I got home and went straight outside -- it had already been dark for an hour and a half!  Oh the humanity!  Can't waste a single minute!  There is so much space to explore...

The routine is quite routine now: pull off the cover, flip the power switch on the Paramount and the focuser, and twist the knobs on the dew heater; plug in the power and USB cables to my tablet; take off the scope caps; double-tap the joystick on the hand controller to home the mount; and open up and connect TheSkyX and Sequence Generator Pro.  Flipping all the switches and twisting all the knobs makes me feel very much like a mad scientist. :D

I hit go in SGP, and then went inside to feed my hungry kitties, Nova and Orion.  (I'm on-theme here y'all!)  While I was doing that, the camera cooled, the mount plate solved & centered, the scope focused, and it was ready to roll! ...except I forgot to connect PHD (the autoguiding software) to the mount and camera D:  So I had to abort the sequence, connect my gear in PHD, hit Resume, and then of course autofocus ran again.  SGP was still tripped up over PHD and wasn't doing things in the right order, so I stopped the guiding in PHD and let SGP start it, since it prefers to do that step itself.  But after centering and focusing, it failed to resume guiding again.  So I tried it again, only this time I let the guiding finish initalizing while SGP was giving me the error message, and I hit "try now" in the recovery options window, aaaaaaaand it started focusing again, of course.  (There should be a check in the software for when it last focused!  Or pull the value from the focuser and check that it didn't change!)

Finally, about 10 minutes later, imaging actually started.  I started a few new targets this time, since I needed some second-half-of-the-night targets now that Orion et al. were transitting around 1:30 AM.  Now, since the latter half of the night is displaying springtime targets, you know what that means -- Galaxy Season approacheth!  And there are not a ton of targets large enough for my Takahashi in the springtime sky.  Eventually, I'm going to have to swap out the Tak for either my C8 or C11, but with the juicy nebula of the winter sky still dominating half the night, that time has not yet come.

So I went a-hunting for targets in SkySafari and on AstroBin.  I came up with a few: the Beehive Cluster, and the Whale Galaxy.  I'm not much for imaging open clusters, particularly in something that doesn't have diffraction spikes -- I don't find my images of them to be that compelling.  (Although I have seen great images from other people).  But I figured I'd give it another shot, especially with the stars in the Tak being so much sharper and cleaner than my previous refractors, my Schmidt-Cassegrains, or my camera lenses.

The Whale Galaxy is just large enough to look nice in the Tak, plus there are a few decently-sized galaxies around it to make a nice image.  If I'm lucky, I can maybe catch some of the gravitational disruption star clouds around them.

Checking the next morning, most of the images came out nicely, with a couple gone to some intervening tree branches.  The Whale Galaxy frames were particularly impressive -- the stars were extremely pin-point!  Either the focuser happened to hit perfect focus, or the seeing was especially good, or something.  Exciting! 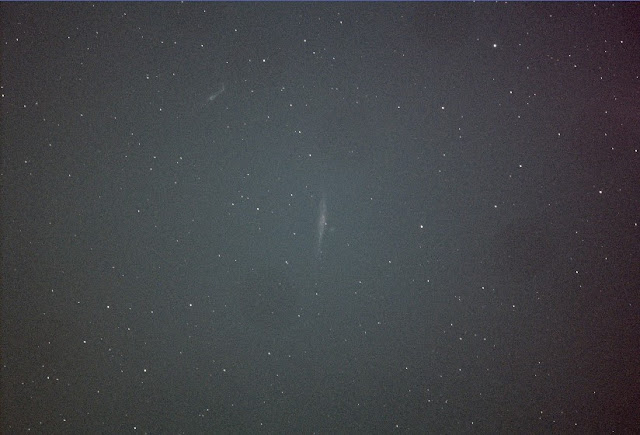