Looks like I got another clear night after all!  Time to get to work.  I've got lots of projects to do.

First, after setting up the second power box I got for the Paramount, I took my 8-inch Schmidt-Cassegrain off of my Celestron AVX mount and replaced it with the Vixen MyStar G-R 200SS f/4 Newtonian.  The Vixen was given to me by a fellow astronomy club member from back in the Midwest, Rikk, and I am very excited to use it!  It's an 8-inch Newtonian with a focal length of 800mm.  While it's a little on the heavy side for my AVX, weighing in at 16 lbs, the relatively short focal length should be pretty forgiving, and I'm hoping to be able to utilize it with my AVX.

When I got it attached to the AVX, I realized that one of the bolt heads on the bottom of the dovetail was pushing the scope up so that it wasn't parallel with the polar axis, which would cause problems.  I needed a longer Vixen-style dovetail, so I hopped onto ADM Accessories and got one there.  I decided to push on with initial testing, however.  I also rolled the Newt over in its rings so that the focuser was facing the ground -- this is a more ideal position for attaching a heavy camera, since the balance is better with that weight being closer to the mount. 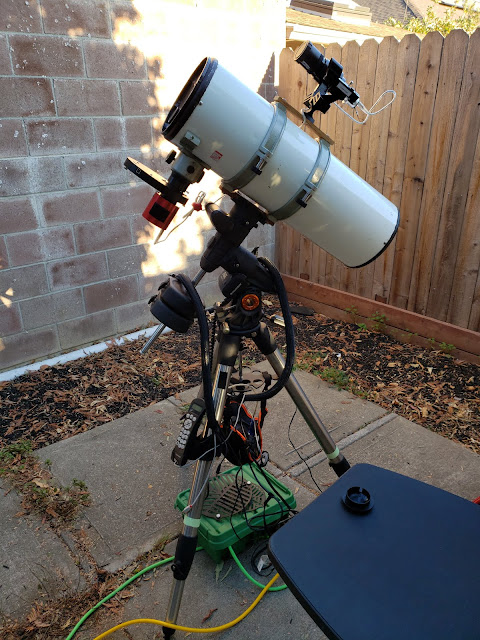 Well ain't that a purdy if unwieldy setup...bless its heart

As I slewed it around to see how it moved with that scope, I noticed that the mount was kind of catching in one area and not slewing correctly in right ascension.  So I popped open the motor housing and tightened the gears to their shafts again.  Problem solved...for now.

Once that was all done, I moved back over to the Paramount and re-attached the focus control box for my Robofocus on my Takahashi refractor.  I powered it on, hit the buttons, and it worked!!  So exciting.

I slewed over to Deneb, since it was visible in the twilight, and used it to focus with my Bahtinov mask, just using the manual buttons on the controller box.  I'll get it trained after I take Miqaela's data, since it would soon be disappearing behind my lemon tree.  I got everything set up by 5 PM, and it was queued to start at 6:30 PM. 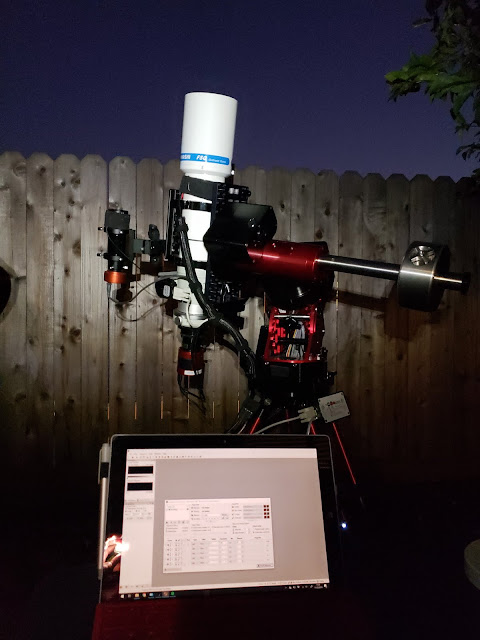 Such a gorgeous creature

The sequence started on time, but guiding in declination went off the rails yet again about 5 minutes in.  I stopped and re-started the sequence, but still got the same problem.  So to get Miqaela's data, I just switched over to TheSkyX's autoguiding instead of PHD's, and got to work Googling solutions.  TSX reported 1 arcsec RMS error, not bad!  RA was the less-good of the two, clocking in at 0.99 arcsec error, while dec reported 0.55 arcsec.

In my online searching, I couldn't find a whole lot of people having any problems with it, so I couldn't find much help.  I went ahead and tried ticking both "enable pulse guide" and "enable direct guide" in the TSX ASCOM driver settings, so we'll see what happens once Miqaela's dataset is done.

Meanwhile, I turned my attention back over to my AVX mount.  I attached my dual-bracket to the top wooden dovetail so that I could have both my Orion mini-guider and red-dot finder attached at the same time.  I happened to already have a red-dot finder calibrated for the Newt that I had done last time I did some initial testing, which was really excellent.  They're pretty cheap, so I just have one for each scope setup now, labeled with label tape.  (I got a label printer a while back...it's awesome!).  I connected the camera to my other laptop and slewed to Deneb to focus.  I had tons of backfocus, woo hoo!  It looked like I wasn't going to have to worry about the typical problem with Newtonians of not being able to focus a camera.  This one was designed with astrophotography in mind I think, however, so the focus point with my camera and H-alpha filter attached as still only about halfway down the total focuser travel.  So I got it focused, but it was hard to see the Bahtinov mask spikes.  I took a short image with the mask off to confirm what Rikk had told me about it: it was, indeed, waaaaay out of collimation!  So I was going to need to re-collimate it before I could image with it.  That sounds like a project for the daytime.

I turned my attention back to the Paramount when Miqaela's star was done running.  The guiding had degraded a bit down to 1.4 arcsec RMS, but that's still decent.  I slewed to my next target and turned PHD back on to test whether it would work now with the changed settings, and it did appear to be working -- woo hoo, finally!

Next, it was time to get the focuser straightened out.  I had to do some re-arranging of the USB cables because the Robofocus software, being quite old, only allows for COM1-8, and the port I had originally plugged it into was mapped as COM12.  I got it over onto a COM6 one, and it connected straight away!!  After having so many troubles with it for the last few months, this was a huge relief!  After confirming that it would, indeed, connect, I did the initialization steps outlined in the manual to calibrate how much travel my focuser had, and to fix the direction -- in vs out were swapped.  That procedure went smoothly.  I needed to have it close to focus in order for Sequence Generator Pro's autofocus routine to work, so I went to the Frame & Focus tab and suffered through the extremely slow download times to focus it using the controls in the Robofocus dialog box.  I adjusted some settings in SGP's control panel based on recommendations I found online.  At last, I ran the autofocus routine, and it worked!  It only took a few minutes too. 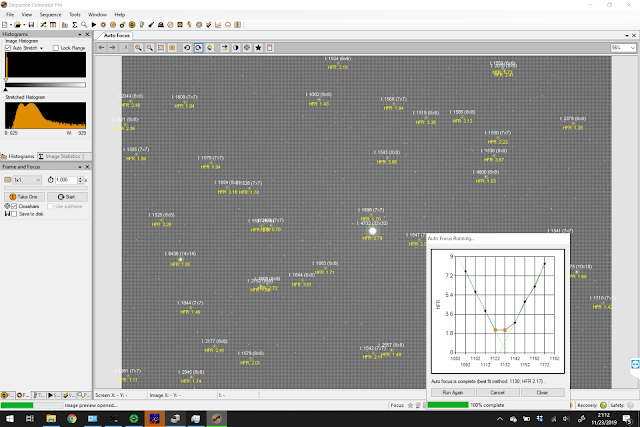 Finally, time to run the rest of my imaging sequence.  I started it....aaaaaaaaaand guiding quit working again in PHD, the dec axis ran away.  Sigh.  So I re-calibrated PHD again, and it was fine for a few minutes, and then went way off in dec again!!  Every time I re-started the sequence, the autofocus ran again, which was time-consuming, but I didn't want to disable that setting because I would need it for future nights (and knew I would forget to change it back!).  While I was trying to resolve the guiding issue, trying different things, it came time already to move to the next target, the Heart Nebula.  By this time, it was 10 PM, and I had hoped to watch some TV before bed, but nooope, none for me!  On the bright side, I watched the Heart Nebula do its meridian flip, and it worked fine, although I'll note that the guiding got kind of ragged after the flip.  Not long after that, the California Nebula started.  I watched the guide graph, and it went off crazy again, but actually managed to recover!  This is such a mystery.

Hopefully I can get all of this straightened out.  Growing pains, I guess!

Table of Contents
Posted by AstronoMolly at 5:07 PM