When I got home from church, it was already dark -- hello Standard Time!  Ordinarily, I don't like it getting dark to early, but it's really excellent for astronomy.  Especially when you live somewhere where it doesn't really get below about 45 degrees F!

I got my rig uncovered and connected -- Celestron Advanced VX mount, Takahashi FSQ-106N refractor, ZWO ASI294MC Pro cooled color CMOS camera, all attached to my Microsoft Surface 3 tablet.  Then I went back inside to hop on The Astro Imaging Channel broadcast chat room, and on my second screen, I monitored the imaging progress using a remote connection via TeamViewer.  Things were running smoothly.  The talk that evening was about professional-amateur collaboration for gravitational wave research, and to get on the mailing list for new events, I needed to figure out how short of an exposure I could get away with and still capture a magnitude 19 star.  But first, I needed to find a magnitude 19 star.

It's not as easy as it sounds.  I looked at several databases that came to my mind -- Gaia, Hipparcos, US Naval Observatory, and one or two others, but none went down to magnitude 19, at least not that you could access.  (Who needs to know stars that dim, I guess??) I was rudely interrupted, however, by an error from Sequence Generator Pro -- the plate solver failed when it was centering my next target, which was M45, the Pleiades Cluster.  I looked at the plate-solve frame -- and it was blank!  So I went over to Cartes du Ciel and connected my telescope to verify where it thought it was pointing.  It was on M45 all right, or at least that's what it looked like -- the Cartes du Ciel star map takes a very long time to load on my tablet, when it loads at all.  So I went outside, and the scope was pointing at the wall!  No wonder I couldn't see anything.  I thought maybe the dec axis had jumped again, so I told it to slew home, which it did just fine (when the dec axis jumps, it loses its encoder position, so it won't slew to the correct home position).  I had it slew again to M45 using the hand controller, and it went to the actual M45 just fine!  So I went back over to Sequence Generator Pro and re-started the sequence, and saw that it was actually trying to go to NGC 2174, which wasn't high enough yet.  After checking through some settings, I figured out that I had accidentally set the end time for M45 to be 12:05 instead of 00:05, whoops!  (I don't set start times to save some work, so it immediately tried to go to the next available target when I restarted the sequence).  Anyway, I fixed the time, and it worked fine after that. 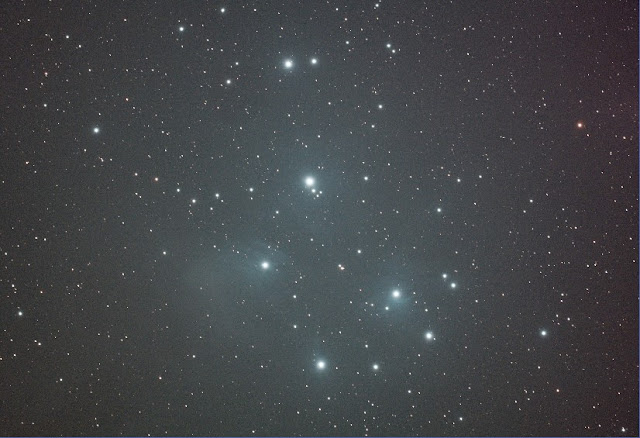 In the morning, I downloaded the frames and started going through them using the Blink tool in PixInsight to check for streaked stars and other issues.  The Flaming Star Nebula only got one good frame right in the middle of its time -- the rest were streaked.  I don't get it!  Most of the NGC 2174 (the "Monkey Head Nebula") frames were bad too; it looked like I didn't have guiding even turned on.  The Pacman Nebula frames were out of focus again due to changing temperature.  It also looks like some thin clouds rolled in toward the morning, since stars were shrinking and fuzzing out in some frames.

When at first you don't succeed, try, try again!

Posted by AstronoMolly at 10:06 PM