With my new-to-me Vixen Newtonian loaded onto my Celestron AVX mount and a clear night ahead, it was time to collimate the Newtonian!  I did this in the afternoon since a buddy of mine from the Midwest sold me a laser collimator on the cheap at the 2017 Green Bank Star Quest.  I did some reading on the procedure and quickly found that there are two schools of thought on which is better to do first: the primary or the secondary.  I decided to align the secondary to the focuser first, and not having a collimation eyepiece, I decided to give the laser a go. 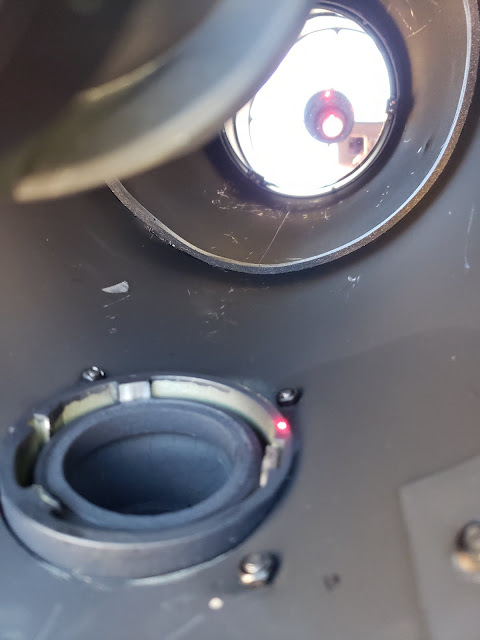 You can see in the above picture that the laser dot was not making it to the focuser tube -- it landed on the edge.  So I adjusted the secondary until it fell into the tube, and into the center of my laser. 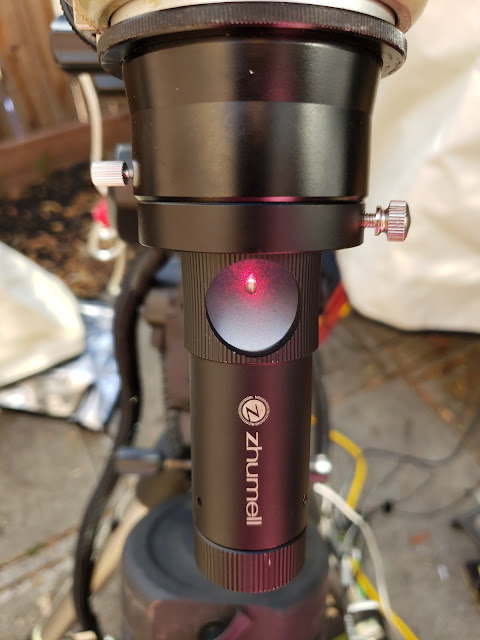 Time for the primary.  When I looked down the tube, I couldn't figure out how I was supposed to be able to tell that the secondary was at the center of the primary, since you can't see the center looking at it directly, since the secondary blocks your vision!  And looking obliquely will obviously give you an oblique view.  I tried getting my cell phone camera in there, but that didn't quite work out either.  To make matters even more complicated, the primary does not have a mark in its center, so I had to guess anyway. 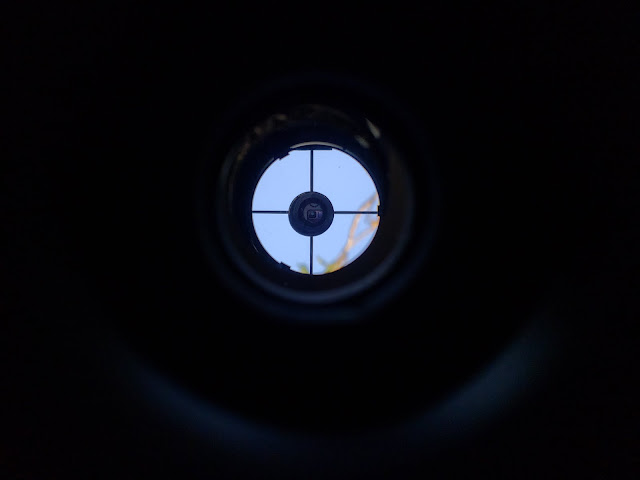 I went to work adjusting the primary -- I wasn't too freaked out about it, since it was pretty far out to begin with.  I felt like I was getting pretty close after a while, but it was really weird -- it seemed like one of the three "corners" was all the way out, and the other two were pretty far in!  That couldn't be right.  I reset all of the adjustment screws so that the mirror was mostly flat with the bottom of the tube, and tried it again.  I got the same result, and when I thought I was getting close to collimated, I ran out of screw on one of the screws!  I also wondered whether the orientation of the laser collimator mattered.  It shouldn't, unless the collimator wasn't collimated...well, I rotated it, and the laser dot moved all over the place!  So that was another problem.  Something was definitely not right, and I was going to need some more experienced help.  I'll chat with some people at the next astronomy club meeting.

After nightfall, I went to work on the Paramount MyT with my Takahashi FSQ-106N.  I did some forum-reading earlier in the day on the runaway guiding issue I've been having on it, and decided to try another driver settings configuration -- I un-ticked PulseGuide and ticked DirectGuide.  I also ticked the "reverse dec output after meridian flip" option in Sequence Generator Pro.  SGP should already be commanding PHD to flip the calibration, but maybe it wasn't, so I thought I'd give it a shot.

While I was testing doing a meridian flip on a star that was near the meridian, I came to realize that the scope was close enough to my lemon tree that tree branches end up blocking the meridian itself, at least to my guide scope.  So instead, I changed my sequence timing so that it didn't do any meridian flips at all -- it moved to the next target once the current one hit the meridian.  This way, I can avoid the problem all together :)  That is a valid risk-mitigation strategy, I swear!

Next, I wanted to see how good the tracking really was on the MyT, especially with the short, forgiving focal length of the Takahashi (530mm).  While imaging the Pacman Nebula in the northeast, I did manage to get 3 minutes with decent-looking stars, but couldn't quite make 5 (this is with ProTrack and PEC enabled).  So better than my AVX, but not mind-blowingly good either.

With my experiments finished for the evening, I turned guiding back on, and it seemed to be running smoothly.  I was getting 1.22 arcsec RMS error, which was mostly in RA (RA was 1.18, and dec was 0.46).  With that humming along...time for bed! 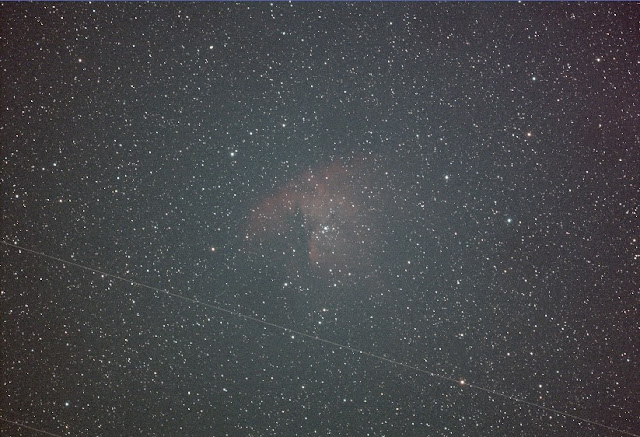 Table of Contents
Posted by AstronoMolly at 8:57 PM