It has been cloudy and foggy lately!  Winter is rapidly approaching the Bay Area.  It will be my first here, so we'll see how things go!  I'm expecting a much more fun winter than the previous places I've lived (and by fun, I mean less cold!)  It's only going to be clear about half the night tonight, according to the forecast.

Since we're approaching a full Moon, I swapped out my color ZWO ASI294MC Pro for my monochrome ZWO ASI1600MM Pro equipped with a hydrogen-alpha filter to cut the moonlight.  The moon still reflects the Sun's H-alpha light, but far less of it, and as long as I don't image too near the Moon, it won't really show up in my images.  So now I can image more days out of the month!

Everything started up smoothly, and I decided to perform a test of my gear -- I plopped the scope on the Bubble Nebula, and took a 10-minute subframe.  It's a big ask for the Celestron Advanced VX mount, but having a short focal length (530mm) is pretty forgiving.  The frame came down...and the stars were stable!  I can take 10-minute subs on my AVX!  This is great news.  My tweaks to the gears have proven effective.  This is promising for eventually putting something with a longer focal length on so I can do more small targets.  I miss imaging galaxies and planetary nebulae...my heavy mounts for my 11-inch Schmidt-Cassegrain have been inoperable for nearly a year and a half now, so I've been pretty much refractor-only.  Don't get me wrong, I love my refractor images, but eventually I will run out of large targets! 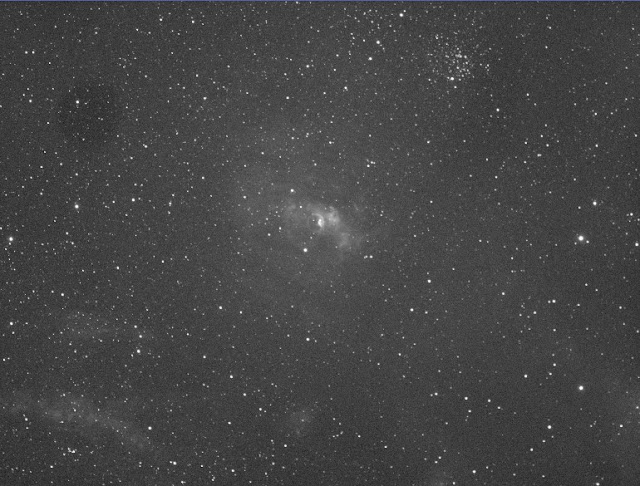 This area has a nice composition for my refractor -- I can see a good amount of background nebulosity, and I have the open cluster M52 in there as well.  Need a lot more frames though!

Despite the grand success of a 10-minute subframe, my celebrating was short-lived -- when it did the meridian flip, the declination axis did the thing it's been doing where it basically seems to stop moving for a couple of minutes up around the meridian.  I turned guiding off, and then a few minutes later turned it back on.  It guided for a little while just fine, and then started running away again.  My mount really doesn't like the meridian!  Maybe I'll just not ever flip, and only image on the east side, 10 degrees or so down from the meridian.  Hmph. 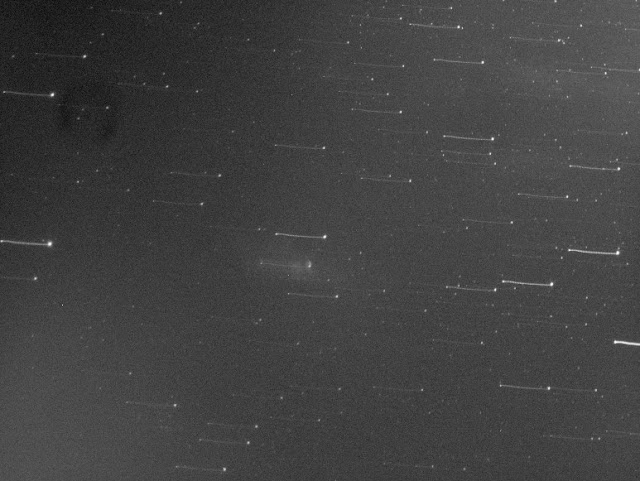 Yucky streaky mess.  This is not even periodic error!

Clouds rolled in after about 9 PM, so I shut down and took darks the rest of the night.

Table of Contents
Posted by AstronoMolly at 2:30 PM