I mentioned in Sunday's log entry that there is a professional-amateur collaboration to look for light sources that correspond with gravitational wave events.  The name of the program is called Hotshots, and you need to tell them what kind of exposure time you need to capture a magnitude 19 star.  Basically, with the three gravitational wave detectors we have, we can roughly triangulate where the event came from, but not quite pinpoint it.  So when an event is detected, people who are registered for the program will get an alert, each with a different galaxy to image and report back on (with redundancy of course -- not everyone has clear skies, or nighttime darkness, at any given time).  But you have to be quick -- they need observations within 5 minutes of an alert!  I searched through some catalogs for a magnitude 19 star to image, but even the APASS catalog only goes down to 17.  So I messaged the American Association of Variable Star Observers (AAVSO) Ambassadors Slack channel (the Ambassador program tries to bring in under-represented groups to the AAVSO -- people of color, women, and young people, largely) to see if anyone had any advice on where to look.

Instead of a catalog, though, I got a really cool project instead -- a recurring, eruptive nova in M31 (like actually in the galaxy, not a foreground star in our own galaxy) had just gone off!  A team has been watching it for months, expecting another eruption after tracking it for several years.  Stella Kafka, the director of the AAVSO, sent me a few papers on it, and told me that it had just hit magnitude 18.9 last night!  So they needed as much data as possible.

I quickly put together a sequence in Sequence Generator Pro, and got to work planning what all I would need to swap out my Takahashi refractor for my Celestron 8-inch Schmidt-Cassegrain.  I was going to need all the aperture and focal length I could get to spot this distant speck of light.  In order to use the C8 on my Celestron AVX mount, however, I needed to use the off-axis guider I (still!) have on loan from Optical Structures that I was supposed to test for them last summer.  (The AVX was not quite up to the task).  But now that I've got the backlash sorted out in that mount and I'm getting 5-10 minute guided images in my Takahashi, I have been meaning to put the C8 back on, but was going to wait until the early spring when it's "Galaxy Season" so that I could continue to image the big juicy nebula of the wintertime Milky Way.  No time like the present though!

I got home from school mid-evening and was ready to get to work, aaaaaaaand it had fogged over! D; It hasn't been very foggy in this part of the bay, not like it gets in San Francisco, but of course, tonight it had to.  But, like all good experimentalists, I already had a backup plan in the works.

I've been collaborating with Brian Sheets, an amateur astronomer out in Utah who does near-Earth object hunting and other astro-science.  I sent him a message asking if it was clear out there, and whether we could high-prioritize this target.  He said of course!  So I got the imaging run details plugged into his DC3-Dreams ACP software on the remote website.  He's got a 14-inch Schmidt-Cassegrain with a SBIG camera that has giant, light-gobbling 24-micron pixels.  He doesn't have an autoguiding rig set up on it yet, but I had a feeling that I'd be able to catch it with those giant pixels, even with only 1- or 2-minute exposures.

By 8 PM, the sequence still hadn't run yet (I was watching it closely on the website!), so I messaged him to see what was up.  He had the software coded to image primarily up around the meridian for the best atmospheric conditions, and M31 wasn't that high yet.  He changed some parameters to let it run anyway, and I got about 10 frames before I went and checked them and changed the exposure time from 3 minutes to 2 minutes to avoid saturating any of the reference stars and avoid possible tracking errors elongating the stars.  As I was re-submitting the edited plan, his observatory network crashed!  Brian got it back up and running, but by then it was time to execute the meridian flip, which takes a little time.  It would be about 9:35 PM before it was ready to roll again.

So I took one of the frames and pulled it over into PixInsight to double-check that the scope was pointing in the right spot, and see if I could see it.  I pulled up the finder chart that Dr. Kafka had sent me, but I was having a hard time comparing the two because of the difference in scale. 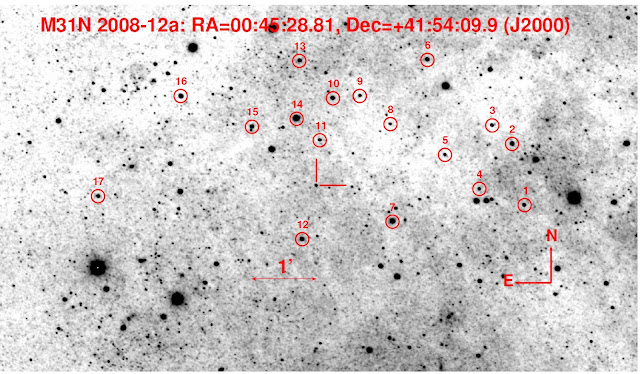 The finder chart Dr. Kafka sent me -- the image was from a previous observation of the nova.  Also included in the PDF was a table of coordinates and measured magnitudes of the reference stars circled and numbered in the image.

So I plate-solved and annotated it in PixInsight, which allowed me to hover over parts of the image and see their exact, plate-solved RA and Dec coordinates from the APASS database. With that, I found the reference stars by their coordinates, pieced together some shapes to star-hop to the nova, and boom, there it was!  I found it!!  It was a dim smudge, but it was there.  I'll stack the images next to get better signal-to-noise, and it should pop out.  This is SO EXCITING!! 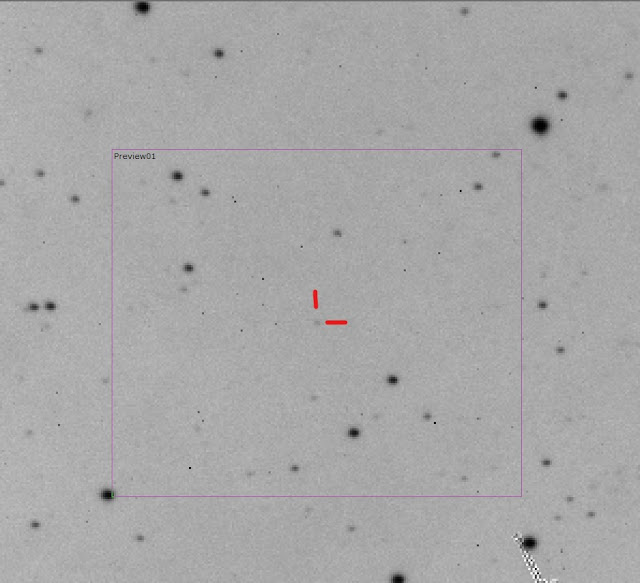 I went and checked on the scope at 9:36 PM, but the plan had interrupted, and the dome was closed!  I messaged Brian again to find out what was up -- he said that the scheduler was just acting weird.  It was imaging again by 10 PM.  I wound up with 53 frames of it that night through a luminance filter, a very nice amount to stack.

The nova is roughly here: 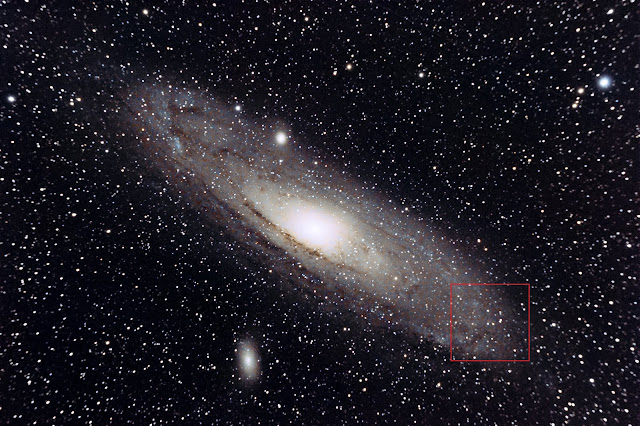 And here's the stacked, inverted image, rotated to match the finder chart: 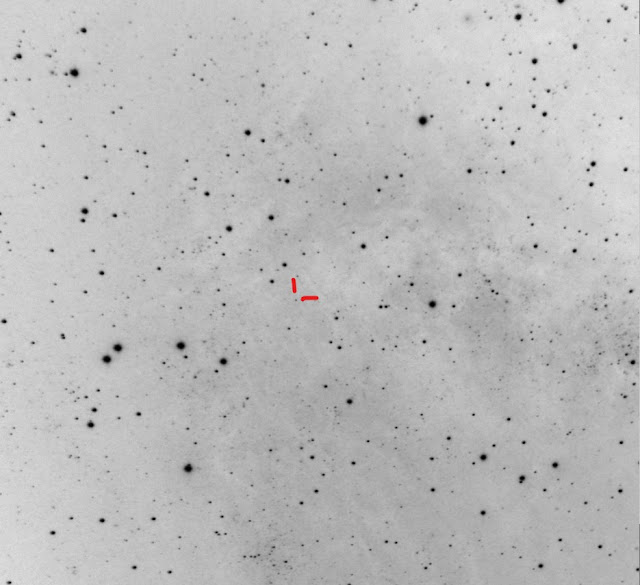 The nova is in the crosshairs again here in this inverted image.  I also love how you can see the nebulosity of the galaxy there in the background.  So cool :D  I want to do more of this!!  Now I need to figure out how to measure its magnitude.

M31N 2008-12a is an erupting nova that erupts roughly every year. It's a supermassive white dwarf star near the Chandrasekhar limit, which is the limit in mass that a white dwarf can exist and be stable (this is about 1.4 times the mass of the sun). This means that it will likely go supernova sometime in the next thousand years or so.

Erupting novae occur when a white dwarf star is in a binary system with another "normal" star (like a main sequence, subgiant, or red giant star), and they orbit closely enough that the white dwarf sucks off mass from the companion star (a process called accretion). This creates a dense, but shallow, envelope of hydrogen around the white dwarf, which is heated by the white dwarf and eventually reaches a high enough temperature to ignite fusion. This blasts that outer shell out into space, vastly increasing the brightness. This change in brightness typically fades over weeks or months, but in the case of this nova, it tends to drop a magnitude roughly every day. So we caught it just in time! The fact that this one erupts every year is unusual -- that's a rather short timespan among novae.

Using Brian Sheets' scope, I imaged the nova for two more nights to watch it dim.  I took fewer frames on the subsequent nights so as not to monopolize telescope time (and I didn't need a whole lot of them to see the nova), so the other two nights' images are noisier.  Here's the comparison image I made:

This was really cool!  I went ahead and bought a 1.25" filter wheel carousel for my Starlight Xpress filter wheel so that I can load my Johnson-Cousins photometric filters in it -- I have an incomplete set, missing the UV filter (potentially -- there's one filter I got with several from a former fellow astro club member that I haven't quite figured out what it is), but I have the IR, R, V (visible), and B filters. so I can do photometry!  I haven't had time to learn the software yet, but Dr. Kafka sent me some info, and I've got several people I can ask.  I also need to do some camera sensor characterization.

Can't wait for more!  Especially now that I have a semi-permanent setup, I won't necessarily feel like I'm "wasting" clear sky time, especially since I get far more clear nights here in California than I did in the midwest.

Table of Contents
Posted by AstronoMolly at 2:14 PM