Happy Halloween!  I skipped my evening quantum mechanics class so that I could pass out candy to trick-or-treaters, which I was really looking forward to.  I dressed up as a mad scientist (of course!), and I put my Bluetooth speaker outside with some kid-friendly Halloween music blaring. 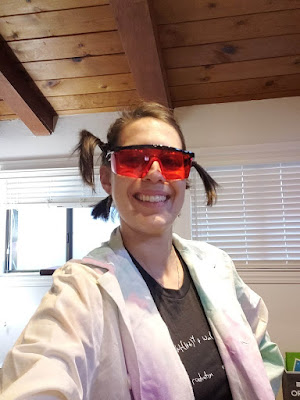 In between groups of kids, I ran out to the backyard to get my scope set up -- Takahashi FSQ-106N on my Celestron AVX mount.  After starting it up, I checked back in on it from inside on my phone using TeamViewer, and saw that the stars looked funny -- I had left the Bahtinov focusing mask on my accident!  So I dashed outside and yanked it off, and then it continued to image while I passed out candy.  I adjusted focus one more time before I went to bed around 10:30.

I checked on the images in the morning, and had mostly bad results, unfortunately.  I only got one frame of the Flaming Star Nebula early in the morning that wasn't streaked, and it was out of focus, of course.  Most of the rest of the images were also out of focus -- Heart Nebula, M42 Orion Nebula, Pacman Nebula, and Rosette Nebula.  M31 Andromeda Galaxy had some good ones at least, although there were a few where the tracking wasn't good.  The weird part is that those bad frames were spaced far apart in time, so like one frame would be bad, and the next fine.  Weird.

In any case, it was a fun, clear Halloween!

Table of Contents
Posted by AstronoMolly at 10:12 AM