Yes, you read that date right -- the very night I got home from the Advanced Imaging Conference, I started getting my gear set up!  I must be the luckiest astronomer ever -- got an amazing piece of new gear, and the skies were clear!  For any non-astronomers reading this, only three things are certain in life: death, taxes, and new gear = cloudy skies.  Not today, Murphy! 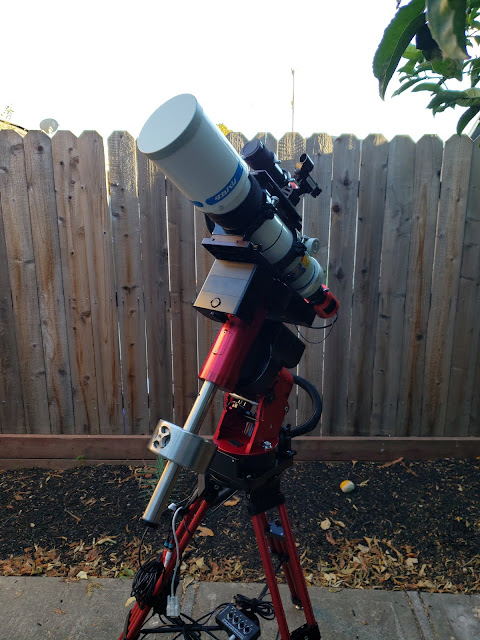 And the angelic voices did sing unto the heavens...

Unfortunately, I didn't have my license key for TheSkyX yet, so there would be no imaging on that mount tonight.  I decided to put the Takahashi on it for commissioning because it has fewer complications than one of my Schmidt-Cassegrains.  Worry not, however, I will soon be plopping my C11 on there at long, long last, if all goes well!  Jeez, when was the last time I got an image with my C11...must have been the 2018 Texas Star Party, although I don't think I've gotten a complete (all color channels) image on it since Green Bank Star Quest 2017.  :O  (I went and double-checked my data log spreadsheet...it's true!)

It didn't take me long to get it set up.  It was much easier for me to lift than my CGE Pro, and the whole mount head was in one piece instead of three.  It's all tool-less, which is always appreciated, especially when one has to work in the dark sometimes!  One thing I really like about the new tripod (although I'm not sure if this is unique to this tripod or not) is that I can rotate the whole mount head on the tripod without having to pick it up.  The attachment from the mount to the tripod is one center bolt (sort of like my Celestron AVX), and you can loosen it to rotate the mount.  What this means is that if I have a bad guess on where north is, I don't have to pick up the whole mount to turn it!  There is also a built-in level, and it is actually possible to extend the tripod legs while it's loaded because of the way it's built; the pressure isn't directly on the bolt.  In addition, each foot is actually a long bolt that can be turned with a hex wrench for fine-tuning the leveling when it's already all set up.  I haven't tried this yet, but this will help a lot when I'm not on cement!

Since I couldn't do much with the Paramount that night, but it was a clear night, I decided to try again with using my 8-inch Schmidt-Cassegrain on my Celestron AVX now that I've cleaned up the backlash in the gears, and put that Lumicon off-axis guider I still have from Optical Structures to work.  Yes...I have two mounts set up now! :D:D:D:D 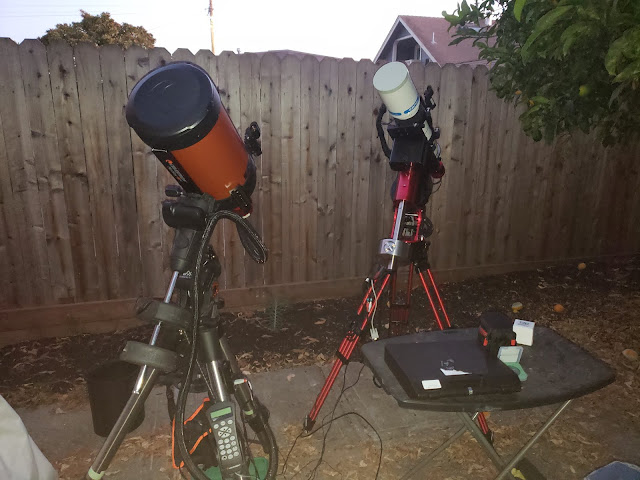 The picture above is from before I balanced the AVX -- unbelievably, the C8 is actually ligther than the Takahashi, and I had to take off one of the counterweights (since I wasn't using my filter wheel or a guide scope).  Since I hadn't used the OAG in a while, it took me a bit to remember who the focal reducer, OAG, SCT-to-2-inch adapter, and camera all went together.  After I aligned the mount, I went to focus the guide camera on the star Hamal, but first I had to find the star.  An off-axis guider has a small prism in the light path but just off the edge of the main imaging sensor that deflects some of the light up to the guide camera, so I slewed the star off of each edge of the main camera image, hoping it would show up in the guide camera.  It didn't, but it might also have been way out of focus, so I threw on eyepiece on there instead to see what was up.  At first, it was so dark I thought I must have put the OAG on backwards!  But I eventually found it.

I put the guide camera back on, but I couldn't reach focus.  The Lumicon OAG I'm testing was pre-configured for the spacing of a ZWO camera with a filter wheel, so I was going to need an equivalent spacing.  I looked up pictures I had taken the last time I used it to see how I had it put together.  I had forgotten that I had to have both the filter wheel and a 21mm spacer!  I guess some extra backfocus was included in it for other accessories or thicker filter wheels or something.  I was using my ZWO ASI294MC Pro, a color camera, but I put the filter wheel on anyway (just with a blank slot in front) for the extra separation.  I was finally able to get the guide camera close to focus, although the stars had a funny shape.  I seemed to recall that the brighter stars can do that, especially if they're more toward the edge of the prism.  I also seemed to recall that PHD can handle oddly-shaped stars since it calculates a centroid.  So I slewed to the Double Cluster for testing, but couldn't see any stars in PHD to get closer to focus.

I finally gave up and decided just to not guide and see what I could get.  I had the focal reducer on, so my focal length was about 1263mm, which is a little more forgiving of tracking errors.  I took some 60s exposures, and some of them were coming in with round stars, so I went ahead and rolled with that.  I set up a sequence to image galaxy M77, the Little Dumbbell Nebula or M76, and a nebula in Orion known as M78.  (Messier numbers in a row!)

During alignment, I had noticed that the RA axis had some backlash, and dec sometimes hesitated before it started moving as well (although it didn't drift after I stopped like RA did), but I decided I didn't feel like dealing with it at that moment.  As a result, the stars were streaking during the exposures that Sequence Generator Pro takes for centering the target with plate solving (since it slews first, and there's no option for settling before centering -- only after a meridian flip), so I had to turn off centering for all my targets and hope for the best.  M76 was fairly close to center, but M77 was not even in the frame, I don't think.  M78 was pretty off-kilter. 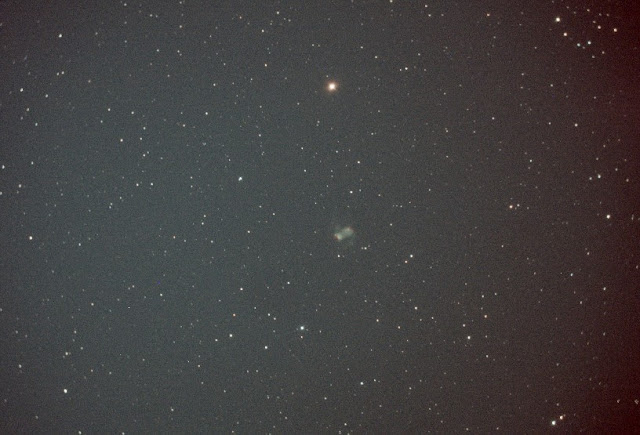 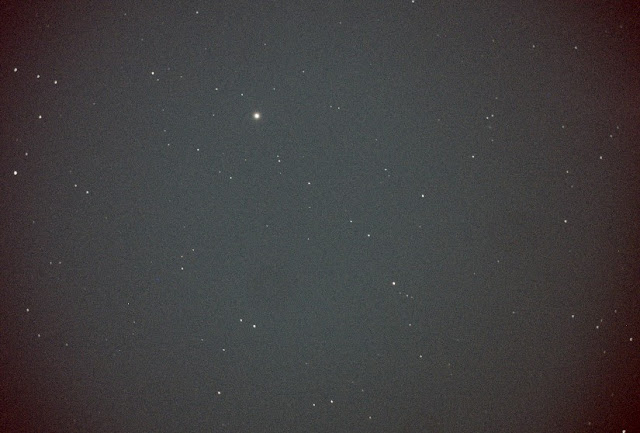 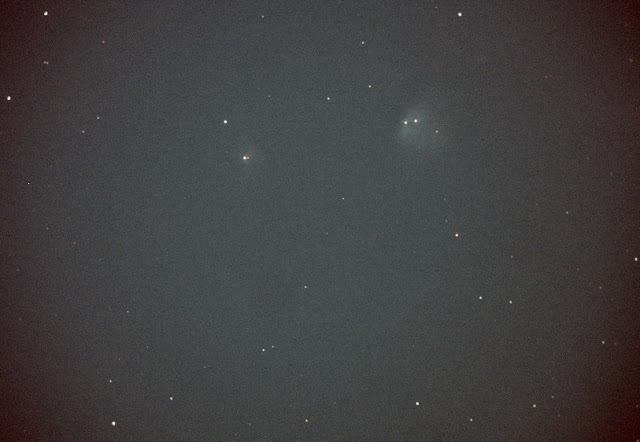 As it turns out, M77 was not even near where the scope was pointing for that imaging run -- I plate solved it on astrometry.net, and looked at its placement on WorldWide Telescope, and nooooope! 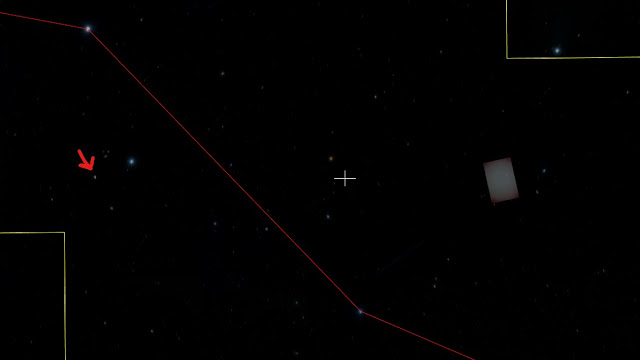 For size reference, my image (the bright rectangle) is about a degree in width.  The red arrow I drew points at M77.  Sheesh!

So not much will be coming out of here for the time being, until I get around to dealing with these issues...oh well.  It's an experimental testbed setup now -- all the good stuff will be coming from my new Paramount! :D

Posted by AstronoMolly at 5:13 PM