The evening sky was hazy, so it wasn't a good night to image, but it was fine for doing some work -- namely, training PEC (periodic error correction).

Periodic error is a result of it being impossible to perfectly machine gears.  The result of this is imperfect tracking -- even if your mount were perfectly polar aligned, the stars would still streak a little, since the imperfection in the gears means that perfect tracking is impossible.  You can always just autoguide, which takes care of both polar alignment error and periodic error, but you can possibly get better results if you remove some of the work for your autoguider by training a correction algorithm.

Generally speaking, to train PEC, you follow a star to see how it moves naturally due to errors in the gearing over several revolutions of the worm gear, and then that recording gets "played back," in reverse, to "undo" those errors.  Different mounts and different software have various ways of doing this.

I followed this tutorial for performing PEC.

TheSkyX, as you might guess, has a tool for this.  To start with, you need to connect your main imaging camera to TSX, disable autoguiding, turn off T-Point modeling, turn off ProTrack, make sure the mount is set to track at sidereal rate, unplug guider cables and even the joystick, and orient the camera so that north is up.  Sometimes it can be hard to tell which way is which on the camera, but luckily for me, you can use the image link feature (plate solving) to determine what angle your camera is at, and whether the camera reads out mirror-imaged.

The first step is to log the autoguider data in TSX without actually applying the corrections.  This is done in the Telescope Setup window in the Autoguiding tab.  Then you choose a star on the west side of the meridian, near 0 degrees declination, and near the meridian.  You also set a look-box that contains the star you're using, and it has to be large enough so that the star doesn't drift out of it.  I tried 32x32 at first, but it drifted out before the run was over, so I had to increase it to 50x50.  It still left the box, but not until the very end. 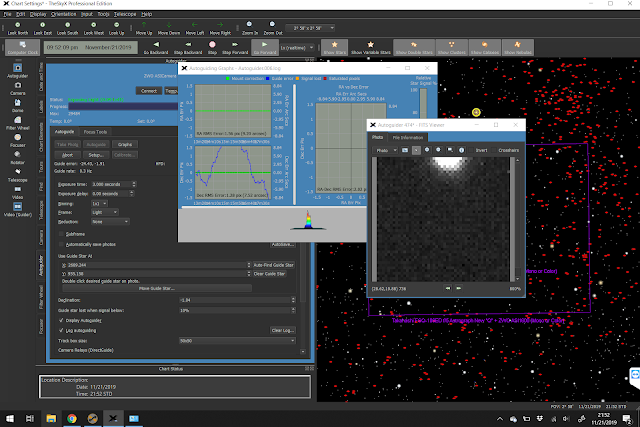 While it was logging, I wasn't sure that PEC training was going to work because it drifted so far (the mount is polar aligned, I swear!).  It takes about 20 minutes for the MyT to go through four periods of its worm gear, so I let it run.

Once the logging is done, you go to the Bisque TCS window, and then to the Periodic Error Correction tab to load the log. 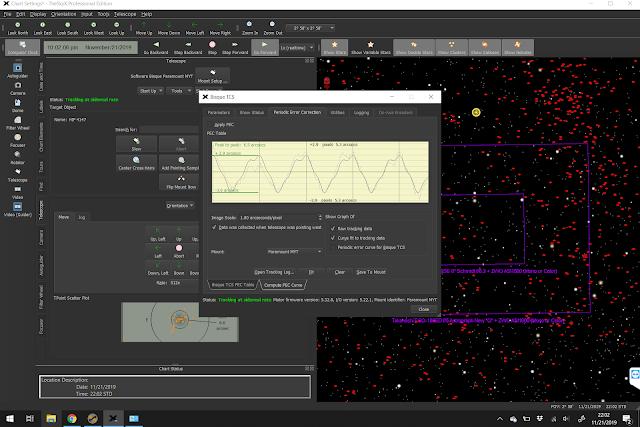 Raw data is the light blue, messier line; the curve fit is the darker, bolder line

While my guide graph showed RMS errors as high as 7 or 9 arcsecs, I guess the software is able to subtract out other error sources (namely, polar alignment) and see just the PE.

Finally, you tell the software to fit the curve, and it runs whatever calculations it does to figure out the PE.  It told me on the graph that the peak-to-peak PE is 6.5 arcsecs.  While this is not awesome, and means I'm definitely going to have to guide unless I just use a camera lens on it, it does indeed satisfy what the Software Bisque folks told me: they don't let a mount walk out their door unless the peak-to-peak PE is less than 7 arcsecs.  Woot!

Once that's done, then you send the data to the mount, and enable PEC.  Next, time to test!  I enabled guiding in PHD and turned ProTrack back on as well.


Now that that was taken care of, and the sky had cleared out, it was finally time to image!  I started the sequence in Sequence Generator Pro and went inside to watch the progress from my desktop.  Things went bad quickly though -- the plate solve image came down, and I saw that it was heavily out of focus! 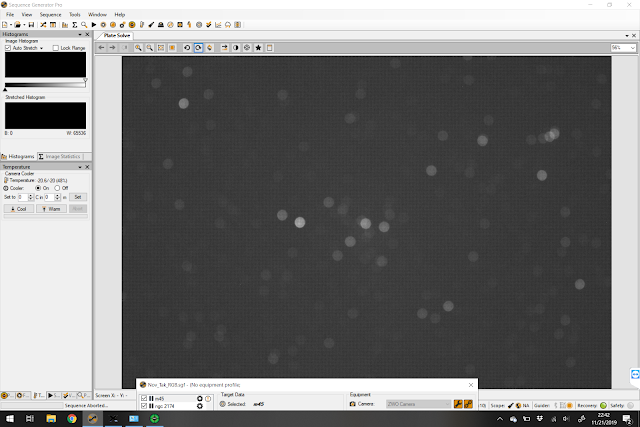 I must have not put the camera all the way back in from when I rotated it for PEC training.  So I ran outside, pushed it all the way back in, and then went back inside.  Good to go!  The sequence finally started at about 10:50 PM.

But the goodness would not last.  Within a few minutes, PHD started doing the same thing as last night, where the dec axis ran away.  I double-checked that PulseGuide was the selected option, not DirectGuide, in the TSX ASCOM driver settings.  I tried it without ProTrack -- same thing.  Then I decided this time to try re-calibrating PHD, just in case.  Things seemed to be working, so I finally made it to bed at 11:25 PM.  My guiding was significantly improved from last night! 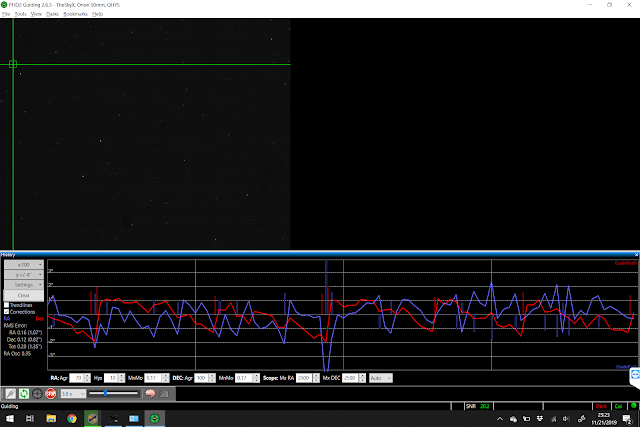 In the morning, I peaked outside to see whether it had parked this time, aaaaaaand it had not.  In fact, it was leaning way back, and stopped at its hard slew limit!  There were no error messages in Sequence Generator Pro about it.  It looks like from the sequence that it didn't meridian flip during the California Nebula.  I watched it flip just fine last night, so I'm not sure why it didn't this time.  SGP did crash this morning though, so maybe there was some other error.  We shall never know.

Table of Contents
Posted by AstronoMolly at 4:09 PM