I got another clear night with the Paramount, so soon after acquiring it!  Truly an anomaly to not have clouds for two solid weeks after getting an awesome new piece of gear. :D

After Monday night's guiding calibration issues, I reached out to my astro-buddy Tolga for some advice.  He let me know that I needed to set the guide mode to DirectGuide, so I tried that, and the problem was solved!  Easy-peasy.  Autoguiding calibration in TheSkyX was super fast!

I had my ZWO ASI1600MM Pro attached for alignment and testing, but I had a new project I needed to put my ZWO ASI294MC Pro color camera on for -- imaging a special pair of stars for my astro-minion Miqaela back in the Midwest.  She's a college student that I've been mentoring and teaching astrophotography to since she was in high school, and she's majoring in astrophysics! :D 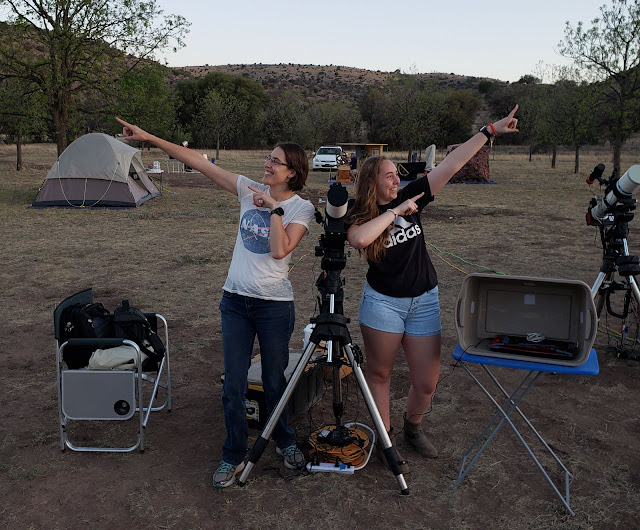 Miqaela and I at the 2019 Texas Star Party, with her rig

Back in November 2018, Miqaela imaged a star that her family got named in honor of her cousin Deven, who committed suicide in April 2018.  I helped her process the image, and then she got it printed and gave it to her aunt.  It was a very sweet and meaningful gift.  It's through the website Name A Star, and it's not official, but still personally meaningful.

In August 2018, Miqaela's aunt's mother (different aunt) passed away, and her aunt was inspired by naming the star for Deven, so she did the same for her parents, Ron and Marge.  She got a double star named for them to enshrine their memory into the heavens.  Since Miqaela is at school and hasn't been able to image much, she asked if I might image the double star for her so that she could get it printed for her aunt.

I went and looked at the coordinates she sent me, but they weren't quite in Aquarius like the certificate said they were, and I didn't see a double star there on the sky charts.  But the certificate also had the catalog number from the Washington Double Star Catalog -- WDS STF2887.  SkySafari doesn't have this catalog, and I had some trouble trying to use the catalog on the US Naval Observatory website, but unbelievably, TheSkyX has this catalog!  So I finally found it there, zoomed in, and it did look like a double star on the sky map, at least.  So I set the coordinates in Sequence Generator Pro.  However, talking to Tolga and working out a few other issues took up enough time that evening that the double star slipped behind my lemon tree before I could catch it.

My next task for the night was to work out the kinks of using Sequence Generator Pro with TheSkyX.  SGP can't control the Paramount directly with an ASCOM driver like my Celestron mounts, but rather it communicates to TSX, which communicates to the mount.  The main problem I was having after getting it set up last night initially was that fact that SGP can't control the autoguiding in TSX like it does in PHD.  When SGP talks to PHD (so many TLAs -- three-letter acronyms!), it can tell it to automatically find a guide star, start guiding, stop guiding, and even command it to calibrate.  Not so with TSX.  While I could give it a guide star in TSX, when I changed targets, I would have to manually select another guide star, which obviously wasn't going to work for automation.

So instead, I attempted to connect PHD to TSX for guiding, and it was able to connect and calibrate.  However, the guiding kept running away in declination.  Maybe it was interfering with ProTrack?  I tried disabling it, but it was still running away.  So I went into the TSX driver settings in SGP and disabled DirectGuide and enabled PulseGuide instead, which is the type of guiding that PHD does.  I turned ProTrack back on as well.  It did work this time, but the guiding error was pretty bad -- 2.5 arcsec RMS, and sometimes even higher than that. 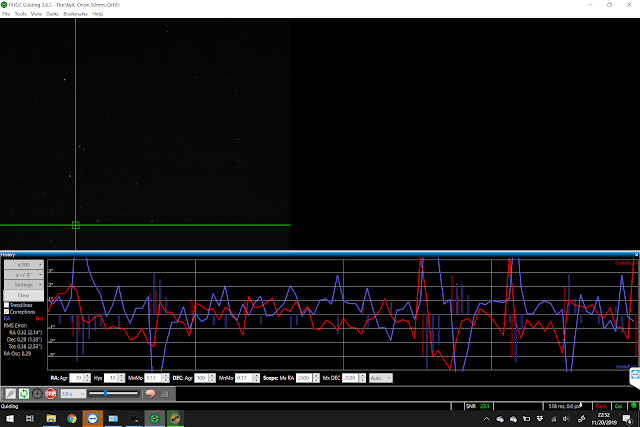 I think I need to train PEC (periodic error correction) and add more points to the T-Point model for ProTrack -- that should hopefully help.

I updated the target end times in SGP and started imaging.  The first frame came back with some nice round stars at 5 minutes. 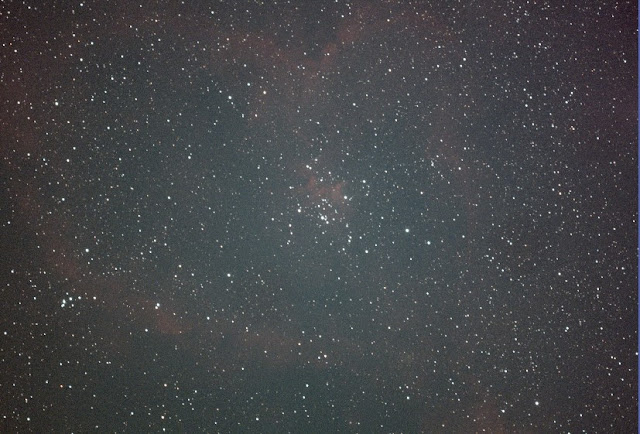 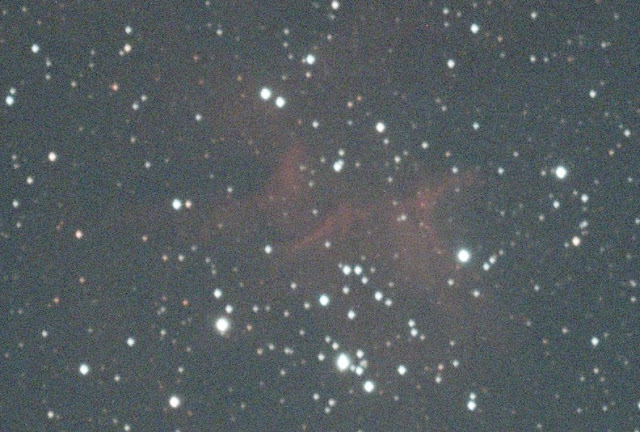 An interesting consequence of guiding is that ProTrack is showing 0 error, haha.  Probably don't need to run both, but some people online said it was fine.  I'll experiment.

I went to bed, and checked on how things went in the morning -- the mount was pointing northish, but it wasn't in the park position I had defined.  SGP stopped during the Heart Nebula early in the night, unfortunately.  It looks like from the images that it slipped behind the tree, which isn't a big deal (I'll just delete those frames), but the sequence never advanced to the next target.  I'm not sure why.

On Nov 23rd, I was finally able to image Miqaela's double star, and I processed it today. 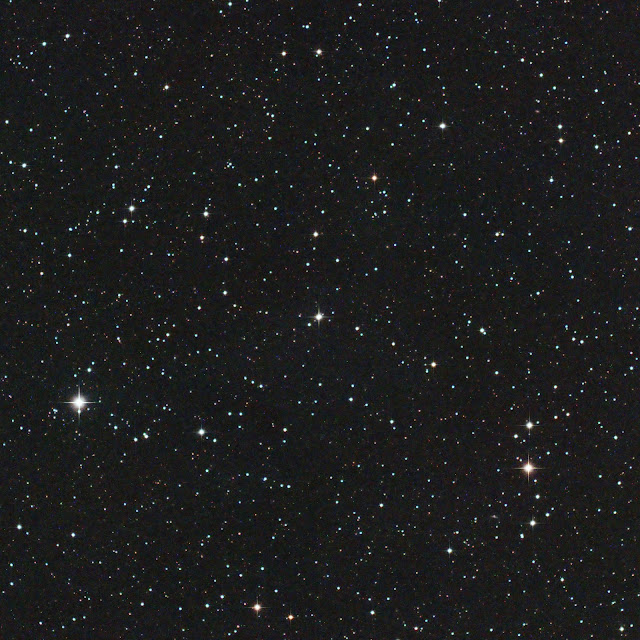 I added the diffraction spikes artificially in Photoshop using the Carboni tools to make it a little more visually pretty.  It's roughly in the middle, although I had a hard time figuring out exactly which one it was.  A fun and memorable little project!  And a meaningful gift for Miqaela's family.

Table of Contents
Posted by AstronoMolly at 10:44 AM