Occurring only 13 or 14 times per century, Mercury transits are relatively rare, but definitely catchable a few times in ones' lifetime.  I missed the more-rare transit of Venus in 2012, since it was a few years before I got into observational astronomy.  But I had marked my calendar well in advance of the Mercury transit!

Mercury and Venus transits occur more rarely than once per year because of the inclination, or tilt, of the planetary orbits.  Not only does Mercury need to cross between us and the sun (which happens far more often, given Mercury's 88-day orbit and Earth's 365-day orbit in the same direction), but both our own planet and Mercury need to be at the same orbital "level" when they do meet. 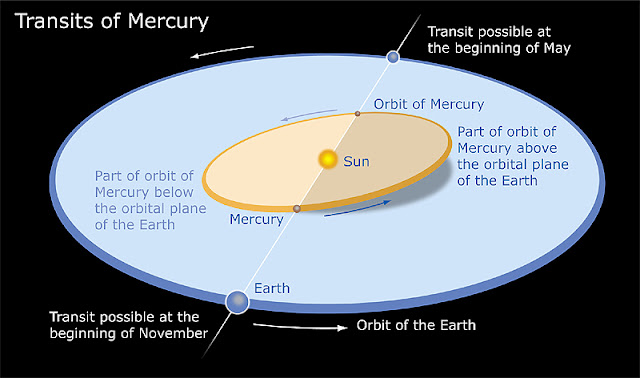 Because of the orientation of the orbital planes, Mercury transits can only happen in May or November!  Crazy stuff.  Also, the transits are not evenly-spaced -- the last one took place in 2016 (I missed it because I had just started a new job, and couldn't exactly just be gone half a day so soon!), but the next one won't be until 2032.

Here in California, we didn't get to see the whole transit, since it started before sunrise in Pacific time -- we only got about half of it.  But they are quite long, and even from here, we saw it for about 4 hours.  But that was plenty -- really, Mercury is just a tiny black speck as it crosses the Sun's surface, not even visible with just solar eclipse glasses; you needed a telescope to see it.

Last night, I staged all my gear in the living room:
- Celestron NexStar SE mount and tripod
- Celestron 8-inch Schmidt-Cassegrain
- ZWO ASI1600 MM Pro monochrome camera
- Home-built solar filter cell
- Eyepiece case
- Tool & spare parts box (you never know when you -- or someone else -- will need something!)
- Folding table
- Folding chair
- Celestron Power Tank battery
- Microsoft Surface 3 tablet
- Solar eclipse glasses (for use with the (non-magnifying) finerscope)
- USB and power cables
- Brand-new folding wagon I just got to haul all of it!

I brought the NexStar mount because, being an alt-az mount, it does not require polar alignment, and is thus much easier to set up during daylight.  I just have to point it at the Sun, say "hey mount, it's the sun," and it tracks it pretty decently.  I used the C8 telescope because of its long focal length.  I went with the monochrome camera because with Mercury being so small, I was going to need all the real resolution I could get, which is higher with monochrome cameras (and this monochrome camera also happens to have smaller pixels, by 0.5 micron, than my color camera).

I got up at 4:30 AM, got ready, and got the car loaded.  I took off about 5:45 AM, but I had to stop for gas on my way out, since I forgot to do it yesterday.  Then I had to stop at another gas station because I forgot to grab water and snacks.  *sigh* I finally made it to the Pleasant Oaks Park in Pleasant Hill by 6:45.  The Mount Diablo Astronomical Society invited the Eastbay Astronomical Society (of which I am now a member) to view the transit with them from there.  It wouldn't really happen from the west side of the hills closer to the bay where we live, since of course the sun rises in the east, and the hills would block it! Sunrise was 6:45, but it wouldn't be cresting the hills on the other side of the town until after 7.  Everyone else was already there and set up, so I moved as quickly as possible!  Luckily, thanks to the new folding wagon and the roller case my astro-buddy John gave me that neatly fits my mount and telescope, I was able to get all my gear across the street and onto the baseball field in one trip.  The sky was brightening, but the sun hadn't shown up yet. 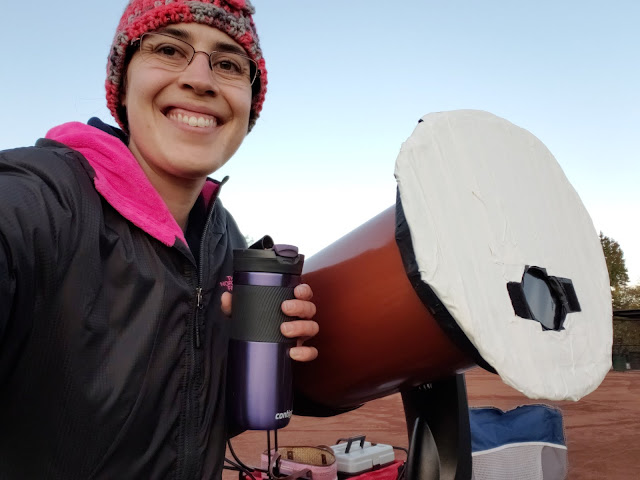 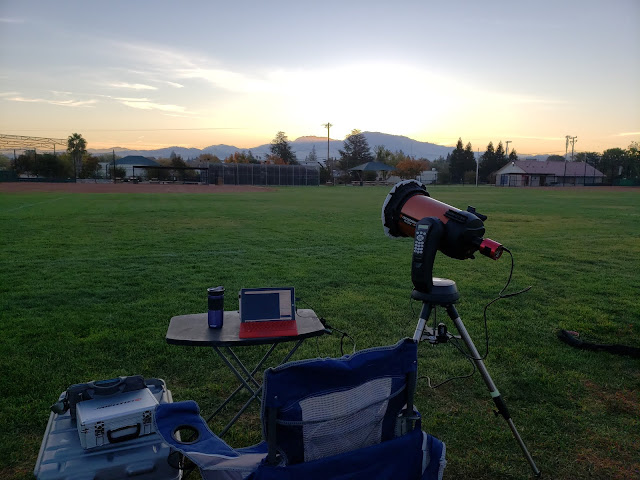 I was set up and ready to align on the sun as soon as it crested the hill.  It was a little chilly, but just fine with my lightweight jacket, fleece hat, and coffee mug.  We saw the sun break over the hill, and I was already almost right on top of it, and wow did it look incredible in the camera!  I also happened to be very close to focus, so I quickly started taking a video as the sun rose.  I'm so glad I did -- I got my favorite shot of the whole day right then! 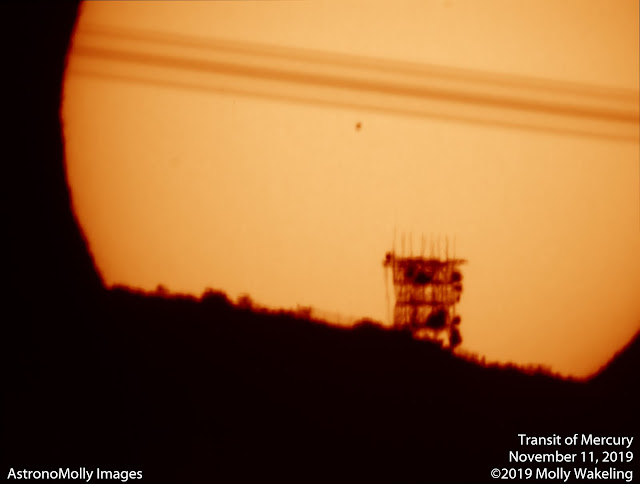 Power lines, hilltop, and radio/TV tower, with the speck of Mercury just below the power lines.  Colorized in Photoshop.

I got the brightness settings adjusted, and let the video roll for about 2,000 frames.  Mercury was bigger than I thought it would be!  It was so exciting to see it.  Then I took another 1,000 frame video, aaaaaand my hard drive was full!  (The tablet has a little 128 GB solid-state hard drive).  Not to worry, I'd brought a USB 3.0 external hard drive just for the occasion.  Unfortunately, my USB hub couldn't power my power-hungry spinning external drive, so I gave up on that and used the new USB 3.0 flash drive I had just gotten,  Unfortunately again, even though it was advertised as 3.0, I was not getting 3.0 speeds.  Usually, monolithic files like videos copy the fastest, but this was still chugging along at something like 25 MB/s.  It wound up taking an hour to copy just those two videos over.  Eventually, I just unplugged the camera and plugged in my external hard drive directly to get it all off so I could start recording again.

During all of this, my tablet crashed three times as well.  The first time was a heat shut-down (just like what happened during the 2017 solar eclipse), so I used my eyepiece case to create some shade.  The second two were from my ZWO camera draining the battery on my tablet.  I had it plugged into the 5V, 1.5A USB port on my Celestron Power Tank, but the tablet really needs the full 2.4A it can take to not die while running the camera.  Luckily, my new-ish external cell phone battery than I got for playing Ingress, Pokemon Go, and Harry Potter Wizards Unite had a 2.4A port, so I ran it off of there instead.  Then it finally stayed alive.

While I was waiting for files to copy, I hopped around to a couple other telescopes to take a peek through some eyepieces. 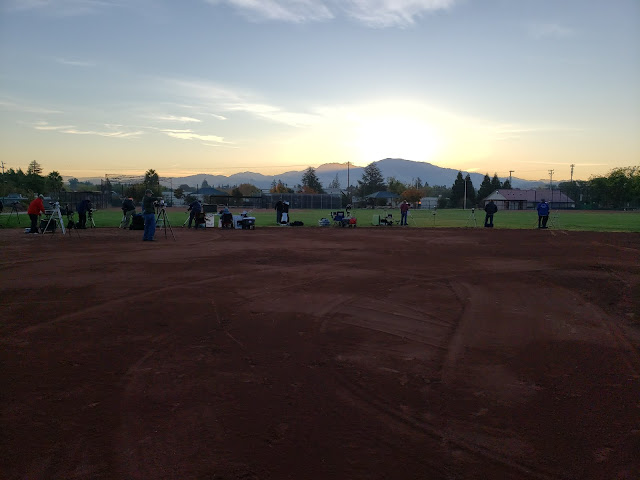 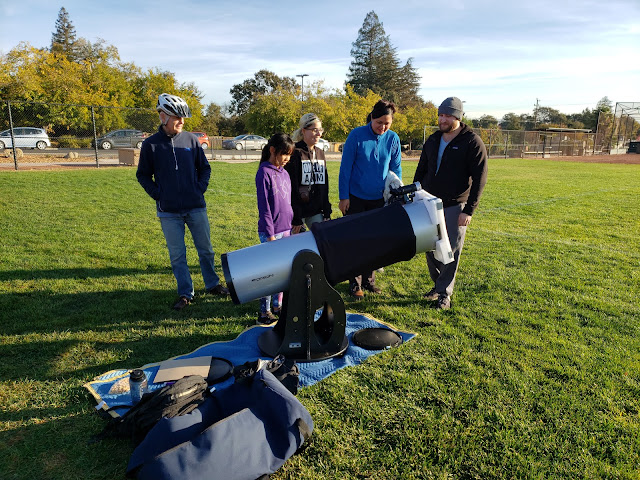 Some members of the public showed up as well, which turned this already-fun event into an even-more fun outreach event!  I also had quite a few club members come by my rig to check out how I was doing the imaging.  Most people there were doing visual observing.

At last, in the last 45 minutes or so of the transit, the videos finally finished copying to my hard drive (as well as a few more I had taken before detaching the camera), and I could take a couple more videos at the very end.

The white tape I added to the front of my solar filter really helped a lot to keep the heat down.  The first time I tested it out in my yard with black tape, the air between the filter and the objective had become quite hot, but this time everything stayed cool!  So that worked out nicely.

I had a difficult time processing the videos, since RegiStax balked at the large file sizes and AutoStakkert was giving me tons of weird artifacts, but I got a few processed.  I didn't do the rest because the seeing wasn't great, and there were some thin hazy clouds, so to be honest, the images are quite boring.  Which is why the radio tower image is my favorite!  I did grab a video of it leaving the Sun, so I'll probably turn that into a sped-up video at some point because it will look cool. 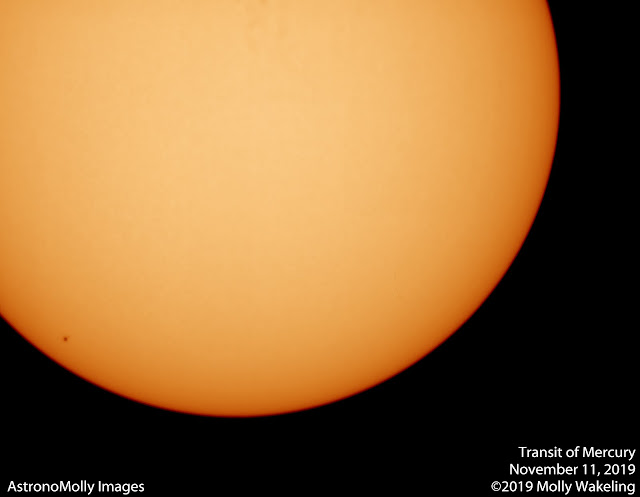 What a neat event with fun people!  I had a great time.  And I didn't even have to miss class since it was Veteran's Day.  I wonder what kind of gear I will have and where I will be for the next one in 2032!

Table of Contents
Posted by AstronoMolly at 3:35 PM