My classmates hosted a Halloween party on Saturday night, so I got set up early so that it could run while I was out trying to have fun.  The Moon was up, so I went ahead and grabbed a video of it in SharpCap for later processing.  Goto for slewing there was way off though, and I had noticed that last night when I went out to re-focus before going to bed.  So I re-did the alignment procedure, and then refocused one more time before I left the house. 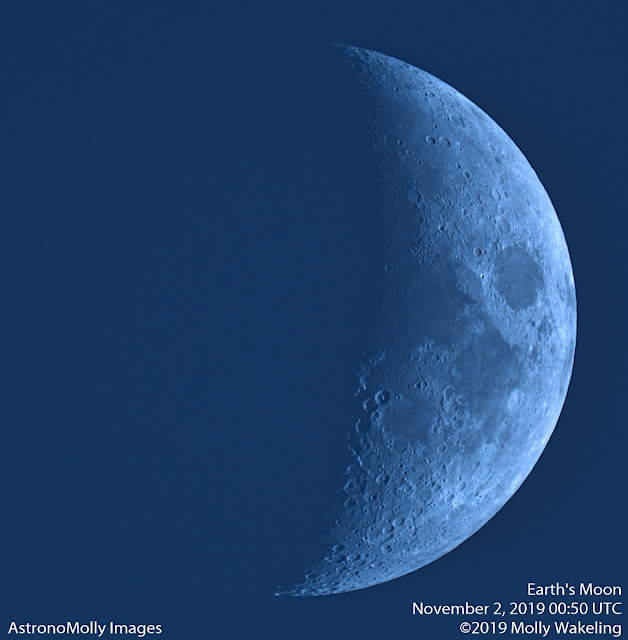 The seeing was quite steady, so this came out nice and sharp!

While I was re-aligning, the declination axis did "the thing" again, where it suddenly starts slewing out of control.  I figured out a little while ago that it was possibly due to the RJ cable running from the mount to the dec motor housing getting tugged on by my cable bundle and coming ever-so-slightly loose from the port, so I ran inside to grab my gaffers tape and tape that sucker down.  Hopefully that will cure that little problem.  I had to re-align again.

After the party, I re-focused again to compensate for the evening drop in temperature.  Besides that, everything seemed to be running smoothly, woo hoo!  I was still awake when it changed targets to M31, the Andromeda Galaxy, so I watched it from my phone using TeamViewer.  The PHD autoguide graph started going bad almost right away -- dec drifted off like crazy and didn't come back.  So I aborted the sequence, nudged the mount using the slew controls in Sequence Generator Pro, and restarted, but it did the same thing again.  So I went outside to investigate what was going on.  It seemed to be in a fine position, not too far over as to make the dec axis slide out (I had to loosen it so it wouldn't freeze up a while back, but now I can't go past the meridian really at all).  So in SGP, I went to the Frame & Focus mode to get continuous images (albeit at a muuuuuuch slower pace than SharpCap, but I didn't feel like disconnecting and reconnecting it in software).  I slewed the mount a little in dec with the hand controller, and it seemed to move just fine, not really any backlash or other issues.  So I re-started the sequence, and PHD was autoguiding just fine after that.  Hmph.

So I went back inside, and checked on it again 10 or 15 minutes later, and it was drifting off again!  Whyyyyyyyy
Nudging the dec axis didn't seem to show any backlash, so I don't think it's that.

Finally, I gave up and disabled M31 in the target list, and added M45, the Pleaides Cluster, in its place, in a much easier part of the sky apparently for this mount.

The next morning, as I went through all the subframes to check them, it wasn't looking good.  I only got one frame of the Flaming Star Nebula, which was the last frame before it shut down for sunrise.  I don't really know why that was the only one that made it.  All of my Heart Nebula images were out of focus, as were my Pacman Nebula images.  On the bright side, I did get a couple of M31 frames, as well as a whole bunch of M42 Orion Nebula frames, which were actually in focus.  I had left the focuser set for the cooler, later-in-the-night temperature.  My M42 images are looking quite nice. 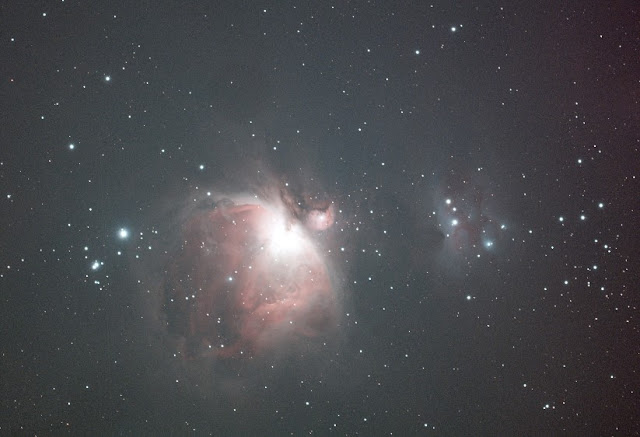 Despite all of these little issues, being able to sleep and leave my gear set up long-term is really, really nice.  It gives me much more time to work out all of the bugs!  Hopefully I can get them ironed out soon.

Table of Contents
Posted by AstronoMolly at 5:26 PM