After bringing home my brand-new mount only the day before, I got another chance with some stars out to give it a test run!  I got my TheSkyX license key and got it installed on my Microsoft Surface 3 tablet.  It runs a little slow on that platform, but it does run.  I opened up the program and got those lovely chimes. 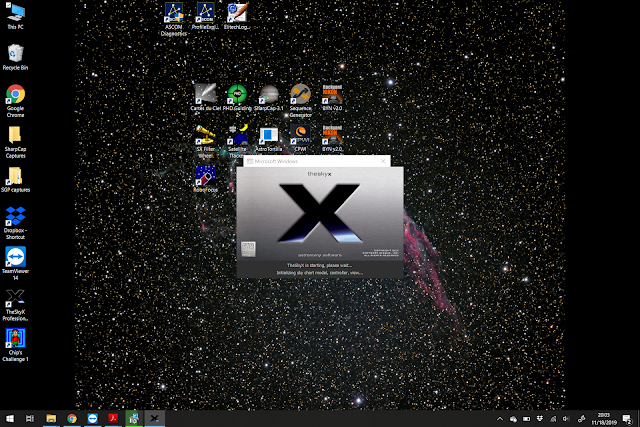 After homing the mount (it goes to a specific pointing position in the southwest, and uses that as the home position for determining where you are pointing the rest of the night) and getting my camera connected to TheSkyX, I ran T-Point, which is its alignment routine.  You give it an area of sky, which you can map out by hand, by feeding it a picture of your horizon, or by just setting an overall horizon limit, such as 30 degrees.  Then it picks out whatever number of stars you tell it to, and uses your camera to align itself to numerous points precisely.  If you feed it a lot of points, it can map out different performance of the gears and other errors across the sky and 'undo' them sort of PEC-style, in a process called ProTrack.

It was hard to map out my horizon well -- I didn't have a panorama of my backyard, and I tried drawing out some of the limits by hand, but that was pretty difficult and not terribly accurate either.  But there is an alternate way to have it automatically select stars for you -- you can slew somewhere, and then say "add six points here," and it will make an L of points around where you're pointing.  So I just did that for a bunch of clear-sky positions.  I had it set up really close to my lemon tree, so I was pretty much limited to one side of the meridian, which it didn't like that much but did anyway.

Man, it was so cool to just watch this thing align itself autonomously!  Like, I live in the future.  Also, it was very quiet, especially compared to my Celestron AVX, which is very loud.  And it moved so smoothly!  What a breath of fresh air.  It was so beautiful just watching it.  It moved a lot faster than my AVX, but not quite as fast as my Celestron CGE Pro.  It was still bookin' though.  (And certainly not as fast as a Planewave direct-drive mount, but hey, no qualms there!)

Next was fine polar alignment.  (I'd roughly aligned it when I set it up using my phone's compass).  This process was very much like Celestron's All-Star Polar Alignment routine, but a little smarter; you pick a star in the south-ish, center it (I used a live camera view in SharpCap for this), then the mount slews to the offset it calculated based on the T-Point model as to where the star should be if you were polar aligned, and then you adjust the mount until the star was centered.  It could also tell you exactly how many ticks to move the azimuth and altitude adjustment knobs, which are marked.  The only issue I had was that the azimuth knobs were very tight and difficult to turn.  I wondered if there were some set bolts I needed to loosen, but I couldn't find any.  So I grabbed my 5/32 hex wrench and used it to help me turn the knobs, which have a hex bolt in the center of them.  The altitude adjustment, which was the major issue with my Celestron CGE Pro (and my CGE), was a breeze -- it was designed in a much smarter way that made it very easy to turn, even fully loaded and pointing south.  Finally, it updates the T-Point model for you instead of having to do a re-alignment like I do with my Celestron mounts.

With that complete, I decided to try out TheSkyX's autoguiding feature.  At first, I couldn't get TSX to talk to my QHY camera driver, but then after some Googling, I figured out that you can just use the generic ASCOM camera driver instead, and that worked.  Then I ran the calibration routine, but I kept getting an error message that it wasn't slewing enough in the X direction.  I looked at the result plot, and it was slewing just fine to north, south, and west, but not east.  I tried exposures as long as 60s, which was ridiculous, but I kept getting the same error.  So I tried calibrating at a different spot in the sky, but still got the same error.  I also power cycled the mount; still the same.  Finally, I gave up, and decided to see how well it could do without guiding. 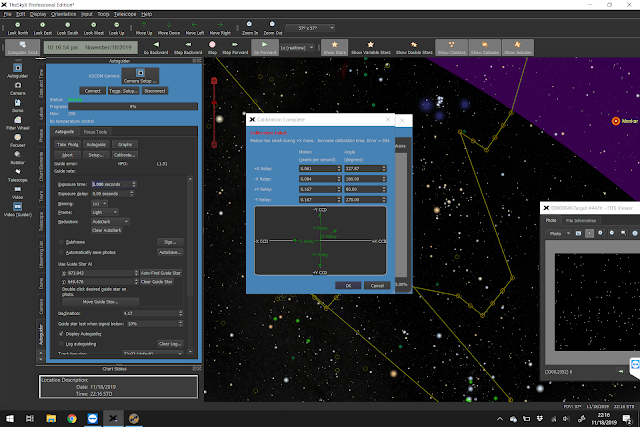 I took some subframes on M45, the Pleaides Cluster, for 3 minutes, and there was some streaking, but not terrible.  I turned on ProTrack, which made it a little better, but still not better enough to not guide.  I dropped to 2 minutes, then 1 minute.

The clouds started to get too thick to continue at this point, so I had to close up for the night.  I decided to do PEC (periodic error correction) training tomorrow.  I also planned on doing some reading of the manual to make sure I didn't miss anything for guiding.