We had an extra quantum mechanics lecture this week to make up for the one we lost when PG&E shut off power in the area to help prevent wildfires, and having three days in a row of that 90-minute lecture was brutal!  So I got home late, but got the scope set up as soon as I could.

I figured out pretty quickly what happened to the declination axis last night -- the cable bundle had gotten wrapped around the mount!  I forgot to re-attach one of the cable clips onto the mount when I borrowed the connection for testing my solar imaging rig yesterday.  I detangled it and re-attached it, re-aligned the scope with 2 alignment stars and 3 calibration stars, and started the sequence.  It's a little out of focus at the moment, but it will be in focus for a greater portion of the night at the point that it's at, since it was colder when I set it.  I still haven't heard back from Technical Innovations on the email I sent them asking about what the problem might be with my focus controller, so it might be time for a phone call.

I processed the luminance data from Brian Sheets of NGC 1055 yesterday, and wow did it come out nicely!  Way more detail than in a single frame.  I love when that happens. 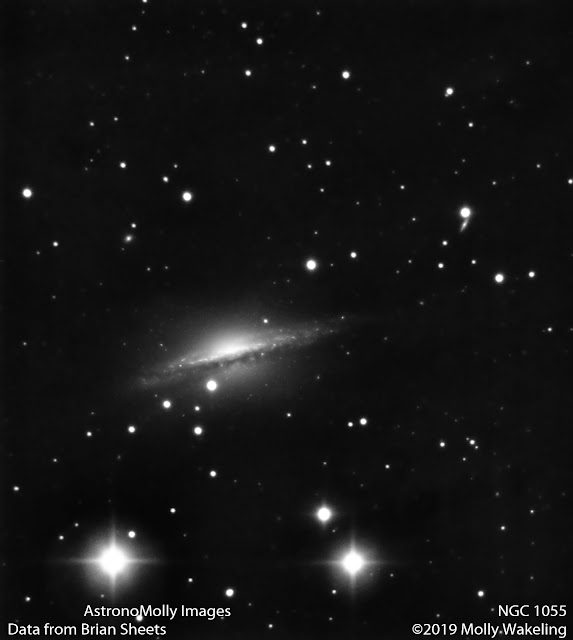 A promising start!  I had to crop the already-small (1024x1024) image quite a bit due to the piling up of tracking errors that ultimately made it wander pretty far through the frame, but it worked out nonetheless.  I did some interpolation in Photoshop to bump up the image size.  I'll re-process it at some point using drizzle processing, which I haven't played with much yet because all of my cameras have rather large pixel arrays (12-24 megapixels).  I was also rather pleased to be able to get some 3D-ness on the galaxy -- you can see it wrap around behind the central bulge a bit.  Yay for contrast enhancement!

When I combed through the frames in the morning, I lost quite a few, as usual -- the Flaming Star Nebula shots all had streaky stars, the Heart and Pacman Nebulae were out of focus because it hadn't gotten cold enough out yet, and M31 lost its guide star several times according to the Sequence Generator Pro error log, as well as failing to settle the guider.  Still not sure what's up with that one.  Oh well...I'll keep trying!

Posted by AstronoMolly at 9:27 PM