Between my trip to Chile and my move to California, I haven't had a lot of time for outreach.  I finally go to do a little at Sunday night's Members-Only Viewing Night of the Eastbay Astronomical Society.  The EAS is based out of the Chabot Science Center, and they have some pretty incredible telescopes on a really nice deck above the main building.  One of them is a 20" Warner & Swasey refractor, through which I got to enjoy some gorgeous views that evening. 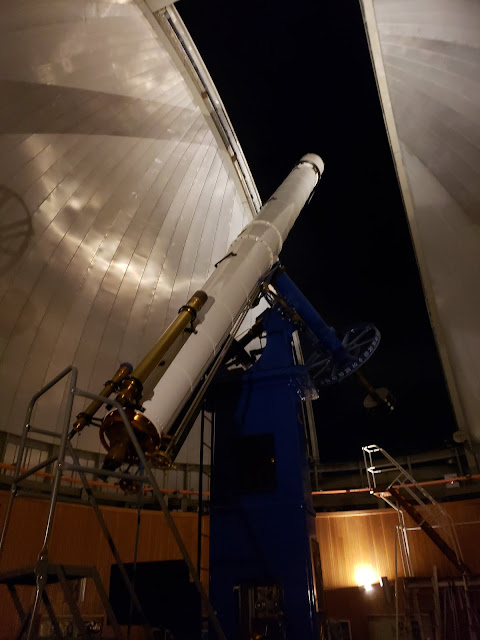 In a roll-off shed to the right of Rachel is "Nellie," a glorious 36" Schmidt-Cassegrain (I think) reflector that is used for NEO (near-Earth object) research. 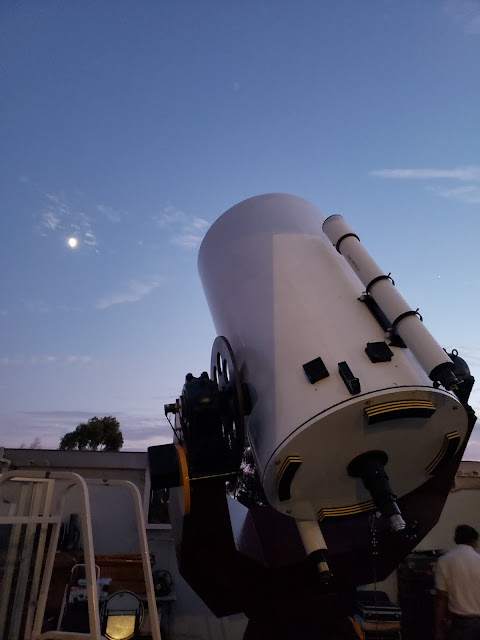 I brought along my humble 8-inch Schmidt-Cassegrain scope on its Celestron NexStar SE mount and got it set up on the patio.  There were a few families present for telescope viewing that night, and I showed off the moon and Saturn to them, which is always a delight, for both the kids and the adults!  Seeing those craters up close is a totally different experience.  And actually seeing Saturn's rings is a surprise to many people!  Despite lots of thin passing clouds, the atmospheric seeing conditions were astounding that night.  Like rock-solid steady.  It was amazing!  I did bring my ZWO color camera and grabbed some video in between the clouds, but I haven't processed it yet (RegiStax has been having trouble with my color videos anyway -- may need to give AutoStakkert a try).

Through the 20-inch refractor, I had the pleasure of enjoying a few targets that evening.  First was M57, the Ring Nebula, which despite the moon, had great contrast against the background!  I couldn't resolve the central star, but it was gorgeous to look at nonetheless.  Next, I got to see dazzling globular cluster M15, which through a 20" aperture boasted hundreds of individually-resolvable stars that glittered in the sky.  Finally, we went over to a type of star that I have not really observed much of before: a carbon star, in particular, T Lyrae.  Carbon stars are interesting because they're in the asymptotic giant branch (near the end of red giant stars' lives), and they've largely run out of hydrogen to fuse and are instead fusing helium through the triple-alpha process, which produces carbon.  Oftentimes, these stars have hydrogen-burning shells, but every 10,000-100,000 years or so, they will develop a helium-burning shell instead, which causes hydrogen fusion to stop for a period of time.  This causes material from the core to rise up (including lots of carbon), and the star's luminosity increases.  The rising-up of carbon makes the star expand, which makes it cool enough that helium can no longer fuse, and hydrogen fusion restarts.  These are known as helium flashes.  After many of these, enough mass has been lost that the former red giant becomes a white dwarf inside a planetary nebula.  The carbon that rises up to the upper part of the star gives these stars a strikingly red appearance.  It was really neat to see in the eyepiece!

The EAS & Chabot volunteers closed up the domes around 9:45 as the clouds grew thicker.  It was a fun evening, and I was sad to go!  Of course, I did need to get to bed for my 9 AM class on Monday morning.

Posted by AstronoMolly at 9:59 AM