Another night of hydrogen-alpha imaging on my monochrome ZWO ASI1600MM Pro.  The subframes come out looking so nice!  Things were running smoothly as the evening began, and I monitored progress from inside on my desktop computer during the post-broadcast chat after the weekly The Astro Imaging Channel broadcast.

The Heart Nebula went behind my plum tree a little earlier than I expected, so I moved up the M31 start time, but the mount thought that it was outside my restrictive -5-degree slew limit.  I double-checked the RA limits because it should have been fine -- maybe it needs to be +5 degrees to say how far it's allowed past the meridian?  I changed the M31 start time to be about five degrees on the other side of the meridian to give me some padding, but then I needed another target to fill the gap.  I decided to try the California Nebula, which is much to big to fit even in my relatively wide field-of-view, but I've seen some images of it recently that are just of part of it, and they look really cool.

While slewing around, I think I might have heard the dec axis slipping a few times, which oftentimes the AVX is good at "catching up" and still maintaining its alignment.  But I slewed to Algol to check, and while it was in the frame, it wasn't quite centered.  Then the mount had trouble centering the California Nebula, and PlateSolve2 was doing a spiral search to figure out where it was pointed.  Gosh dangit, I needed to go to bed!  I didn't want to go outside, so I thought maybe I could do the alignment from inside using the NexStar hand controller GUI.  Unfortunately, it needed info I didn't have handy, like the version number of the motor control and hand control firmware.  So I wound up just going outside and doing the alignment.  (I could use the PWI software, but there are advantages to letting the mount save the alignment rather than my computer, and I haven't used it in a while).

I had the mount slew to the home position to see if the alignment was actually off, and sure enough, the index mark on the dec axis did not line back up.  So I power-cycled the mount and re-did the whole alignment.  The RA axis had some crazy backlash pointing far south!  I need to get inside the mount and check on things.  It might be the cause of my M42 bad-tracking problems.

Back inside, it was time for M31, so I watched it slew and center and start imaging, but the dec axis hung up again and went off the rails on PHD.  I nudged the mount in Sequence Generator Pro, and then re-centered M31, but that only worked for one frame in the end.  I finally went to bed at 12:30 AM. 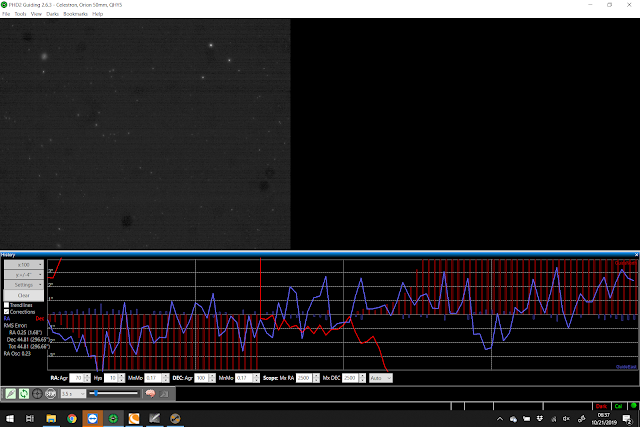 When I went outside in the morning around 6:30 AM, the sky was gorgeous!  Lots of glittering stars, the Orion constellation nice and high in the southwest, and a half-moon floating near the meridian.  Before I covered the scope, I decided to grab a video of the moon.  The camera was still warming since the run had completed not long before I got up.  Between that and Orion's morning position, it means winter is coming!! 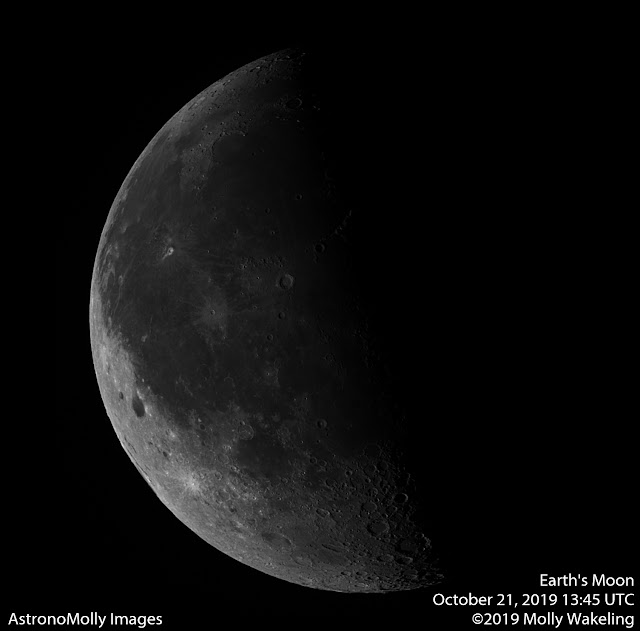 Table of Contents
Posted by AstronoMolly at 9:42 PM