I got out of church late after chatting with some people, so I skipped the TAIC talk and made dinner (sorry guys!).  Then I played some Borderlands 3 with some of my classmates from school.  But before I started playing, I got the scope set up around 7:15 PM, just about as soon as it was dark.  The atmospheric transparency was forecast to be not great until about 1 AM, and there is still some lingering smoke in the air, but I figured I may as well try, and I can just toss bad exposures later.  Especially since it's so little effort to acquire the images now that I've put all this work into the setup!

The Flaming Star Nebula and M31 Andromeda Galaxy still had tracking issues on the Celestron AVX mount.  I've given M31 plenty of time to get past the meridian before I start imaging to avoid any badness that might be occurring up that high, but it doesn't seem to be helping!

My early morning shots on M42 Orion Nebula were out of focus, thanks to temperature changes.  The Rosette Nebula was too.  I emailed Technical Innovations again yesterday about my Robofocus; hopefully this time I will hear back.


A new project I've got going is a collaboration with Brian Sheets, an amateur astronomer out in Utah.  He primarily does scientific imaging -- mainly NEO-hunting (near-Earth objects).  He contacted me back in August to ask if I would be interested in doing some 'pretty-picture' astrophotography on his rig -- he was curious to see what it was capable of producing.  I, of course, agreed!  I was working on my move out to California at the time, so I didn't get started on it till this month, but I finally put in a target, and finally got some frames on it last night!

He has a Celestron C14 with a SBIG STL-1001e on a Paramount MX+.  His location in Utah is not particularly dark.  However, I was excited about using his rig primarily for the small FOV -- the native focal length of the C14 is 3910mm, and that camera is only 1024x1024 pixels.  Also, that camera has 24-micron pixels, which is enormous!!  For comparison, my ZWO cameras have 3.8 and 4.6-micron pixels.  Now, you might think, "Why would you want big pixels? Won't that decrease your spatial resolution?"  That is a true statement.  However, a bigger pixel collects more light due to its larger surface area, and it is thus a very sensitive camera.  It's a good thing too, since he doesn't have an autoguider set up on that rig yet, so I'm limited to 2-minute exposures (which is honestly pretty good for such a long focal length and heavy scope!).

I was excited about the small FOV because I have largely been unable to image tiny targets, like most galaxies and planetary nebulae, for the last two years, since my Celestron CGE and CGE Pro mounts have been basically non-functional.  I haven't been able to use my C11 in ages, and when I have tried my C8 on my Celestron AVX mount, I have to use my focal reducer (which drops the focal length to 1280mm), and I can only take like 30s images.  While I looooove shooting nebulae through refractors, I miss imaging galaxies!  So the first target I put in was NGC 1055, a galaxy in the constellation of Cetus that lies about 63 million lightyears away.  It's not quite edge-on, but it's relatively close, so you can see some awesome dust lanes, as well as the bright bulge of the core rising up out of the plane.  Tonight is the first night I've got images coming down -- very exciting! 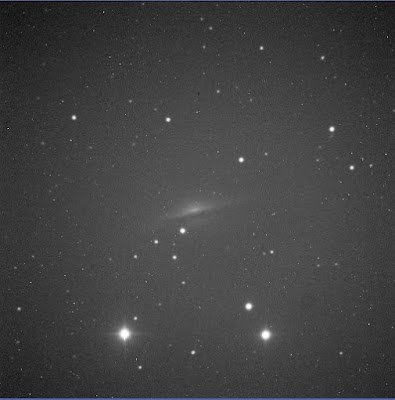 On Saturday, I finally worked on a project I've been meaning to do for a long time -- a solar filter for my C8!  Just in time for the upcoming Mercury transit.  I looked up some ideas online, and combined a few together.  I ultimately decided to follow some advice I saw several places, which was for telescopes with apertures 8 inches or bigger, an off-axis cell is the best way to go.  You do lose a little resolution that way, but at that size it gets difficult to disperse the heat, especially since the Seymour Solar filter paper I have is absorptive rather than reflective.

I laid out a couple of Blue Apron cardboard boxes I had been holding onto and cut out a long strip, which I wrapped around my Celestron 8-inch SCT's exterior tube at the objective.  I cut it to size, and then cut two more.  I forgot to add the extra length of going around the inner strips of cardboard, however, so they came up a little short.  Some duct tape took care of that.  I used a box cutter to cut a square into the ring so there would be a spot for the dovetail.  After wrapping the entire circle in duct tape and black gaffers tape, I set it aside, and cut out two flat circles larger than the diameter of my scope's objective by about 4 cm.  I used my dew shield to get the size of the outermost metal ring, since it's larger than just the scope's 8-inch aperture.  Next, I used a compass to make a circle for the solar filter, which I cut with a box cutter out on my front porch.  I lined the inner circle with black gaffers tape to smooth it out.  Then, using double-sided tape, I taped the filter onto one of the cardboard circles, and taped the other one to it.  Finally, I used wood glue to attach the circular strips to the front circle with the filter.  (Sorry I didn't take more pictures!)  I used some textbooks and a telescope counterweight to press the pieces together, and let it set overnight.  I used some spare cardboard pieces to protect the filter paper. 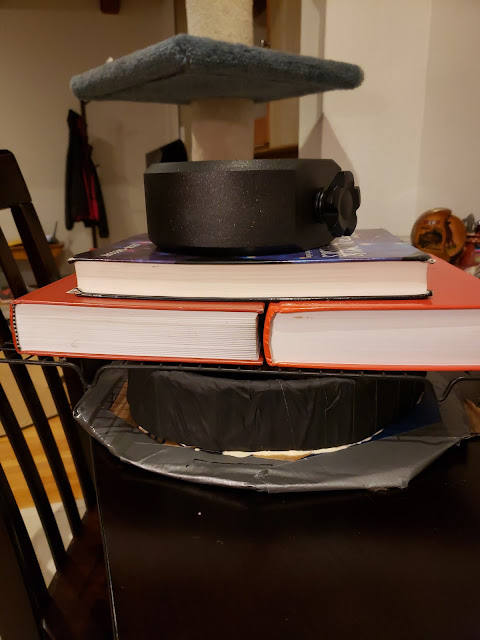 Once the glue dried, I covered the rest of the exterior with black gaffers tape.  Then I cut out some cardboard pieces and put Velcro on them to protect the filter paper on both the inside and the outside. 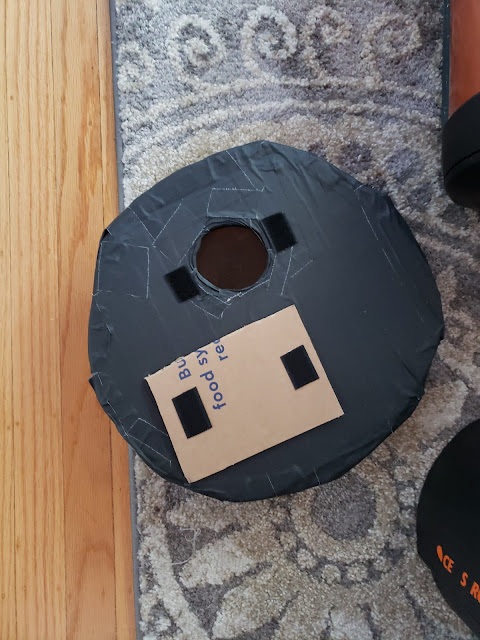 It was too smoky to go test it today, but hopefully I can squeeze it in tomorrow.

Table of Contents
Posted by AstronoMolly at 3:20 PM