Yesterday, I was home in the afternoon, and after struggling with trying to do homework for a while, I decided to go ahead and test my solar imaging rig for the fast-approaching Mercury transit.

I brought my 8-inch Celestron Schmidt-Cassegrain outside on my Celestron NexStar SE alt-az mount and set it up near the back fence in my backyard to catch the sun before it got too far west. 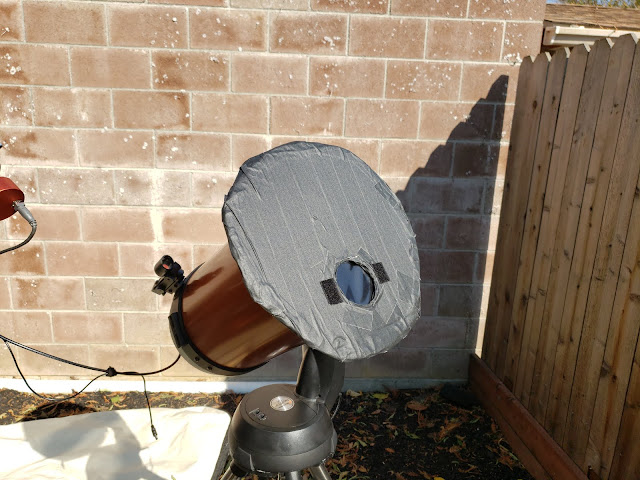 And here's a test shot: 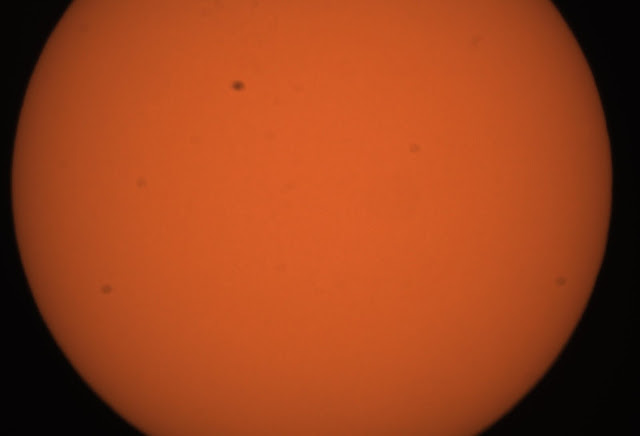 Those aren't sunspots, but bits of dust on the camera or thereabouts.  One nice thing about the Seymour Solar filters is they give you a nice "sun-like" orange color, rather than pink or blue or green or other colors I've seen.  I checked my NASA Space Weather app: nope, no sunspots today.  :(

The front did get quite hot, so I think I'll buy some white gaffers tape and put that on the front instead.

The smoke picked up again last night, so I decided not to image.  But tonight is looking clearer, so I decided to go ahead and see how my images might come out.

I set up, and checked focus on star Alpheratz -- perfect!  Which was crazy, since I took the camera off to image the sun on Sunday, and it's pretty tough to get it back in exactly the same spot. 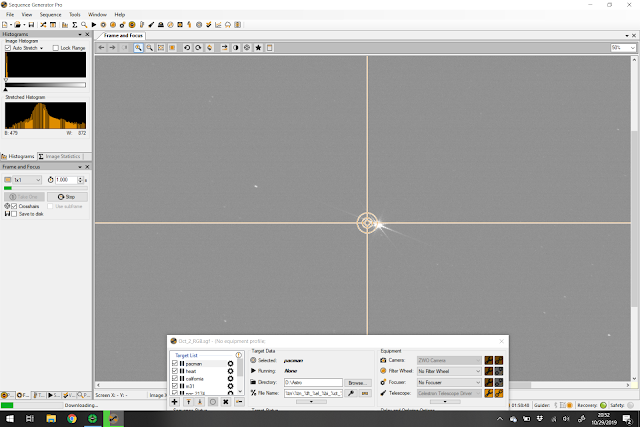 Along with the camera, I've also now got the correct light pollution filter on!  I had previously been imaging with the Astronomik CLS, which is fine for DSLRs, but doesn't block UV/IR light.  Neither of my ZWO cameras have built-in UV/IR filters (and good thing too -- it opens up more possibilities of imaging, like with an IR-pass filter, which is helpful for planets).  So I sold the CLS filter to help fund the new one -- the Astronomik CLS-CCD filter, which also blocks UV/IR.  Not blocking it was causing problems with my refractor because only optical light is corrected and focused onto the same spot -- IR light can show up as a defocused halo around the star, which is exactly what was happening in images like my recent Eastern Veil Nebula.  This should fix that problem!

I went ahead and left the C8 set up outside on its alt-az mount because I'm hoping to image Uranus here soon on a night with good seeing.  I've tried before, but haven't gotten much, back when I was using my DSLR.  I'm ready for another attempt now, and it's shortly past opposition!  But I need a night of good seeing, and last night was forecast to be only "below average."

I went to bed, and in the morning, peeked out my window to check that the mount had parked itself.  It had not :( It was pointing at my neighbor's garage.  When I got out there, PlateSolve2 was still doing a spiral search on M31!  My guess was that dec had slipped or jumped again for some reason, since pointing at the wall was where it had parked itself, thinking it was the home position.  The mount got lost.  Guess I'll re-align next night!

Table of Contents
Posted by AstronoMolly at 3:23 PM