Sometime during the previous night, the dec axis had some kind of issue and ended up losing alignment, which I knew because it wasn't in the home position in the morning, but several degrees off in dec.  Likely, the cable going to the motor housing (why is this not done internally??) got tugged on or something, which makes the mount slew without that motion being encoded, and at a high speed.  After shoving it back into the port, I rebooted the mount to clear the alignment, and then slewed to Vega as the first alignment star.  During the slew, I saw that the RA axis had some serious delay!  It took a few seconds for it to start spinning after I hit the controller button when I tried to move it.  So I popped open the RA casing to see what was going on.  I slewed the mount, and saw that the motor shaft was turning, but the gear wasn't!  Luckily, this was easy to fix -- the set screws holding the gear to the shaft had worked their way loose somehow.  I tightened them with a tiny hex key, and everything was back to normal. 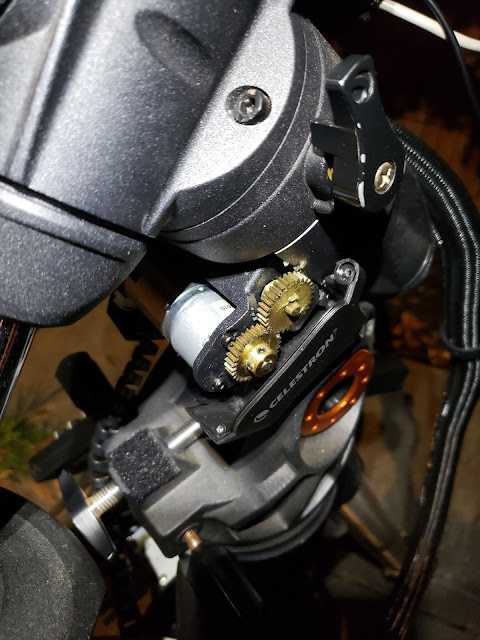 Looking down at the open RA motor housing.  The motor drive gear is the left one; the little gray circles on it are the set screws.

After this 5-minute pause, I was back to alignment.  I re-aligned, and also re-calibrated the autoguiding software PHD2, since I forgot to do that last week when I re-polar-aligned it.  By 8:45 PM, I was off and imaging!  Time to go hang out inside, have some wine, pet my cats, and watch some TV.

In the morning, I looked out a back window as I usually do to check that it had indeed returned to the home position -- and it had not!  It was pointing down at the ground! 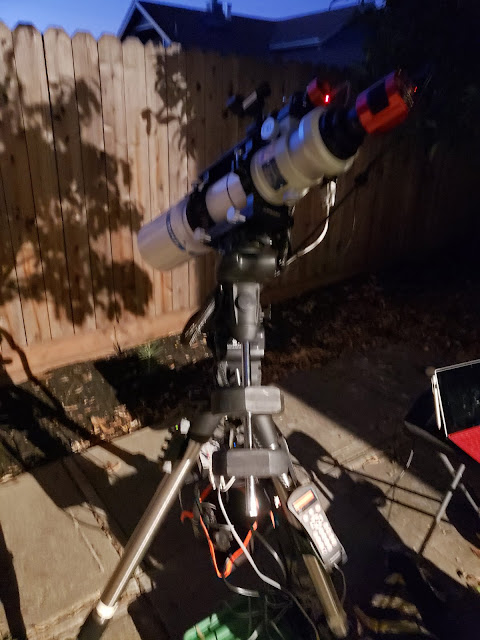 I was a little perplexed at how this could happen.  However, it didn't take me long to figure it out -- the clutch had some loose.  Over time, tightening the clutch advanced the position of the knob, and when the mount rotated, it was dragged across the dec motor housing, which loosened it back up. 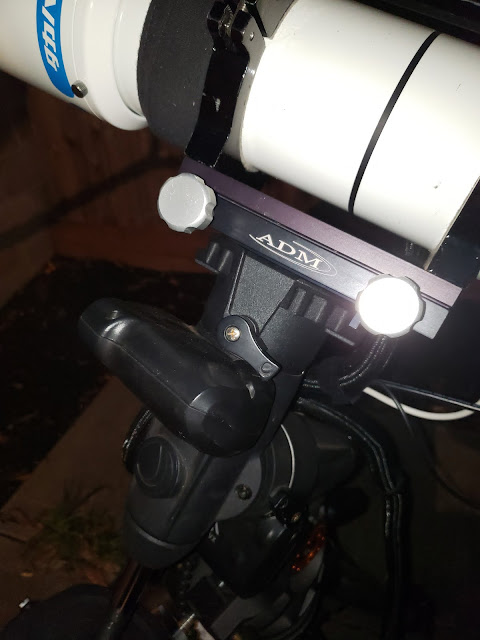 Luckily, this was also easy to fix: you simply take out the Philips-head screw that holds the knob to the bolt, rotate it upward, and screw it back in.  Done!

I looked through my data, and unfortunately it had only gotten through the Heart Nebula before it slipped.  Dang.  Oh well...

Table of Contents
Posted by AstronoMolly at 4:39 PM