Tuesday morning, I peaked out my back door to check that my scope was in the home position as soon as I got out of bed, as has become part of my morning routine.  However, rather than being in the home position, it decided it wanted to check out the southern hemisphere! 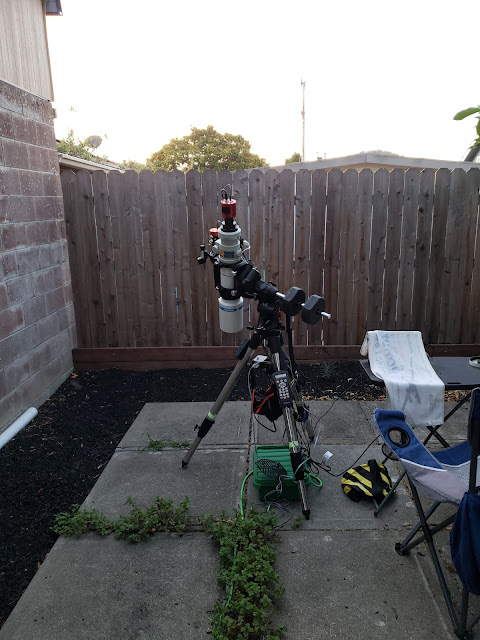 It wasn't slewing, which was good (I hoped).  I looked at Sequence Generator Pro, and it was showing complaints of being unable to find guide stars around 7 AM...but it should have stopped at 5:30!  Why didn't it stop?

I told the mount to go to the home position, and while RA went to its normal spot, dec, didn't. 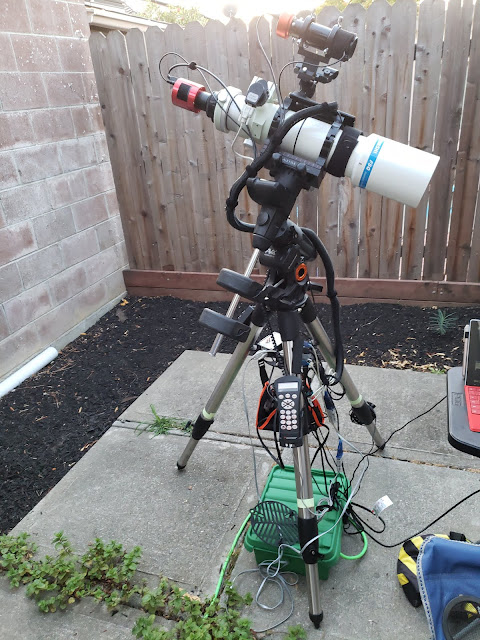 Upon further investigation of Sequence Generator Pro (once I brought it back inside where it was warmer!), I saw that while I had set a sequence end time for my new hydrogen-alpha sequence, I forgot to actually tick the box to enable it!  I also saw that I had Orion Nebula images, which was my last target of the night.  So putting the pieces together, here's what I think happened: It was tracking M42 (Orion Nebula), and when it crossed the meridian at 6 AM, the dec axis must have done its whacko thing of zipping back and forth very quickly.  It must have stopped doing that at some point, since it wasn't still doing it when I woke up.  When that happens, those movements aren't tracked by the encoder, so it loses its position, which would explain why the dec axis didn't actually go to the correct home position.

I got some hilarious comments on Instagram:
- "This post gives me anxiety!"
- "Clearly this is just your unannounced neutrino detector continuing to track the target"
- "It misses Atacama and is trying to polar align itself?"
- "Still trying for the southern hemisphere targets I see"
And Facebook:
- "Your scope found a new star"
- "Cosmic Ray Mode?"

Fortunately, nothing appears to have been harmed!  I decided to turn off meridian flipping until I further diagnose the dec axis issue.  If something breaks and the scope keeps tracking a target to the meridian, then it will just stop at the RA limit I set on the hand controller of 5 degrees past the meridian and stay there.  That's a fine state to end up in, and should prevent things from breaking.

And, and, and, the images are legit!! 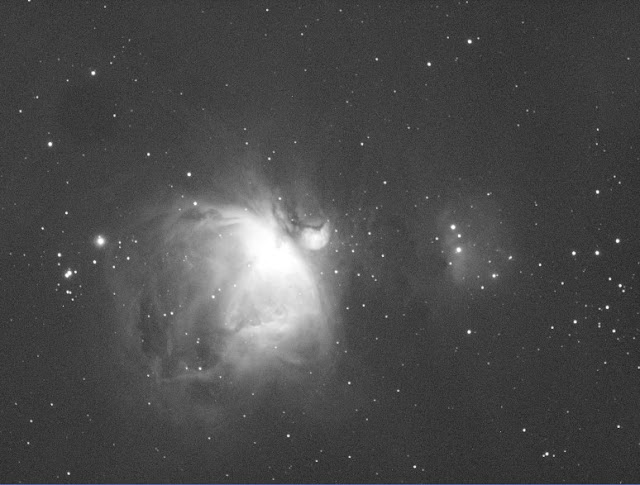 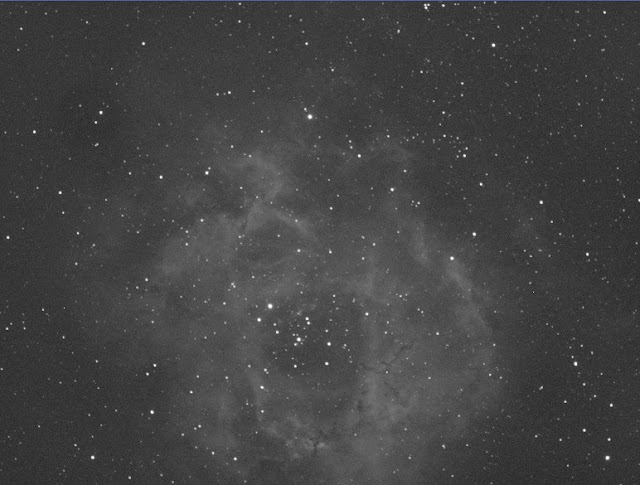 5-minute single frame on the Rosette Nebula.  Didn't quite have the correct coordinates...

The ones in the second half of the night were just a hair out of focus...really need to get my stupid Robofocuser to work.

The Rosette Nebula ended up not quite in the center of the frame.  It's a tough one to get centered coordinates for because the nebula itself doesn't really have a catalog number, just the various star clusters and sections of the nebula discovered by various people like Herschel.  To remedy this, I went into Cartes du Ciel, picked a star that was close to the middle of the "donut hole" of the center of the nebula, and used the coordinates for that to feed into SGP.

After attempting to get some homework done (and failing to concentrate, I finally just made some lunch, and then headed onto campus for quantum mechanics discussion session, and then more group homework time in the "panic room," aka the graduate student lounge.

After I got home from my late-evening quantum mechanics class, I set up my scope after re-checking the forecast.  Since the dec axis got lost, I was curious to see how close it would be if I just lined the index markings back up and re-loaded the previous alignment model.  I slewed to a star in the east, and it wasn't too bad!  The star was at least in my camera's FOV.  I did re-add that and another alignment star just to firm things up a bit so that the centering process wouldn't take too long.

I tried again to get my Robofocus to work, and it did work using the manual buttons!  I noticed through that they were backwards -- the out button pulled the drawtube in, and the in button pushed it out.  The manual says you can have it reverse by turning it off, and then back on while holding the "out" button.  I did this, but then it went back to the not-working mode, where I push one of the manual direction buttons, it doesn't move, and then emits a long and loud beep.  Sigh.  This stupid thing will never work.  I Googled some solutions earlier in the day, but nobody else in the world seems to have ever had this problem, or at least they haven't posted about it online anywhere.  I've disconnected and reconnected power, the serial cable going to the motor, and the computer cable, but to no avail.  Finally, I gave up and just focused manually.

My tablet wifi card quit working again even after re-booting, so I couldn't check on progress using TeamViewer.  Oh well.  I went out and checked on it again one more time before bed, and everything looked good.

The sequence ended as it was supposed to, and parked the scope.  Woot!  And my Rosette Nebula was properly centered this time with the different set of coordinates. 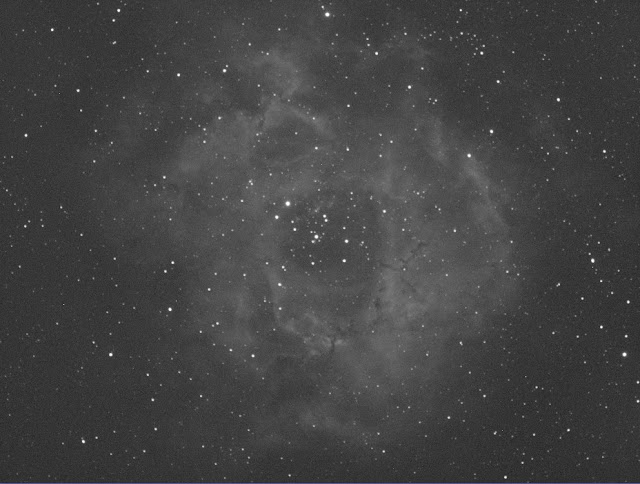 Super cannot wait to stack these!!!

Posted by AstronoMolly at 10:15 PM