I was scrolling through Facebook when I came across a gorgeous image of comet C/2018 W2 (Africano) in the ZWO user's group.  I went and checked its current location and brightness in SkySafari, and it was in the southeastern sky in the first half of the evening, shining at magnitude +10!  Within reach from my backyard.  Of course, I currently had my ZWO ASI1600MM Pro monochrome camera attached to my scope with a hydrogen-alpha filter, which wouldn't do for a comet.  So I opened up my October color camera sequence in Sequence Generator Pro and modified it to add the comet, as well as populate the transit times, when I would need to move to the next target.

When I was adding the comet to the sequence, I obviously needed a set of coordinates that would have the comet near them for the whole two-ish hours I was going to image it.  The comet's coordinates would continually change as it moved across the sky, and I don't think SGP does comet tracking.  So again I went into SkySafari and found the comet, selected a nearby star to center on, and watched how it moved across the sky during the time I was going to image it.  Then I selected a star to center on that would have the comet in a reasonable part of the frame for the whole time, and used the coordinates of that star to feed into SGP to slew to and center on.

It wouldn't be high enough to image until about 9:15 PM, I went outside around 8:45 to get set up.  I swapped out my 1600 for my 294 with the filter wheel and the L filter loaded inside.  Then I fired everything up and slewed to star Enif for focusing.  However, the declination axis did the jumpy thing!  It's the first time I've seen it do that facing east and not west.  So I rebooted, loaded last alignment, and snugged the dec cables deeper into their ports, which I was beginning to suspect was the cause of the problem.  I slewed to Enif again, but  I didn't see it in the FOV in SGP, so I looked at the finderscope, and it was way off!  I will note, however, that I could see some other stars that looked very much in focus.  So fun fact -- my filter wheel is the same width as my 21mm spacer + h-alpha filter!  That makes life a little easier for camera-swapping!

So I needed to re-align, and started that process.  However, when I slewed to Alpheratz as the first star, it wasn't in the FOV when I put the red dot finder on it.  I wondered if it had been jostled or something from my scope cover.  I looked at the mounting bracket, and yup, it had been turned a bit, and the bolt was a little loose.  So I rotated back to center and tightened the bolt.  I needed to re-align the finderscope though because no way was I going to be able to eyeball it exactly as I had it before, so I slewed over to a tree to line it up.  Unfortunately, I wasn't able to focus on the tree after all, but the moon was still just ahead of my lemon tree, so I slewed over there and used it to adjust the finderscope.  Finally, I re-started the alignment process!

At last, I started getting comet images at about 9:50 PM.  If I adjusted the auto-stretch in SGP a bit, I could just see the nucleus! 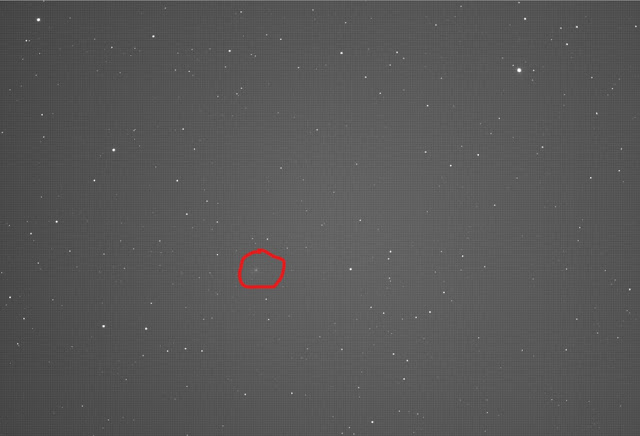 All of the early-morning images were out of focus from temperature changes.  I posted on Cloudy Nights today about getting advice on what's wrong with my Robofocus -- no responses yet, but hopefully someone out there has an answer!  The light pollution was pretty rough.  We'll see how the comet image turns out!

I finished processing this image on Monday the 7th, but haven't had time to write it up yet.

I first attempted to do a still-comet, still-stars double-stack, a la this PixInsight tutorial, but despite my efforts, the comet was too close to the noise in intensity to not have the subtracted-out streaked stars still appear. 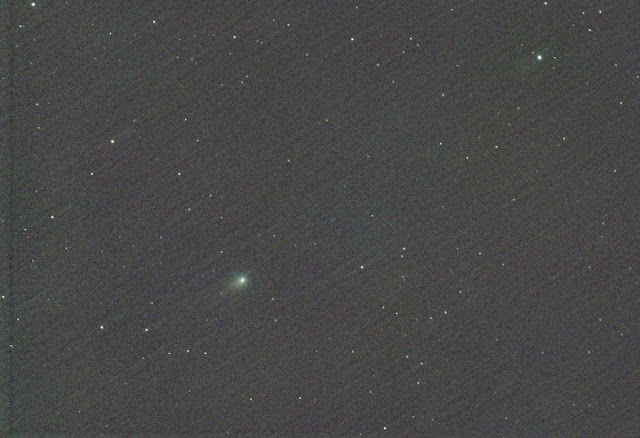 So instead, I decided just to do a still-comet, moving-stars image, which is cool in its own right because it shows in a neat way how much the comet moves against the background of stars. 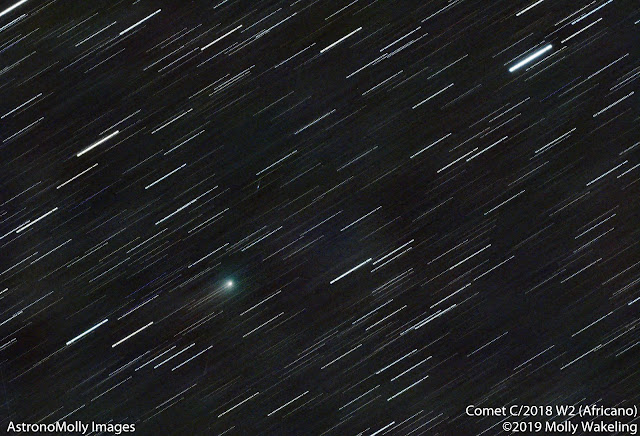 Previously, I used DeepSkyStacker's comet stacking tool to process my last comet image, although I did use PixInsight to make the video.  This time I processed in PixInsight alone.  In DSS, you have to select the comet nucleus in every frame.  In PI, you only have to select it in the first and last frames, and it figures it out from there!

After calibrating the frames with the master bias (no darks because the amp glow is reallllly bad in them), scoring with SubframeSelector, and debayering the color frames to actually have color, I aligned the frames on the comet using the CometAlignment process.  Then I stacked those frames with no pixel rejection in ImageIntegration, since it would have largely rejected the stars (which is more or less what you do to get rid of the stars for the "starless" comet image if you're going for a steady-stars, steady-comet composite image).  Luckily, I only had one satellite pass, and it was a slow-tumbling rocket body that was quite dim.  In addition, my CMOS cameras have pretty much no hot pixels, or at least not any that you really notice.

After that, I applied DynamicBackgroundExtraction three times back-to-back, since the background gradient was all crazy because of aligning on the comet instead of the stars.  I stretched the image, tweaked with CurvesTransformation, and voila!  Comet epicness.  Since I only did 2-minute frames to avoid having the comet moving noticeably during a frame, I didn't get much of the tail, but you can tell it's a comet nonetheless!  And I did get some of that awesome blue-green color.

Letting the stars streak gives it a really cool effect that makes it feel like the comet is flying through space.  Well, it is!  It was moving about 34 km/s relative to the sun on the night I imaged it!

Table of Contents
Posted by AstronoMolly at 11:35 PM