Yet another clear night in the East Bay...I was worried before I moved here about how often it would be foggy, but the fog pretty much stays over San Francisco, and doesn't often make it over to the Berkeley area, at least this time of year.  We'll see how the winter goes.  But for now, the forecast is showing tons of clear skies, and I'm filling up my hard drives!

The Robofocus is a bit of a mystery.  It worked just fine when my uncle had it, but I couldn't get it to talk to my computer at the Texas Star Party (although the manual buttons worked there).  Now, (sometimes) I can hear and feel it engaging the magnetic brake, but the buttons won't actually turn it -- the LED light is on, but about 5-10 seconds after either a short or long button push, it emits a loud, steady tone for 10-20 seconds.  There is nothing in the manual that mentions this behavior (I've read it twice), and nobody online, at least that I've found, has mentioned it either.  Might be time for an email to Technical Innovations.  Even the few times that the buttons have turned the focuser, it still won't talk to the computer (and I've triple-checked the COM port number, and have plugged it in by itself too).  I've even re-installed the software.  *sigh*

The reason I bring this up is because I had to toss out a lot of images from last night for being out of focus, at both the beginning and end of the night.  The ones in the middle were okay, although not perfect.  Except for several of the M77 ones, which were rockin'!  I was able to resolve some detail!  That detail will get more clear once I stack and beat down the noise. Something happened this morning though that I can't quite piece together.  The Rosette Nebula only got an image about every 25 minutes, as did the Orion Nebula, and PHD was going crazy before the sequence ended. 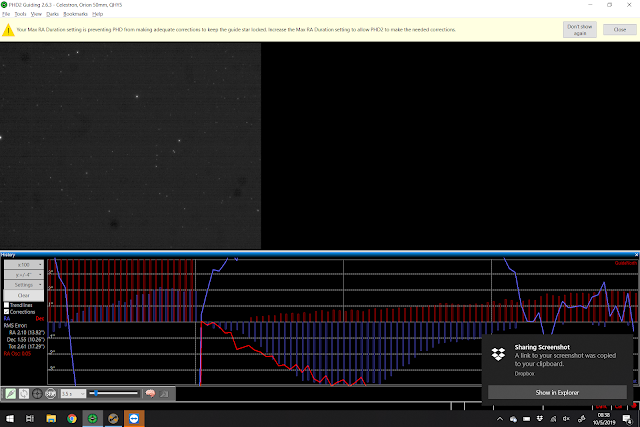 SequenceGenerator Pro was showing some errors in settling the auto-guider, so I figured maybe there were clouds.  The couple images I did get didn't show evidence of clouds, however.  Although, I suppose that maybe if they were patchy clouds, it caught those images in the clear moments.  But then the auto-guiding would have to fail in-between frames only, which is unlikely, since I don't have SGP set to abort or delete a frame if the autoguider fails, it just won't start the next one if it does, and I would have seen clouds in those.  Weird.  Also, to add to the mystery, the mount was showing a "Slew Limit Warn" message on the screen.  I currently have the slew limit set to 5 degrees past the meridian in RA.  M42 didn't cross the meridian until 10 minutes after my sequence ended though, so that wouldn't make sense.  I'll have to go through and double-check the timing logic on everything. 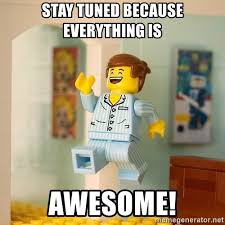 Table of Contents
Posted by AstronoMolly at 5:56 PM