I'm combining these two nights because the same thing happened during both of them: everything was great!  Even though my Robofocus still isn't working, I've found a focus point that at least at current temperature swings has me very close to focus all night long, which just slight shifts on either side.  Over those two nights, I collected:

All are 5-minute hydrogen-alpha filter images on my ZWO ASI1600MM Pro on my Takahashi FSQ-106N with my Celestron AVX mount.  Except for M42, which is a repeating series of 15s, 60s, and 5-minute images so that I can properly expose the wide range of brightnesses, from the very bright core to the dim outer reaches.

You might ask yourself, "Why take H-alpha images of galaxies? I thought only nebulae had much H-alpha."  While this is largely true, there are quite a few galaxies that are undergoing furious rates of star-forming activity, known as starburst galaxies.  These subsequently have a lot of dense regions of H-alpha.  Other galaxies, like M77, have large nebulous and dusty regions without necessarily being starburst galaxies.  M33 is very close to us, and we can see several of its normal nebulae.  I wonder if sky-watchers in M33 enjoy large beautiful nebulae in our galaxy?

M77 is very interesting in radio light too, being a very strong radio emitter known as a Seyfert galaxy.  The radio source, discovered in 1952 and designated Cetus A, turned out to be a point-like source after investigation in optical wavelengths by the Hubble Space Telescope and the Keck 10-meter telescope, only about 12 lightyears across.  Since then, it has been determined that the source is a supermassive black hole at M77's core, weighing in at 10 million times the mass of the sun.  Surrounding the core are dense regions of star-forming activity, which I'm hoping to capture nicely in H-alpha. 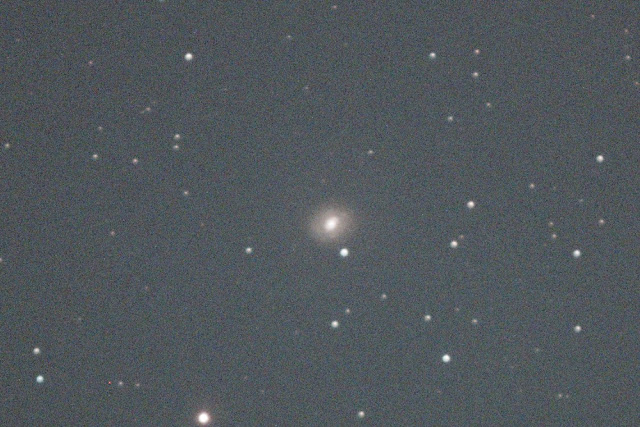 It's a little small to image properly using my Takahashi, but it has a rather extended disk, and there's a few other galaxies in the area, so we'll see how it turns out!  It will be in a good area of the sky to image through mid-December, however, so I'm probably going to collect a fair bit more data before I process it.  I already have 91 color images and 79 H-alpha images, but when you're trying peer through thick light pollution, the more the merrier!  Plus then I can do a more severe cut on image quality and star FWHM (so I can gate out the ones that were a little more out-of-focus) and pick the best subframes from among many.

Posted by AstronoMolly at 5:31 PM