It was cloudy on Thursday night, but I'm back out on this lovely Friday night!  There is some smoke in the air from the fires that started during a particularly dry and windy couple of days that prompted PG&E to shut off power to hundreds of thousands of customers throughout the region.  Luckily, my house was not one of them (although I have everything I need to run my telescope off battery power!), but classes were cancelled at UC Berkeley (where I'm working on my PhD) on Wednesday, Thursday, and Friday due to having the power shut off.  The light pollution likely dropped a fair bit (although the majority of the downtown area of San Francisco was not shut off), but I couldn't tell because the moon was high and bright.  I've got my monochrome ZWO ASI1600MM Pro attached with a hydrogen alpha filter, and while the moon does reflect the sun's hydrogen-alpha-wavelength light, the filter is narrow enough that you can largely continue to image with narrowband filters during the bright moon phases.

I spent Friday afternoon working on quantum mechanics homework at a cafe near campus, and then late afternoon/early evening on a "hike" (really a steep road climb...but fun nonetheless!) with some of my classmates.  After the hike was a trip to the bar, of course.  I didn't get started imaging until about 10 PM.

I set everything up and let it roll (after adjusting the sequence earlier in the day), and I checked back in from my desktop using TeamViewer before I went to bed, and things were looking great!  The atmosphere and my mount were both cooperating to give me 1-arcsecond-RMS guiding, which was really exciting. 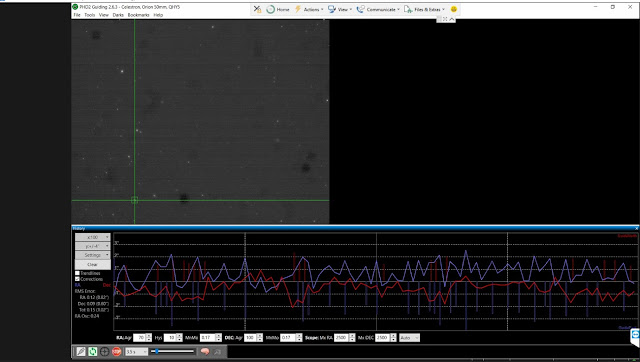 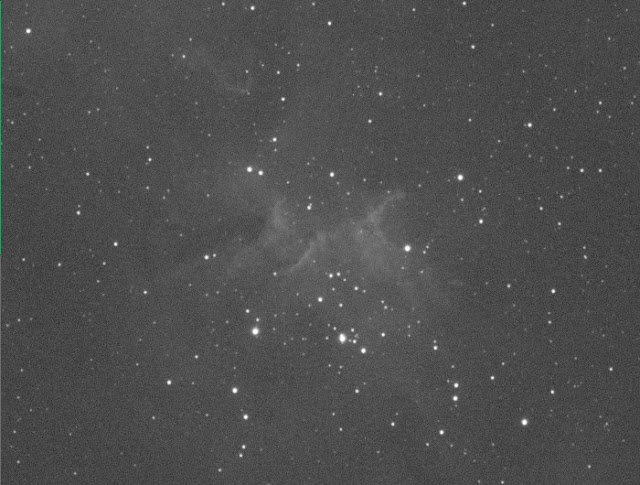 Zoom-in view of the heart of the Heart Nebula, 5-minute exposure, H-alpha filter

That is going to look awesome after I stack it.

Also before I went to bed, I drank some absolutely delicious loose-leaf Earl Gray tea steeped in a Mercury module-shaped infuser that my astro-buddy John M very kindly sent me.  I started processing all the images of M77 I've gotten over the last month as well.

After going to bed and reading for a bit, I checked in on the mount since I heard it slewing to the Andromeda Galaxy.  The plate solve process in Sequence Generator Pro was showing offsets of something like 8,000 pixels, so I figured that the mount was trying to go past the slew limit.  But why?  I had the slew limit set to 5 degrees past meridian, and M31 wasn't super close to crossing yet, and I had the meridian option on the hand controller set to "favor east."  Not wanting to get up and go outside, I just set the start time to 12:45 AM instead, after it had transitted, and slewed the mount to a star that it could sit on for a while until M31 was ready.  I did the re-slewing (and checking where the scope thought it was) using Cartes du Ciel, from my cell phone, using the TeamViewer remote desktop app.  So cool!!  All from the warmth of my bed :D

I had a dream that night that it rained, and the dec axis did the crazy-slew thing, and it defocused, and I couldn't get outside fast enough to protect it from the rain, and I forgot to put the Takahashi back on and still had the C8 on there from imaging the ISS so all of my larger targets were going to be too zoomed-in-on, all kinds of stuff!  But when I looked outside in the morning, everything was fine, of course.  It bumped into the slew limit again while imaging M42, which I also don't understand because it doesn't transit until 5:22 AM and I start imaging it at 5 AM.  I need to dig a little deeper into SGP settings to see if I can do something about which side of the meridian it chooses.  It seems to override the "favor east" setting on my mount.

Posted by AstronoMolly at 10:58 AM