After ordering pizza for dinner (what, I'm tired already!), I went out around 8 PM to get my setup back up to speed after Sunday night's dec axis shenanigans.  I re-aligned the mount with two alignment stars and two calibration stars, and focused using Deneb and my Bahtinov mask, since the  RoboFocuser still didn't want to talk to my computer.  The dec axis didn't go crazy on the stars in the west, even pretty far south, woo hoo! 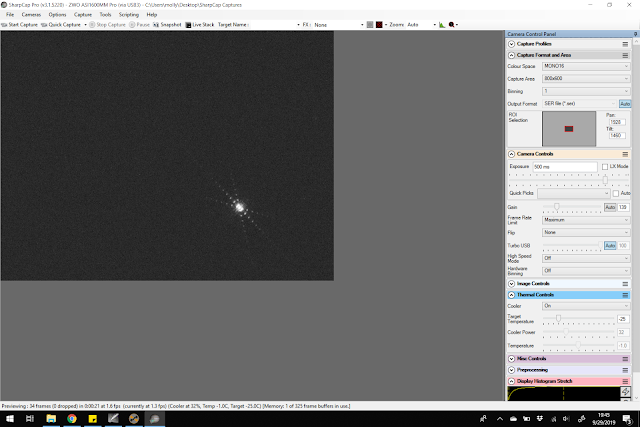 Picture was actually from Sunday night, but same diff.

I've got my ZWO ASI1600MM Pro attached to my Takahashi FSQ-106N on my Celestron AVX mount, with an Astronomik hydrogen-alpha narrowband filter in place.  Narrowband filters only pass a small band of light through at specific, common emissions from deep sky objects; H-alpha is an emission from hydrogen at 656.3 nm, or a deep red.  Because it selects only a few nm-wide swath of the light spectrum, it blocks all other light, including city lights!  So the contrast is a lot better, even in heavy light pollution.

Now it was time to try again with the automated meridian flip, since I didn't have clouds this time.  (Well, a few threatened in the south, but never really came in).  I picked a star just east of the meridian and told the mount to slew there, but it was still going to the west!  So I double-checked the meridian setting on the mount, and sure enough, it was on "favor west."  So I switched it to "favor east" and tried again.  I made it over to the test star, waited 4 minutes, aaaaand...success! 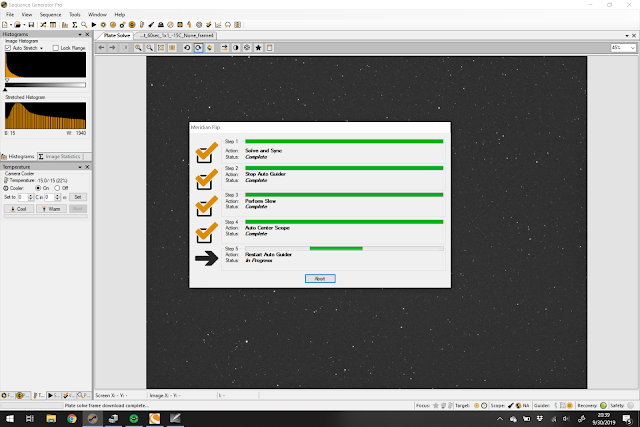 Super exciting!  PHD started doing some weird stuff, but I needed to re-calibrate anyway after accidentally knocking the guide scope loose over the weekend and having to re-tighten it almost certainly at a different angle and pointing position than I had it before.

After re-calibration of PHD, I started the rest of the sequence, beginning with the Eastern Veil Nebula, and I waited for the first 5-minute frame to download.  When it came in...Wowee!! My jaw dropped! 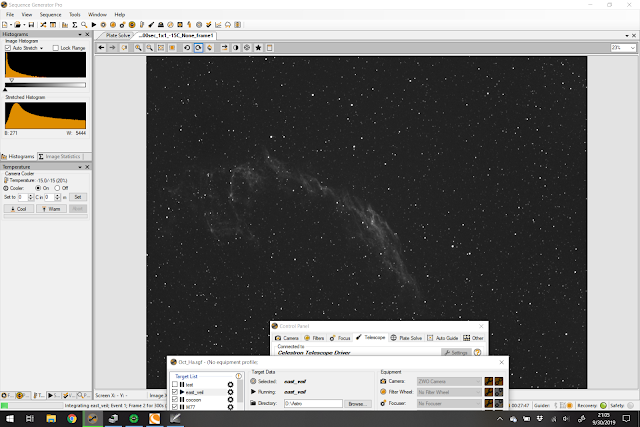 So gorgeous!!  I'm really excited about this!  And my stars looked great when I zoomed in!

Now that that was rolling along well, I went inside for a while, and then came back out while it was performing the meridian flip on the Eastern Veil.  I watched it slew, plate solve, and start imaging, and all went great!  Very exciting.

Then, as I was watching the guiding in PHD, the dec axis started to drift again like it had for the test star, and it just kept going and going!  On my Celestron mounts, usually I have to let guiding sort of settle for a few minutes to take up the backlash.  This time though, it looked fine for about 30 seconds or so, and then go way off and not come back. 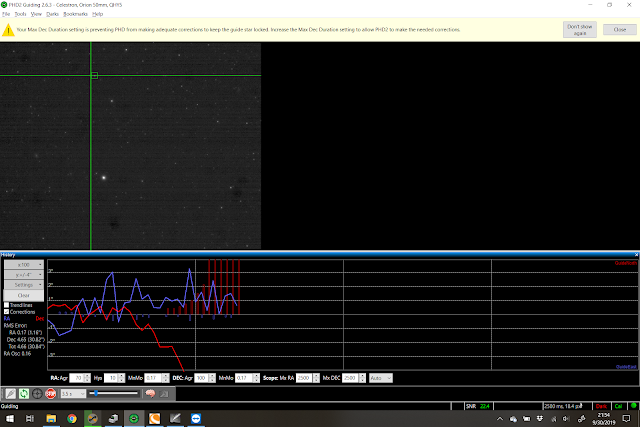 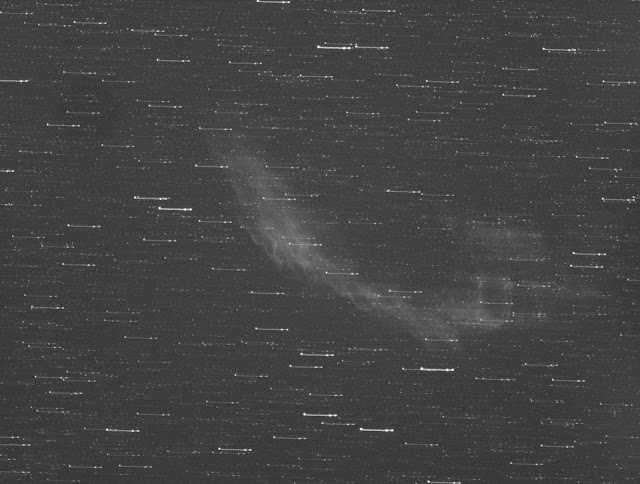 I went over to PHD to make sure that the calibration actually flipped, but I wasn't sure how to tell.  So I flipped it myself, and watched the graph for a while.  It would be fine after re-acquiring the guide star, and then it would run away again.  This went on a few times, same pattern, so it obviously wasn't just a sticky spot or taking up the backlash.

Finally, I gave up on imaging west of the meridian, and I went inside and remoted into my tablet while I modified the sequence to just do the eastern sky once again.  It was getting chilly outside!  But I've also finally achieved another astrophotography goal -- remote control!

I'm pretty excited to get some images of the Rosette Nebula and the Orion Nebula in H-alpha!  I haven't taken a new Rosette Nebula image since my first super epic one back in February 2017.

By the time I got the sequence re-configured, and after Sequence Generator Pro had some issues re-starting guiding in PHD, the next target after the Eastern Veil Nebula, the Cocoon Nebula, was close to crossing itself, so I only got two frames in.  Then it slewed to galaxy M77, Cetus A, but I realized as it was slewing that M77 was a lot lower than I had realized!  So I needed to fill in the gap with another target until M77 was higher.  Time for a good-ol' target hunt!

I scrolled through SkySafari on my phone, but couldn't come up with much that wasn't either too small, didn't glow in hydrogen alpha, or outside the visible range of my scope between my house, my neighbor's garage, my plum tree, and my lemon tree.  I can get some of the high-altitude north above my trees and house, though, so I thought I'd try for the Bubble Nebula, which would be great in H-alpha.

Images started coming in, but the stars looked weird.  At first, I couldn't quite put my finger on why it looked familiar, but I went outside to see if something was up.  When I got down to the scope, I heard a rustling sound on the ground next to my neighbor's garage.  I turned on my headlamp to white light, thinking it was a raccoon, and saw it -- nope nope nope, it was a skunk!  So I hurried back inside quietly and quickly as I could!  I waited a few minutes, and then stopped the sequence and turned on my backyard lights.  I didn't see him.  So I went outside and shined my headlamp into the darker areas -- no sign.  Phew!  That was close!

I turned my attention back to my scope, and saw that unfortunately, the Bubble Nebula was indeed behind my plum tree.  The weird star shapes must have been diffraction through the branches. 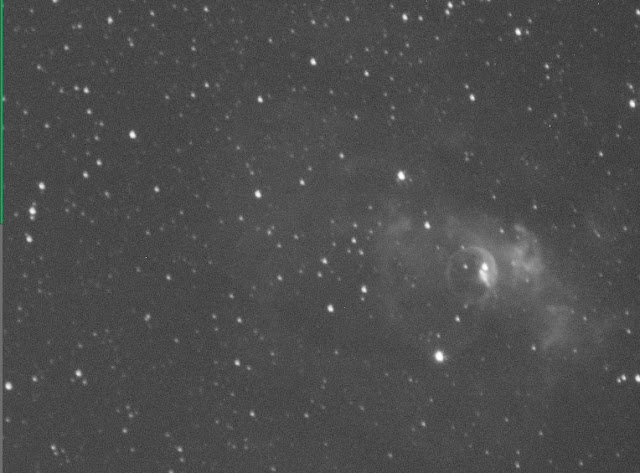 Soooooo I'd have to choose a different target.  It was already 11 PM!  :(
After scouring the target lists, I finally just settled on M33.  I've already processed that image, but I could add some H-alpha to it to bring out the star-forming regions (of which M33 has many!)  M33 wasn't going to transit until 2 AM, so I wouldn't have to lose any imaging time while waiting for M77 to be high enough.

I watched M33 plate solve and take the first frame.  I zoomed in to look at the stars, and it was slightly out of focus!  Rawr, I really need to get the RoboFocus working.  The Tak really is sensitive to temperature changes!  So I threw my sweater on and went back outside to adjust the focus on nearby star Mirach, which I queued the mount to slew to using Cartes du Ciel from inside the house on the remote desktop.

I waited for the next M33 frame to come in after slewing back to it and re-centering it, and it looked much better. 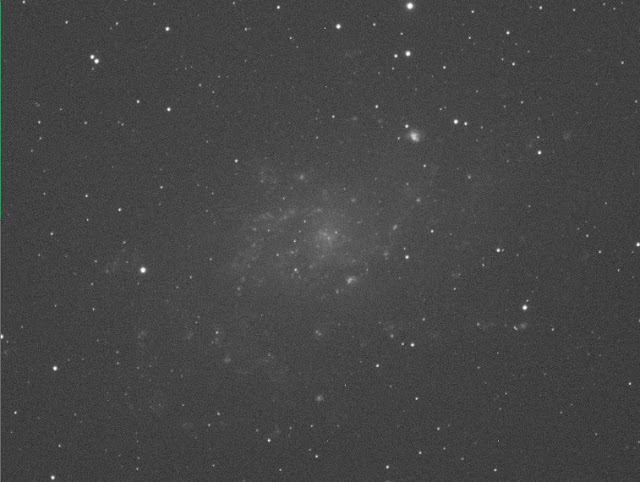 It doesn't look like much now, but it will...

Finally, after midnight, I went to bed.  Hopefully things would run smoothly the rest of the night!
See, even with this automation thing going, I'm still up late sometimes, trying to get things to work!

Table of Contents
Posted by AstronoMolly at 10:52 PM