I went outside in the morning to swap out cameras so that I can send my Astronomik CLS filter in to Oceanside Photo & Telescope to trade for the CCD version of the same filter.  In the meantime, I'm going to use my ZWO ASI1600MM Pro to do some hydrogen-alpha imaging! 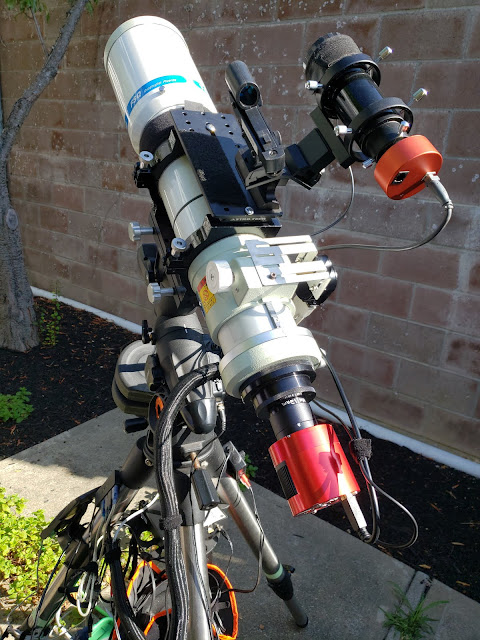 Gear pictured:
- Mount: Celestron Advanced VX
- Telescope: Takahashi FSQ-106N, connected with clamps
- Camera: ZWO ASI1600MM Pro, attached with a T-thread connector to the Tak, with a T-thread Astronomik hydrogen-alpha filter in between
- Guide scope: Orion 50mm mini-guidescope
- Guide camera: QHY5
Also pictured is my red dot finder and the dew heater straps wrapped around both the Tak and the guidescope

My second goal for the morning was to see if my focuser was going to work while it was cooler outside.  I turned it on, and sure enough, the manual buttons on the controller worked!  For a little while, at least.  Once the sun hit it, it didn't want to work anymore, and I couldn't get it to talk to my computer either.  I will try again tonight...

My third goal was to pop open the declination axis motor housing and see what the deal was with the jumping around that occurs only when the mount is facing west in right ascension.  First, I needed to re-verify that the behavior was still happening before I took the load off the top, so I slewed westward.  So far, so good.  I made it all the way south, and it was working just fine!  Then I had it slew back to home position, and picked a star currently up in the south (although invisible in the daylight) to slew to.  It did...with no problems!  My lemon tree doesn't block the sky until about 55 degrees of altitude, so now that looking west appears to be working again for unknown reasons, I can image across the meridian and spend more time on targets.  Tonight, I will be testing out the automated meridian flip feature in Sequence Generator Pro, in addition to trying to get the focuser to work.  Lots of work to do!

After church and The Astro Imaging Channel broadcast (which I was late to, unfortunately), I went outside during twilight to do my testing.  I first tried to get the Robofocus working, but it was behaving similarly as before, where it wouldn't respond to me pressing the in/out buttons, and would beep for a long time after a button press.  I decided just to leave it on for a while and worked on setting up the automated meridian flip instead.

After re-focusing on Deneb, some clouds started rolling through, but the forecast said these would clear after 9 or so.  I got all the settings configured in both the permanent Equipment Profile Manager and the version of that I was running with my sequence, which mostly just involved ticking the box in the Telescope settings and choosing a number of minutes after transit in which to do the flip.  After getting all of this set up, however, the "time to flip" readout on the control panel window still said "N/A," and the "run" button was still grayed out.  It also didn't flip for the test start I gave it.  Finally, I restarted Sequence Generator Pro.  That worked -- it showed a time to flip, woot!

I picked another star that was about to transit, copied and pasted the coordinates from Cartes du Ciel into the target coordinates box in SGP, watched as it slewed to and centered the target, and then waited.  However, clouds kept rolling through, and PHD would abort the sequence after several attempts to re-acquire the guide star, and SGP would go into Recovery Mode, waiting 5 minutes to try again.  Finally, after several attempts, I got a break in the clouds, tracked a star a few minutes past the meridian, and then watched it flip! 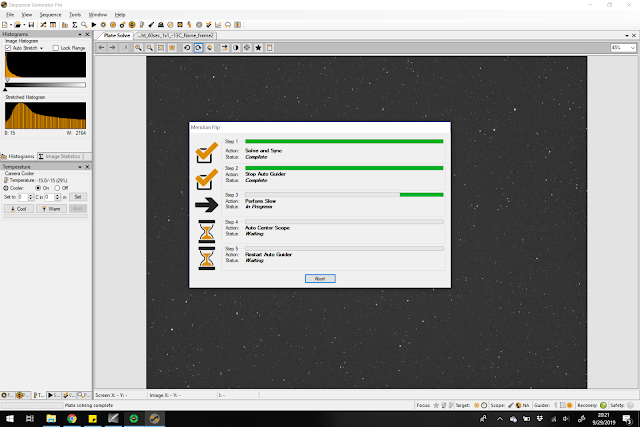 The mount almost made it over to the star....dec had finished slewing, and it was going the last bit of distance in RA...it slowed for final approach...and then the dec axis started rapidly slewing back and forth again! 😭  This was especially weird because dec had finished slewing.  So I shut off the scope, manually moved it back to home position, and made sure the dec cable from the mount was nice and tight.  (Seriously why are we still using RJ-11.)  After I turned the power back on, I had it restore the last calibration (a very handy feature for power failures!), and I was going to test and see if my lining up the index marks was close enough to be able to use that alignment model or whether I would need to re-align, but the clouds had grown thick enough and over the whole sky that it was useless.  The forecast said the clouds would be clearing before 10 now, so I finally trudged inside around 8:30 PM to make some dinner.

I went back out at 9:50 PM, and it had only gotten cloudier!  However, the focuser was working -- the manual buttons, at least!  So I tried to connect on my computer again, but still "No response from RoboFocus!" even after triple-checking that I had the right COM port setting.

I decided to restart my computer, and I went ahead and ran the update that was waiting, since I had a bad feeling that if I didn't, it would run in the middle of the night and disrupt the sequence.  Unfortunately, I forgot that this particular update was a big feature update, so it was taking ages to install.  So I went back to the couch to watch more Star Trek: Deep Space Nine.  I figured if the update finished, I would just reconfigure the sequence for one-side-of-the-sky operation and I'd try again.

I checked Astropheric and my regular weather apps for an update -- it didn't look good.  My Google weather app was showing clouds until at least 1 AM now, and Astropheric was showing clouds after 2 AM.  (ClearSky hasn't been working for me in like the past two weeks, at least not the phone app).  And my tablet was still updating.  So I called it a night and went to bed.  Will try again tomorrow!


Table of Contents
Posted by AstronoMolly at 11:06 PM