Another clear night right away to try again with the backyard rig.  After the disengagement of the dec axis gears the night before when it didn't successfully park,  I thought all was well that morning when I was able to slew the mount up around the north, but as it turned out, I was wrong.  When I had it slew to Deneb for alignment, the dec axis stopped slewing partway there.  I used the controls on the computer in the Celestron PWI app to slew the mount by hand, and sure enough, RA was slewing fine, but dec wasn't moving!  So in the dark, I took the mount apart to see what was up. 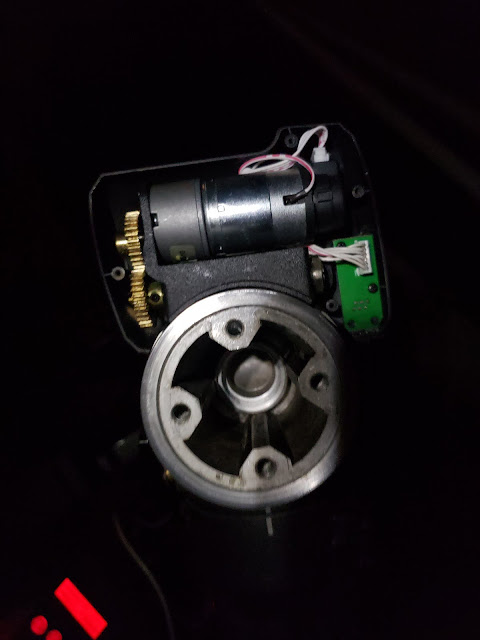 Looking down into my Celestron AVX mount with the dovetail saddle and declination axis motor cover removed.

I ran inside and grabbed my allen wrenches and screwdrivers, and then took my telescope and everything attached to it off as one rather heavy piece, carefully set it on the ground.  I started to remove the top cover of the dec axis motor box, but I couldn't get to one of the screws without taking off the dovetail saddle.  So I removed that too, and then also ended up having to take off the bottom cover of the dec axis motor box.  There was a small pile of fine golden dust in the corner of the box -- the gears must have ground on each other at some point.  Greaaaaat.  The motor drive gear and the worm drive gear had become offset from each other, and the motor drive gear was pushed in very tightly with the worm drive gear.  Having recently adjusted the motor drive gear to mesh more closely with the worm drive gear to take up the backlash, I knew exactly how to add a little separation back and get them re-aligned.

The motor drive gear is attached to the motor shaft with some tiny hex bolts, so I loosened those and pulled the gear off.  Then I loosened the screws holding the motor to the block, and put the gear back on.  This allows you to slide the motor back and forth so you can set exactly how tightly you want the gears meshed.  So I pulled it back a bit, and once I was satisfied with the fit, I removed the gear again, tightened the motor screws, and then put the gear back on and tightened it down.  I put the dovetail saddle back on, and then tested the slewing.  It slewed normally again!  Woo hoo!  So I re-attached the telescope, hooked everything back up, and re-started alignment.  Luckily, I didn't need to re-polar align, so I just put in some stars in the eastern half of the sky where I was imaging.

I re-loaded the script with all of the targets from the night before, and checked that the settings I had changed that morning to actually succeed at parking were still set.  Everything looked good to go.  I hit the start button, and off it went! 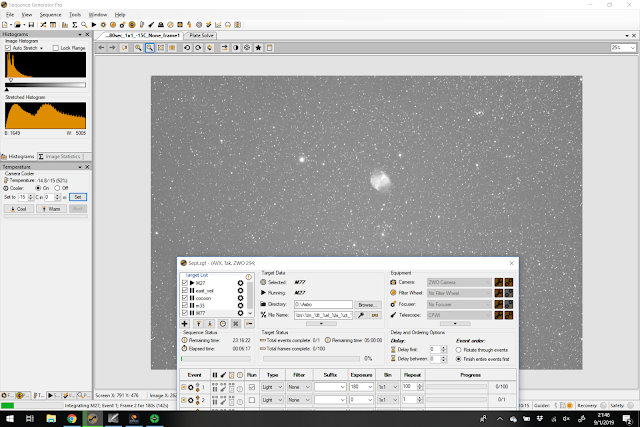 SequenceGenerator Pro
(Check out the final image of M27!)

I came back out around 10:15 to watch it switch targets from M27 to the Eastern Veil Nebula, which went smoothly and happily.  Then I went to bed!  So glorious.

The next morning, I woke up and looked out the back door to a beautiful sight: my telescope, pointing north and parked.  The camera cooler had turned off as well, and I had a full night of images.  So amazing!! 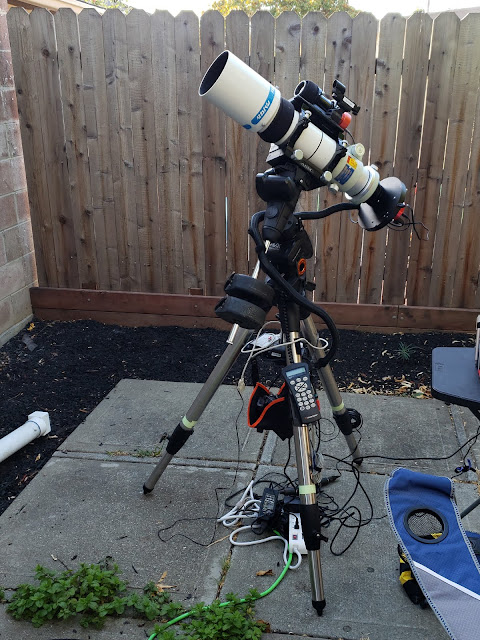 So the plan is, I'm going to run this multi-target list every night I can, tracking targets rising in the east until the hit the meridian, and then heading back down to the next target.  It doesn't get me a lot of frames in one night, but over many nights, it will get me a lot of frames.  So long as a passing cloud doesn't end the sequence early!  Super excited about this.  Hello sleep!  The targets for the next couple of weeks are: M27 Dumbbell Nebula, Eastern Veil Nebula, Cocoon Nebula, M33 Triangulum Galaxy, and M77 Cetus A galaxy.  Right now I'm sticking to 3-minute subframes, but once it looks like that is generally working well with the autoguiding, I'll try bumping up to 5 minutes, which is at least what I'll need for narrowband imaging.  My light pollution filter (Astronomik CLS) seems to be doing a pretty good job for my Bortle 7 skies, and the histograms of my images are still pretty far to the left, so I want to try for 5 minutes.  I have my new ZWO ASI294MC color CMOS camera attached now, thank you to my good friend and astro-buddy John, and I'll be switching back and forth to the ZWO ASI1600MM Pro monochrome CMOS camera for doing narrowband once I actually get myself some filters and another carousel for my filter wheel.  Exciting times ahead!

Table of Contents
Posted by AstronoMolly at 4:13 PM