Full-moon week is finally over, and I can start imaging again!  Not for very long yet, unfortunately, but each night I'll be able to image a little later before moonrise.  My telescope was snug as a bug under its Telegizmos 365 cover, especially with all the power cables inside of the water-resistant cable box.  Good thing too -- it rained on Sunday and Monday mornings, but the scope and cables were nice and dry!  How convenient for the first rain I've seen since I moved here a month ago to happen during full moon week :D

Last night, the moon was not up until 9:50, and since astronomical darkness started at about 8:40, I'd be able to squeeze in about an hour of imaging between two targets, M27 Dumbbell Nebula and the Eastern Veil Nebula.  Last night was trivia night with my fellow grad students, so I made a quick trip home to get the scope set up to run autonomously during trivia, since I wouldn't be back until after 10 PM.  So I got it uncovered and hooked up, which went smoothly.  However, since I had removed the camera last weekend while trying to figure out a way to attach my luminance filter to cut IR since my Astronomik CLS filter alone does not, I needed some way to verify that it was still in focus.  It was too bright for stars still at 6:30 PM while I was doing this, but I figured the camera might be able to see Jupiter.  Unfortunately, Jupiter was well west, and I haven't worked on the declination axis issue yet and really didn't want to lose alignment in case it slipped again.  So I checked SkySafari to see where Saturn was -- still east of the meridian.  It was magnitude 0.4, so I figured I might be able to see it in the camera.  So I commanded the scope to slew over to Saturn, but the dec axis slipped a little bit just before it got there!  Luckily the scope caught back up and didn't seem to lose alignment.

I turned on SharpCap and connected my ZWO ASI294MC, and sure enough, there was a little speck!  I zoomed in, and it was, indeed, Mars.  (By zooming in, I mean that I cropped the image.) 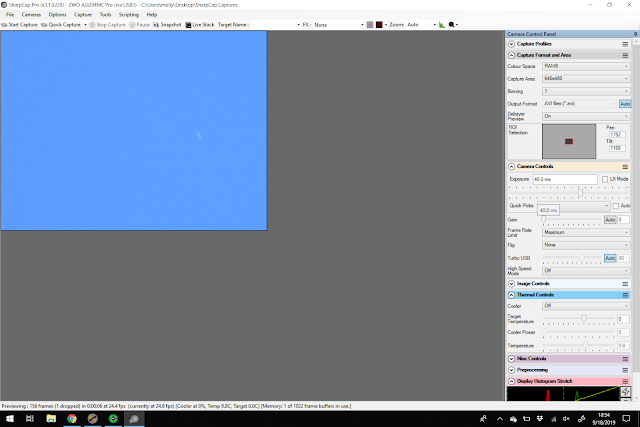 It looked pretty in-focus to me!  So I told the scope to go back to the home position, I connected SequenceGenerator Pro and PHD to all my hardware, and then I headed out the door for trivia.

When I got back around 10:20, the scope was home, and the sequence complete, since I told it to end the sequence at 10:15.  PHD went whacko for some reason near the end, which ruined the last frame on the Eastern Veil Nebula that came in, but all of the other frames looked fine. 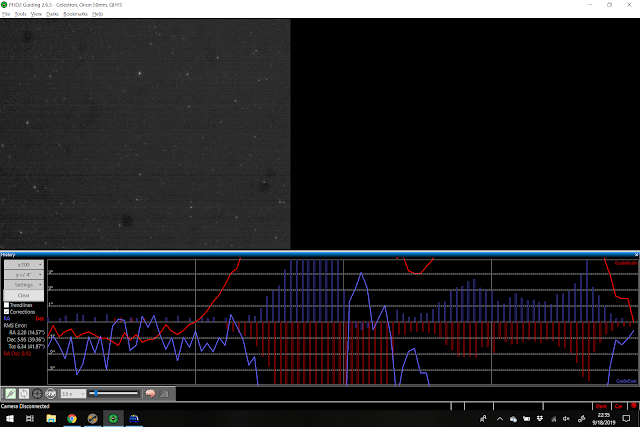 The forecast is looking clear for the next many days, so looking forward to more data!  I've also already built my October sequence, which includes the Cocoon Nebula, Stephan's Quintet, galaxy M74, the Pleiades, the Rosette Nebula, and M42, the Great Nebula of Orion (which I'll activate later in the month when it doesn't come up so close to sunrise).  Since I completed my image of M33 from this month already, I'm going to look into swapping it out for another target today for the rest of September.  Lots of fun ahead!

Table of Contents
Posted by AstronoMolly at 9:08 AM