I stayed on campus in the so-called "Panic Room" (graduate student study lounge) late working on Electricity & Magnetism homework, hoping to finish before I went home.  I did, but the last hour was painful!  I may be a part-time night owl thanks to astronomy, but my peak brain hours still end around 4 PM.

I got home around 9:15, got the scope uncovered and plugged in, and updated the transit times for all my targets in Sequence Generator Pro.  The stars in the plate solve image for the Eastern Veil Nebula looked a tad bigger than usual, so I slewed to Deneb to re-focus.  I had been contemplating re-aligning and re-polar-aligning my telescope since surely I've bumped things around with taking the cover on and off and the camera off once or twice, but nope, Deneb was very nearly dead-center on the goto.  I'll take it!  I wanted the images to download a little faster (I was using SGP to focus instead of my usual SharpCap because it was already cooling -- SharpCap downloads much faster than SGP), so I set the binning to 3x3.  However, this broke SGP, since it made the image no longer an even number of pixels in size, so I had to force-quit SGP and restart.  Luckily, I caught the camera cooler before it had warmed up too much, and I was pretty quickly back in the focusing routine (this time with just 2x2).  It was just a hair out of focus, so I adjusted it. 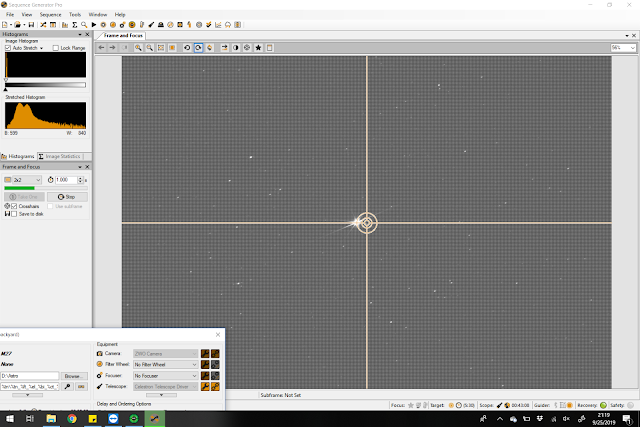 Bahtinov-mask-spikes, post-focus (my focuser only has one speed knob, so no fine adjustment knob, so it's a little tricky to get it perfect)

After that, I went ahead and started the sequence.  The forecast looked like it would be clear all night, woot!  I decided I wanted to see if the mount could handle 5-minute frames, even though I haven't worked on smoothing out the tracking yet, so I set M77 to have 5-minute frames this time.  Then I went to bed.  I had a dream again that it rained on my telescope!

It was dry the next morning, of course, and I downloaded all my images while eating breakfast.  As it turned out, after the Eastern Veil Nebula and partway through the Cocoon Nebula, as everything cooled off from the unusually high heat of the day (95F in Berkeley!), the scope de-focused, and I wound up having to delete pretty much all of my images from that night!  It was probably still focused before I messed with it, but since it was hot, it didn't look that way.  I have heard that Takahashis, for all of their optical glory, have pretty bad temperature stabilization of focus. 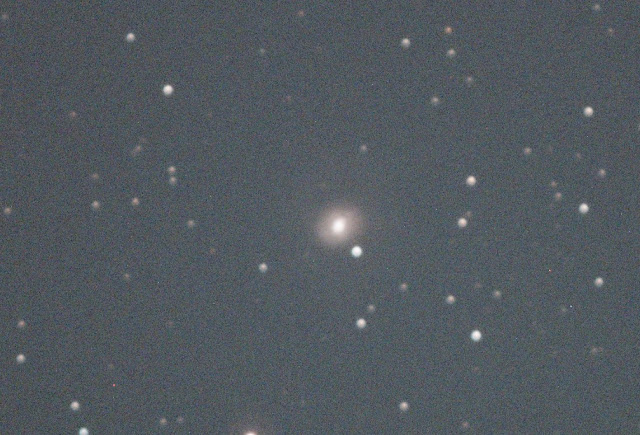 Cropped view of the center of the image of a single frame of M77.  This 5-minute frame shows two things, one good and one bad: the bad news is, the focus goes way out with changes in temperature.  The good news is, those blurry stars are still round, suggesting that I may still currently be able to get 5-minute subframes out of this mount!

This is increasing the urgency for me to fix the RoboFocuser on that scope.  My (extremely generous) uncle included it in the package when he sold me the scope, but I haven't really needed it yet, since my Astronomik filters are all parfocal with each other.  I used it at the Texas Star Party, but only with the manual unit since I couldn't get it to talk to my computer.  Then I learned that if you shut off the power to it, it disengages so you can manually focus without having to uninstall it.  (Very handy feature).  However, my last attempt to get it talking to my computer failed as well a few weeks ago, and I couldn't even get the manual buttons to work.  So after becoming impatient with my quantum mechanics homework on Thursday morning, I went outside to give it another go.

I uncovered the scope, plugged the focuser back into the control box, and powered it on.  I loosened the set screw on the focuser in case it did decide to work.  The red LED on the box came on, but the in and out manual buttons still didn't work.  It was hot in the sun of my backyard, so I went up onto my back porch to sit in my other folding chair while I Googled solutions.  Just as I was sitting down, the thing started emitting a high-pitched continuous tone!  So I ran over and shut it off.  When I turned it back on, the red LED wasn't coming on.  Well crap.  I didn't even do anything wrong this time, I swear!!  I posted about it on my Facebook page, and one of my good friend astro-buddies asked if it was the temperature-compensating model.  I went out and took a photo of the box and saw that it was indeed, so that got me thinking that maybe it has an auto-shutoff feature above a certain temperature or something, although it would have to have an internal sensor because I don't have a thermometer or anything plugged into it.  More research is required!

While I'm sorting that out, I also need to send my Astronomik CLS filter into OPT so I can do a trade + money for the Astronomik CLS-CCD filter.  I can't really image without the CLS filter I don't think, so what I might do instead is now that I've seen that 5-minute images can work still before I go through and fix the dec axis, I'm going to detach the ZWO ASI294MC Pro I've been running lately and attach my ZWO ASI1600MM Pro instead with my T-threaded hydrogen alpha filter that I can't fit inside my filter wheel and I'll try doing some narrowband imaging.  I got some decent narrowband shots with 5-minute subframes on the less sensitive SBIG STF-8300M I borrowed (also from my uncle), so I have reasonable confidence that H-alpha images will turn out well with the ZWO camera.  Alternatively, I still have the SBIG STF-8300M at the moment with its full complement of LRGB and narrowband filters, so I might throw that one on there instead, even though I don't like it as much.  Of course, fall is a bad time of year for narrowband in the eastern sky since we're heading into the in-between season of the summer Milky Way setting and the winter Milky Way not rising until the wee hours of the morning, but I'm sure I can scrape up some targets for the first half of the night until the wintertime nebulae rise in the early hours.  Can't waste even one of these clear, low-moon nights!

I went ahead and processed another image today -- the Eastern Veil Nebula! 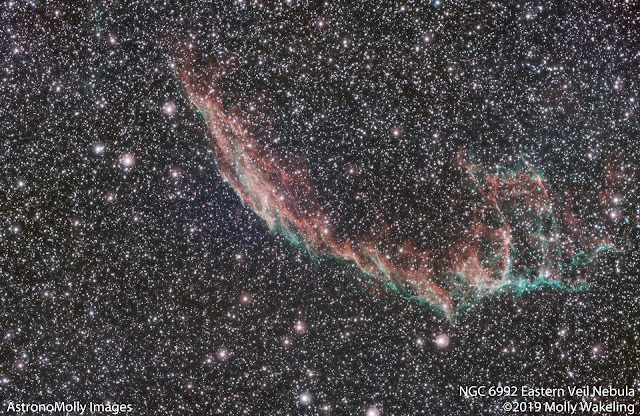 I was so thrilled with how clear and detailed this image came out!  I even made a zoomed-in image and increased the DPI: 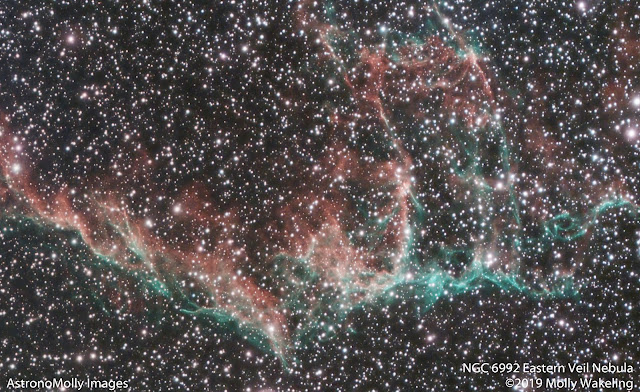 Besides the IR-bloated stars, I'm really excited about this image.  I'll probably re-process it once I take some time to try out some new star-reduction algorithms, but time is limited while I slog through homework!

This is a super cool object. It's a supernova remnant! It's just one side of the whole structure, known as the Cygnus Loop. A star 20 times the mass of our sun exploded about 8,000 years ago, and the material from the star has been expanding out into space ever since. Today, the area spans six times the width of the full moon from our perspective here on Earth, and is thought to be about 1,470 lightyears away. The filamentary structure is a result of us seeing this nebula edge-on; the filaments are really shock fronts. The reason we can still see this glowing gas and dust is because as it speeds through space at 105 miles per second, the shock front interacts with the interstellar medium and emits light, not only in the visible spectrum, but in radio, x-ray, UV and IR as well.

I got a chance to explore this region using a 28-inch Dobsonian reflector with an OIII filter while I was in Chile this summer, and it was so amazing! It has such rich detail and fine structure. It's also in a very star-rich part of the sky, up in the Milky Way.

Despite the light pollution, my backyard images have been easy to process.  The CLS filter really does a lot to kill the light pollution, and whatever it doesn't get, DynamicBackgroundExtraction picks up the rest.  Sometimes I've had to run DBE twice to get all the gradients, but it works wonders.

After several nights of collecting hydrogen-alpha data on the Eastern Veil Nebula, I put together the image this morning! 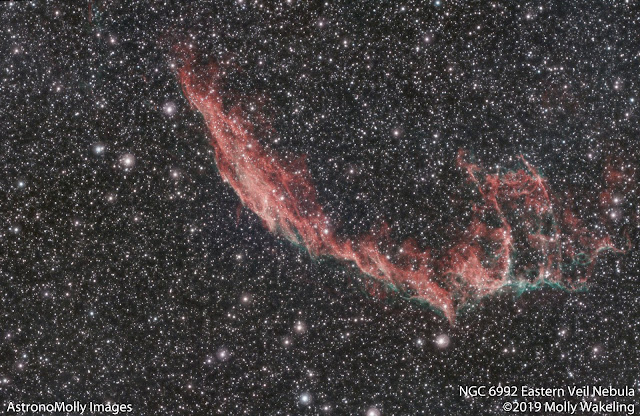 I like this image much more than the first one.  I have more detail and saturation in the red areas, and I was able to pull out a bit more nebulosity.  In addition, I tried a star-reduction technique from Light Vortex Astronomy that worked great on this image.

Table of Contents
Posted by AstronoMolly at 10:06 PM