The moon is useful for a lot of things.  For one thing, it probably made life on Earth possible because of the tides and stuff.  It gave us something nearby to land on.  It helps us study the sun during solar eclipses.  It's helped us learn about the formation of our solar system, and our own planet.  I will even admit that it's quite beautiful to look at in the telescope, and even naked eye.

However, it is SO BRIGHT.  I have a perfectly clear night, the forecast is even calling for good seeing and transparency conditions, but I can't image because the moon is up nearly all night, and it's nearly full!  And it won't rise late enough to squeeze in any imaging between post-sunset darkness and moonrise until a week from now :(  So a week of taking darks it is!

Except, I'm having a bit of a problem with the dark frames.  Here is a single dark frame, auto-stretched: 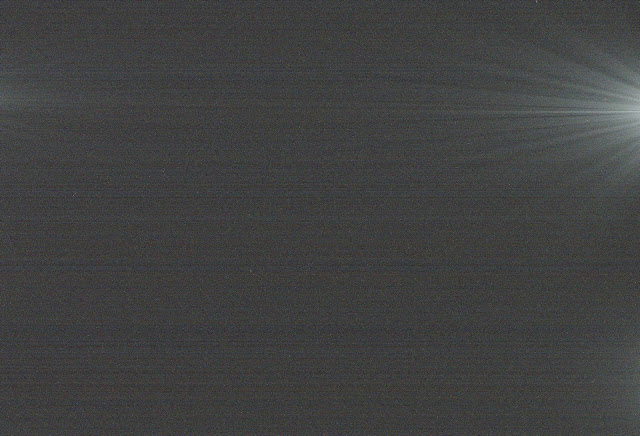 It looks like a bright light, just off the edge of the frame.  Now, this is a 10-minute long frame (on my ZWO ASI294MC Pro), so it shines brighter above the background, but it's present in shorter-exposure frames too, just less obvious from an auto-stretch.  My first thought was that I had a light leak somewhere, so I made sure I had the cover over the scope the next time I took darks.  But the result was the same.  I debayered the image so I could see if the light had color, but it was white, which either means it's actually a white light, or it's far enough infrared to not look reddish and just appear white (much like how a remote control looks in your cell phone camera).  The extra weird part is that it's not really showing up in the light frames.  So then I thought, maybe it's a lot dimmer than it looks, and the light pollution and target are so much brighter than it that it won't show up.  However, when I calibrated some light frames with matching dark frames, the light showed up inversely as a shadow, since it had been subtracted out from what wasn't really there in the image.  Very weird.  Further testing is needed...unfortunately this camera doesn't have a physical shutter, so light could be leaking in from somewhere, but I have no idea where, except for its own red LED that is quite far away and facing the opposite direction as the camera chip.  (And I haven't seen this in my ZWO ASI1600MM Pro, which is the same body design).  More testing is needed...

Anyway, since the moon was setting around 3:15 AM, I set the telescope to start at 3 AM and just do M33, M77, and the Flaming Star Nebula before sunrise.  Worked again, no problems!  Now I have 168x3-minute frames on M33, which is 8.7 hours.  That is hands-down the most amount of data I've ever collected on a single target on the same imaging rig!  So I think I'm going to go ahead and process it during this full-moon break and see how things go.  Get excited!