I biked to school on Tuesday, since I drove in the morning, but forgot a few important things at home, and knew I wouldn't be able to find a spot again if I drove back.  I'm a little out of biking shape, and it's a general uphill to campus, so it was a bit of a brutal ride!  But it was pretty fun.  I rode home in the dark, and it was clear!  So when I got home, I threw my backpack off, quickly fed the cats, and then darted outside to start imaging.  First, though, I had to re-align again, since I wasn't able to complete the alignment last night.

After uncovering the scope and getting everything connected, I used the Celestron PWI app to slew to some stars up above Polaris, since as I discovered last night, something's still wrong with my declination axis, and I can't slew very far south if I'm facing the west side of the meridian.  But it still did the rapid-wagging thing it did yesterday!  So I decided to characterize the problem a bit.  I disconnected the mount from PWI and rebooted it, and then used the hand controller to slew around and see where it started.  However, the dec axis behaved normally, all the way around!  Now I'm wondering if it's an issue with PWI.  It's relatively new software, and only very recently released for their non-USB mounts like my AVX.  So I decided to run things the ol'-fashioned way -- using the hand controller and the ASCOM driver instead of PWI.

I aligned, re-polar aligned (one of the legs had sunk accidentally a little bit), and then while I was doing the second alignment post-polar-alignment, the dec axis did the wagging thing for a southerly star on the western half.  So I restarted the alignment (luckily I didn't need to polar align again), and picked western stars that were less far south.  Finally, finally, I got the mount aligned.

I started the sequence to start imaging, but plate solving using the Astrometry.net downloaded offline server wasn't working in SequenceGenerator Pro.  My tablet's wifi card driver had died, so I had to reboot the tablet to get it working again so that I could use Astrometry.net's remote server instead.   (One of the benefits of not using software to run the mount!)  However, after the reboot with functional wifi, the plate solver still didn't want to work.  So I switched back to the local server, and that finally worked.  It is super slow though, which I don't understand -- it has my scope's focal length, camera sensor size, the coordinates where my scope should be pointing, and I'm even binning the image 2x2 to make it smaller, so it should be a pretty quick plate solve, since it has all of this information and shouldn't have to do a blind solve.  Rawr.  The plate solving helps to get the image centered in the frame when the mount didn't quite do it.  It's not doing a great job, however -- it does the initial solve, moves the mount, and then solves again to check, but it's usually just back in the same spot as before.  I increased the number of attempts, but it still stops after the first move.

I also adjusted the target-switch times in the sequence, since everything was crossing the meridian about six minutes earlier than when I had first programmed the sequence.  I really didn't want the scope to go past the meridian, since even though the mount can go as far back as 20 degrees past, I haven't yet fixed the issue of the dec axis coming loose and sliding out a tiny bit, which was probably the cause of it not being able to park on the first night.

Once everything was rolling, I went inside and went to bed, hoping that it would still successfully park.  (I did test earlier that it would park using the ASCOM command instead of PWI). 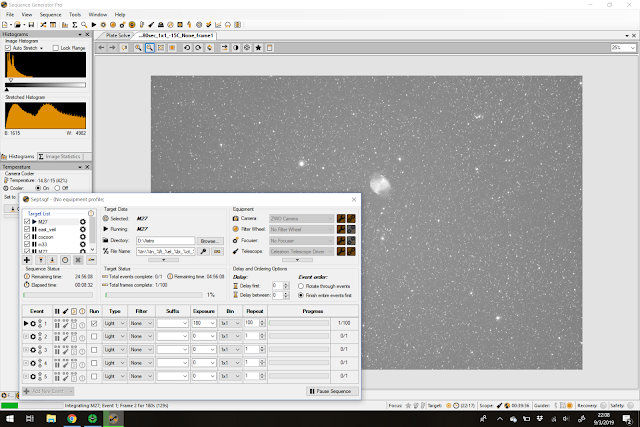 The next morning, I went and checked on it -- yup, it parked, and the camera warmed!  It got through M27 Dumbbell Nebula and the Eastern Veil Nebula, but the log showed that it failed to plate solve the Cocoon Nebula.  Now whether this was due to a passing cloud or the plate solver not working again, I'm not sure.  Before I powered everything down, I checked that parking the mount in SGP actually put it into "hibernate" mode, where it would save the point model, and this turned out to be the case.  Woot!  So all I had to do was disconnect hardware from SGP and the PHD2 autoguiding software, and then flip the main power strip switch and put the cover on.  Beautiful! 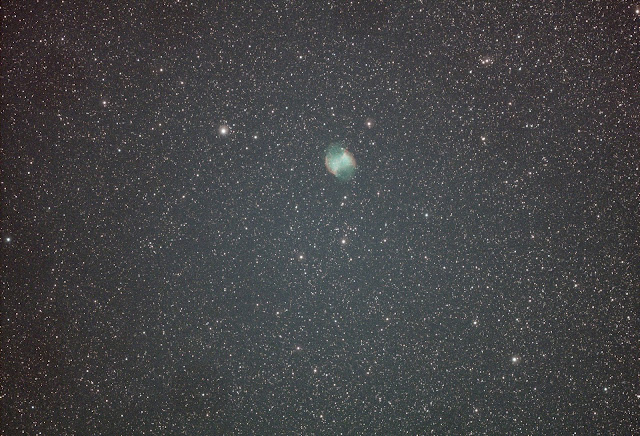 Table of Contents
Posted by AstronoMolly at 5:28 PM