The physics department graduate students held our "post-prelims party" on Saturday night, which was some good fun.  We had a good turnout, and the view from the back deck of the student's house who was hosting was gorgeous!  Wish I could set my telescope up on a deck like that!  I heard he had a great view, and I almost brought my DSLR on a tripod to do timelapse...almost.  ;)

Before I went, though, I got my telescope queued up to run without me, since it promised to be clear.  Shortly after sunset, before I had any stars, I pulled off the cover and the caps, and plugged in my tablet and got everything connected.  PHD connected to my guide camera (red hockey puck QHY5), but it couldn't grab any frames, so I rebooted PHD, and then it was happy.

Since my current last target, galaxy M77, transits at 4:44 AM now, that leaves another half an hour until the first light of dawn begins to appear at 5:13 AM, according to my handy "Calendar - Sun & Moon" app.  So I decided to add another target, since M77 will transit earlier and earlier, and sunrise will come later and later anyway.  After scrolling through SkySafari's "Best Deep Sky Objects" list and gating out targets that were too low or not in my open sky view, I settled on the Flaming Star Nebula.  I've tried it once before, way back in March 2017 on my astronomy club's Vixen 140mm neo-achromat, but I only got a couple of subframes that night and had other issues.  Time to try again!

The half-moon was just east of the meridian, so before I finished getting ready to head to the party, I slewed to it to grab some video.  I grabbed two -- one with the Astronomik CLS filter I've been using (it's currently sitting where my luminance filter previously sat, so I don't currently have a clear filter loaded), and the other with my infrared filter.  IR filters can help because infrared light isn't as disturbed by the atmosphere, generally speaking -- not at the super-near IR wavelengths, anyway.  I haven't processed the video yet (RegiStax is having issues with my one-shot color cameras), but here's a single frame! 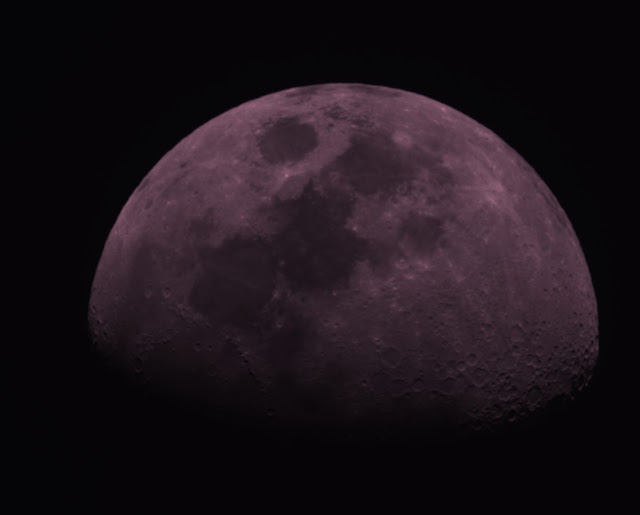 I cropped the frame size in SharpCap so that it would download faster, and got a nice 25 fps at this size on my ZWO ASI294MC, which is USB 3.0.  The moon does have a slight reddish tint -- that IR filter dips a tiny bit into the red, so if I hold it up to an incandescent lightbulb, I can see a little bit of very red light through it.  It's actually a Johnson-Cousins photometric filter, part of a photometric filter set I got from one of my previous astronomy club members.  The atmosphere was pretty shimmery, so we'll see how it turns out!

While at the party, I was telling some people about how my telescope was running autonomously in my backyard! :D  The idea also struck me -- I wonder if TeamViewer has a smartphone app?  So I went to the app store (I'm Android), and sure enough, they do!  I had recently installed TeamViewer on my tablet so that I could watch progress from inside (I'm prepping for winter here) after failing to get the new Windows Remote Desktop app to install on my desktop, since my Microsoft Store (and the Feedback Hub) haven't worked for months.  My tablet is also running Windows 10 Home edition instead of Pro, which I've read can't do remote desktop (although it might be accessible by it, maybe it just can't initiate a connection, which would be fine).  Anyway, TeamViewer is free for personal use, and it's been working great.

So the next day, I tested out the smartphone app -- and it totally worked!  Now I can check on the progress of my setup anytime, anywhere (especially my bed)!  And not only that, I can even control the computer from it.  Very exciting :D

Looking at my tablet screen from my smartphone!  Watching it slew to my next target and center it.

The sequence ended up ending early when it couldn't plate solve for M33's position -- perhaps some clouds rolled in, I have no idea.  Or maybe the plate solver just failed.  I need to investigate if there's a way to let the sequence try again after some time, or wait for the next target, or something.

So far, so good!  Making progress toward automation!

Posted by AstronoMolly at 10:23 PM