Another clear night! :D I went out at twilight to add more stars to the alignment model.  I slewed to Altair, but on its way over, the cable bundle got pulled too tight, which caused the dec axis to "jump," so I had to re-do the whole alignment.  I also wanted to add some western stars to help beef up the model.  Jupiter hadn't gone behind my lemon tree yet, so I commanded it to slew over there, but partway over, the dec axis motors started wagging it back and forth at high speed!  I shut off the power and reset back to home position.  I tried it again, starting with Jupiter, but got the same behavior!  It seemed to be happening past a certain declination heading south, but only on the western side of the meridian; I could go all the way to due south from the eastern side without issue.

So I picked some western stars that were much further north and just peaking out from behind the roof of my house.  I first went to Mizar -- I figured out that in the PWI app, you don't have to use just the couple of recommended stars in the alignment list, but you could click on any star on the map and use that as the alignment star. 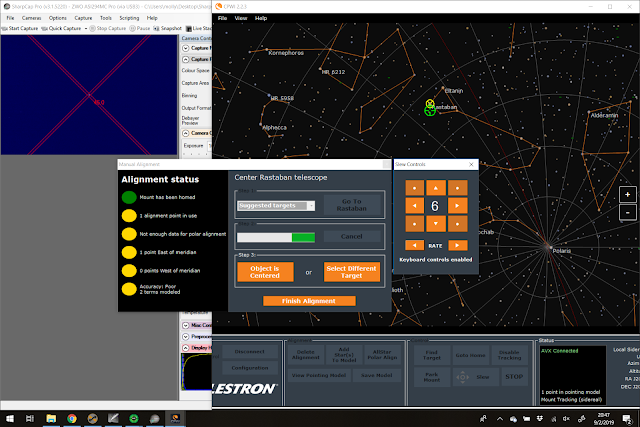 That worked fine, but by this point clouds were rolling in, and it was hard to find stars.  The clouds didn't show any sign of letting up, so I gave up on trying to image that night, and instead just put the caps and cover on and just took dark frames instead.  Darn!

Table of Contents
Posted by AstronoMolly at 5:03 PM