While I was procrastinating on homework, I was thinking about how dang long it takes for SequenceGenerator Pro to plate solve images so that it can center the target.  I'm losing precious imaging time!  So I decided to Google the problem and see if there were any parameters for using either the remote or local Astronometry.net server to make it go faster.  While I was researching, I found out that one of the supported plate solve programs, called PlateSolve2, was actually free!  It's developed by Planewave.  You don't even need to install a program -- SGP ships with the program, and you just need to install the databases.  So I downloaded both (which total less than a gigabyte, much smaller than Astrometry.net's databases), and the only parameters you have to configure are where the two databases are located (you really only need one, but having both makes it go faster) and the FOV of your telescope + camera system, in arcminutes.  Setup took minutes.

When it got dark after I had dinner, I went outside and got set up.  I also set up my DSLR on a tripod to run timelapse all night -- I thought it would be fun to watch the scope track the sky and switch between targets.  I'll post the video when I finish putting it together.  After figuring out where I wanted it and getting it focused, I got my tablet set up on the scope by about 8:45 PM.  I watched as it slewed to the Eastern Veil Nebula, and plate solved & centered the target in less than a minute!  Sooooooo much faster.  Woo hoo!! 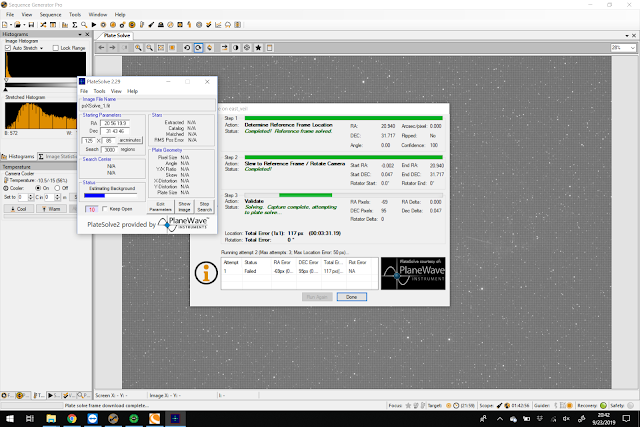 Around 9:50 PM, I went out one more time to check how it was doing, and watch it slew to the Cocoon Nebula.  I noticed that the battery was actually discharging, even though it was plugged in -- this can happen when it's using more power than the AC adapter can provide.  It's unusual, but I figured that maybe the new adapter I got so that I could keep one with me in my backpack wasn't up to snuff.  So I swapped it out with one inside that I knew worked, and turned down the performance to better battery mode.  The plate solve went smoothly and quickly, and I headed to bed.  I was going to check on progress later in the night from my phone, but my wifi card died again, so my tablet was offline.

I got up the next morning and went outside to close it up, and saw that it was at the slew limit position!  Luckily the dec axis didn't slide out this time, and the mount had stopped tracking when it hit the 20 degrees past the meridian mark.  What I suspected happened turned out to be true -- my tablet had continued to discharge while plugged into power, and had died sometime in the night.  Exactly when, I wasn't sure.  On the hand controller, I told it to go to the home position, which is did correctly and without issue.  Then I put it into hibernate mode.

After breakfast, my tablet had recharged enough for me to turn it on, so I copied off the images to see how far it got.  It looked like it had shut down a little after 1 AM.  Darn!  Half a night gone!  I decided to bring the possibly bad charger with me to school and test out whether it did the same thing.  It turned out to be fine, so I'll just chalk it up to it being on for several days and probably having an overabundance of stuff going on in the background.

I'll re-take the timelapse on Tuesday night, since having it stop partway through the night isn't as interesting.

I'll also set the slew limit to only 5 degrees to prevent what didn't happen this time, but did happen last time the sequence didn't stop the mount, which was the dec axis going haywire after slipping out a bit.  So I at least won't have to worry about that if my tablet dies or crashes -- the mount will stop tracking on its own.  The only thing left is that the camera cooler will continue to run, but usually I am awake before it gets very warm out or the sun hits it, so this shouldn't be too big of a deal.

Continuing to fine-tune the process!  Now I just need to set aside some time next weekend to look into the dec axis jumping problem when it's pointing west.  I'd like to be able to do meridian flips and image for the bit of sky I have between the meridian and my lemon tree, especially now that plate solving is working so well.  And I need to be able to track longer for putting on my longer-focal-length scopes, as well as using narrowband filters, so I need to make some adjustments since I'm seeing lots of little errors in the images.  I know it can run well, since it did so good at the Texas Star Party! 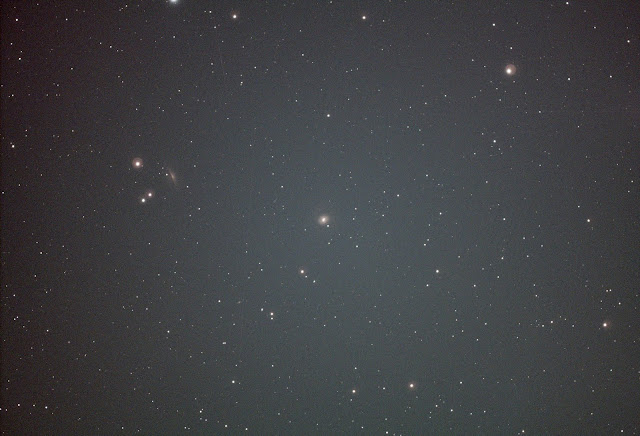 Got as far as M77 before the moon came up -- here it is, center, with NGC 1055 off to the left!
And some bloaty stars, since I'm still working on acquiring the Astronomik CLS-CCD filter that blocks IR.

Table of Contents
Posted by AstronoMolly at 10:46 PM