Saturday night, I gave a presentation to the Eastbay Astronomical Society (which I have recently joined now) called Origin of the Elements: The Story of Stellar Nucleosynthesis.  I gave the same talk at the 2018 Texas Star Party and at my last astronomy club, and it's a fun and information-packed talk.  It was really fun to build when I originally made it because there are a ton of unexpected surprises on how the elements are made that are non-intuitive.  For example, hydrogen fusion in stars would not be possible without quantum mechanics!  The Coulomb barrier (electric repulsion of hydrogen nuclei) is so high that in order to push two hydrogens close enough together to overcome the barrier and let the strong force take over to form the new nucleus, you need temperatures of 10 quadrillion degrees!  No star is that hot.  Instead, once the hydrogens get close to each other, the wavefunctions of the protons (because of particle-wave duality) start to overlap a tiny bit, which means there is a nonzero chance that the hydrogen nuclei can quantum-tunnel through the Coulomb barrier and thus fuse.  Super cool!

Before I left for the meeting, since it was late enough in the afternoon that my lemon tree shadowed my rig, I opened it up and got things connected.  I realized, however, that I needed my tablet for my presentation, since I use my main laptop (Cherenkov) for the slides and my tablet (Messier) for my notes.  Fortunately, on a whim, I had booted up both Cherenkov and my older laptop, Feynman, to install updates, since I hadn't used either in a little while.  So I grabbed Feynman and hooked it up to the scope.  I used it at the Texas Star Party to run my second rig, so it already had all my software and drivers installed, and I keep my Sequence Generator Pro sequences in a OneDrive folder so I can access them on any of my machines.  I tested to make sure that Feynman could indeed control the mount, and then I changed a setting for my camera so that it wouldn't start cooling until the sequence started, since it was definitely not going to be able to reach -15C when it was 25C outside.  I didn't have time to install TeamViewer, so I just had to cross my fingers that it would work.

After the meeting, I had some long conversations with other members about aspects of my talk and other cosmological questions, and I made a mental list of questions I needed to research that people brought up, like how does dark matter interact with black holes?  I also talked about astrophotography, and ended up getting home after 1 AM.  To my dismay, my telescope was in the home position, even though I set the sequence to run until 2 AM.  I went to check out why, and a plate solve had failed on the first target, and the sequence had quit!  I forgot that setting the sequence failure option of re-attempting every x minutes for x hours was not an option of the sequence, but in the options for SGP itself, so when I imported the sequence, that didn't come with it.  So I turned that option on and restarted the sequence to get just 45 minutes of data on M74 before the moon got too high.  Darn, half a night wasted! 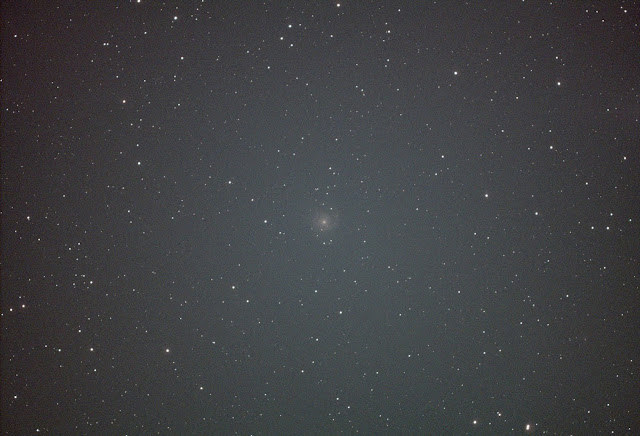 Here's a single shot of M74.  Not much to see yet, but the power of stacking will reveal all!