After Sunday night's episode of The Astro Imaging Channel (which I finally had time to join that night!), I got outside about 8:50 PM (after chit-chatting with some of the members once we were off-air).  It was clear again!  Goodness this is awesome.

Same routine -- took the cover and caps off, connected tablet, powered everything up.  I had to restart PHD again when it wouldn't get images from the guide camera.  I wonder what's up with that.  I disconnect the equipment before I unplug the USB cable!

I figured out while I was catching up on blog posts earlier in the day that the RA and dec coordinates I was grabbing from Cartes du Ciel to put into the location boxes in SequenceGenerator Pro were the "apparent" coordinates, and not the J2000 epoch coordinates.  So I went through and copied the other coordinates instead, hoping that that would fix the weird offset problem.  I found it strange that every target would be offset from actually being centered by the same amount every time if it was a mount error, and that plate solving didn't fix it.  I thought, maybe everything is working right -- but the coordinates are slightly wrong!

Then I had some other software weirdness.  I started the SequenceGenerator Pro sequence, and it started the slew to the Dumbbell Nebula, except that instead of going where it was supposed to, it started slewing west instead, and then down toward the ground!  I stopped the slew and ended the sequence, reset to home position, and tried again.  Same thing!  I was perplexed.  I double-checked the time, date, and coordinates on the telescope and my computer, and they were correct.  I used the scope's hand controller to slew to the Dumbbell, and that worked just fine.  So what was wrong with SGP?  Finally, I disconnected everything in SGP and restarted the program.  When it slewed to the Dumbbell this time, it did it correctly.  Phew!  But also annoying.  The good news is, putting in the J2000 coordinates seemed to have worked -- M27 was smack in the middle of the screen.  Yay!  One more problem solved.

Another thing I did earlier in the day was to investigate how to let the sequence try again if something failed.  The log kept saying "no recovery options selected," so I decided to go find these recovery options.  It didn't take too long to find them, and you can set it to try the sequence again where it left off every X minutes for X minutes.  So I set it to do every 10 minutes for 3 hours.  This way if clouds are passing through, or the plate solve fails, it will try again.  But if the clouds stick around, it will eventually give up.  I may modify this, but we'll see!  Another problem solved.  Getting closer to being able to sleep easy while the sequence is running.

The moon is heading toward full, so I'm going to have to start imaging later and later, then take off a few nights around full moon, and then end earlier and earlier as the moon waxes.  But with it all automated, I can have it start or end at whatever time of the night, and I don't have to do anything.  So glorious!  I'm going to get a lot of imaging done.  Limited range of targets, but a south view still gives me plenty!

In the morning, I checked on how everything went -- it did fail to plate solve a few times, but with the recovery options on, it tried again, and eventually succeeded.  I had a full night of images!

Here's a single frame of M33, the Triangulum Galaxy. 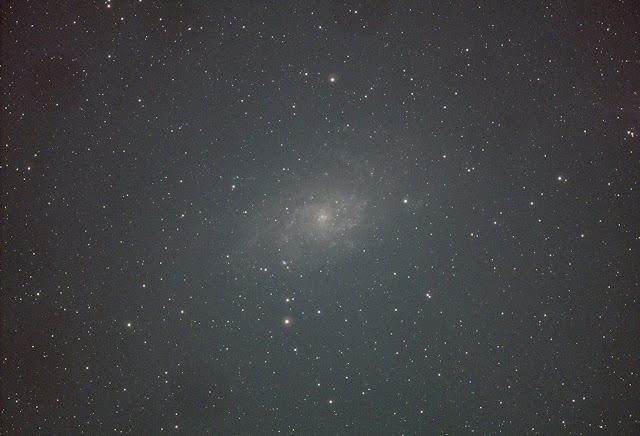 The light pollution is definitely going to be a challenge, but we'll see what I can do with it!  Also, during the TAIC presentation, after much talk about the Advanced Imaging Conference, I went ahead and registered!  San Jose is only about an hour from me in low traffic -- way closer than the plane flight it would have been before!  I'll probably take public transit out there, or maybe stay down there for the weekend, I'm not sure yet.  Really excited to learn some new techniques and talk to other astrophotographers!

Posted by AstronoMolly at 11:12 PM