Last night, my neighborhood held a BBQ block party at a nearby park.  Apparently I'm already famous throughout the neighborhood, lol!  It's a very friendly neighborhood where people talk and hang out together a lot.  It's really exciting to be in such a fun neighborhood!

A little after sunset, it was dark enough for Jupiter and Saturn to pop out, so as I promised my next-door neighbors, I brought out my visual scope -- my 8-inch Celestron Schmidt-Cassegrain on a Celestron NexStar SE alt-az mount.  Jupiter and Saturn were a big hit among the kids and grown-ups alike!  I got to talk a lot of science with my neighbors, which was a lot of fun. 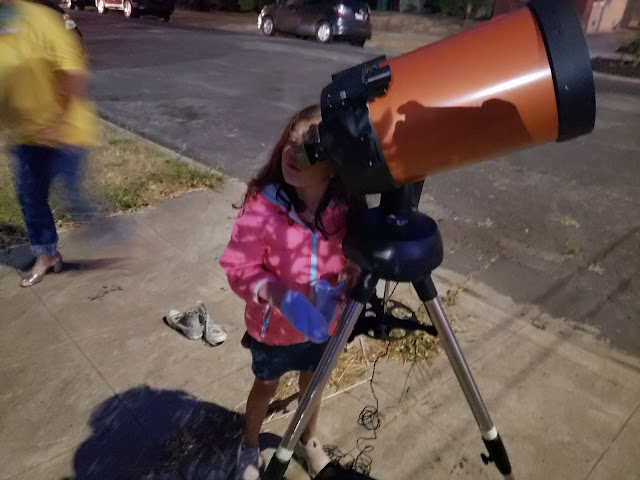 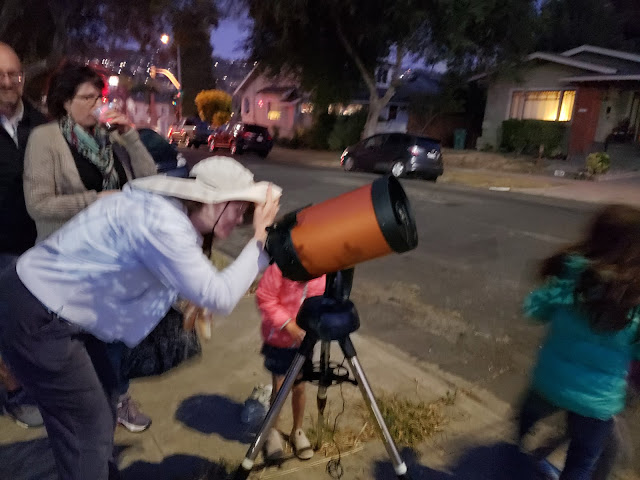 When just a few people were remaining, I was talking to them about the distance to objects, and how we are really looking into the past.  I was hoping to find a galaxy for them to look at, but the only ones bright enough to make it through the fog of light pollution were behind a bunch of trees.  So I went to globular cluster M13 instead, after failing to find M27 Dumbbell Nebula and M57 Ring Nebula.  The globular cluster was pretty visible with direct vision, actually, and they're pretty things to look at and wonder how so many stars can become packed into a small area -- thousands of stars inside of 145 lightyears, making it about 100 times denser than our local stellar neighborhood.  It's also amazing to think about their ages -- the cluster, and many of its stars, are 11.5 billion years old!  It is not well understood how globular clusters form at this point, but we do know that they contain some of the first stars made in the galaxy.

I wound up not having time to swap out my ZWO ASI294MC Pro for my ZWO ASI1600MM Pro, which I'm planing on using with my H-alpha filter while I send my Astronomik CLS light-pollution filter to Oceanside Photo & Telescope for a trade with the Astronomik CLS-CCD filter, which I need to block UV/IR.  My luminance filter from Astronomik does, but I don't have an easy way to incorporate it into my optical system, and I'm going to need a single filter instead of two anyway for when I eventually mount a camera lens on my 294.  It'll just make life easier.  But since I didn't get that done, I did another night of imaging with the 294 on the same sequence I've been using in the latter half of the month.  I removed the Eastern Veil Nebula as a target since I processed it earlier in the day, and since Cocoon Nebula is high enough at nightfall now to be the first target of the evening.  I will shortly be processing that one as well.

I forgot to re-focus the telescope after messing a bit with the focus earlier in the day while I was trying to get the Robofocus to work, but I zoomed in on the stars, and they were in focus after all!  My guess was spot-on :D Crazy! So I went to bed while the sequence ran without incident.

When I copied off the images the next morning, the ones in the latter half of the night were slightly out of focus, so I wound up deleting a bunch again.  Really need to get my RoboFocus working!  I'm just not even sure where to start.

Table of Contents
Posted by AstronoMolly at 12:58 PM