Now that I have processed my M33 image, I decided to replace it with another target or two instead.  So I spent some time that morning re-writing the sequence, and with some help from SkySafari on my phone, added in galaxy M74 and galaxy group Stephan's Quintet in place of M33.

I got home well after dark from my late-evening quantum mechanics class, and headed straight into my backyard through the gate.  I didn't have any issues booting up, and was acquiring images within 10 minutes!  Always a happy moment.

Since the moon was rising at 10:30 PM, I would only get through some M27 Dumbbell Nebula and some Eastern Veil Nebula, but that is still about 2 hours of imaging done, minus some time for slewing and centering.  Looking ahead at the forecast, there are many clear nights ahead!

I got into bed just as the scope started slewing home at 10:45 PM, and on a whim I took a look at SkySafari to see where the moon was anyway.  Of course, it was still very low on the horizon, so I decided that I could probably get away with imaging until the moon was about 15-20 degrees up.  So I added another hour to the sequence end time via TeamViewer on my cell phone controlling my tablet, and restarted the sequence.  Ultimately I ended up getting through the Cocoon Nebula and a little ways into Stephan's Quintet before shutdown.  Woo hoo! 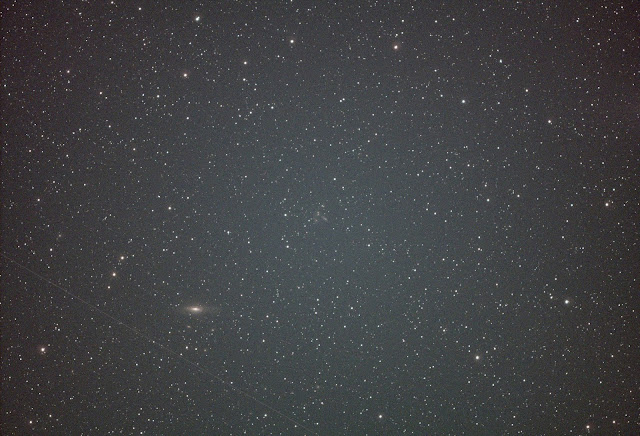 The little group of galaxies of Stephan's Quintet are hard to see in the subframes, but will hopefully come out better in stacking!  The bigger, brighter galaxy down and to the left of the quintet is NGC 7331, which makes a nice addition to the scene.  It lies 47 million lightyears away, in contrast to four of the five galaxies in Stephan's Quintet, which lie 280 million to 320 million lightyears away.  Sliding past NGC 7331 is the line of a dim satellite.

I processed the Dumbbell Nebula last weekend, but forgot to write it up here (the last night of data), so here it is! 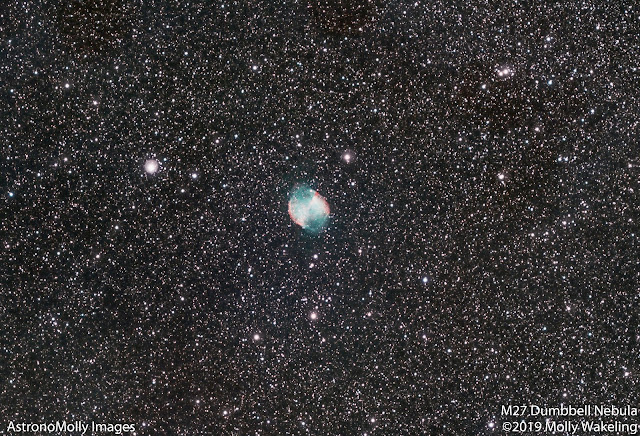 I couldn't get quite as much detail in the core as I was hoping to, but I'm still quite pleased with this image.  It's so light polluted, yet here it is!!

The Dumbbell Nebula is what's known as a planetary nebula -- a misnomer, since they have nothing to do with planets, but looked planet-like in 18th-century telescopes. Planetary nebulae are a late-life stage for many medium-mass stars (and in fact, our own home star will someday turn into one of these too!). These stars are shedding their outer layers of gas down to their core, which then becomes known as a white dwarf. They come in a wide variety of colors, shapes, sizes, and structures, and make fascinating targets in the telescope. The Dumbbell in particular is easy to spot in amateur scopes even under moderate light pollution. It lies about 1,227 lightyears away, and is about two lightyears wide. The red edges are the shock front of the high-speed gas interacting with the interstellar medium (it's expanding at 31 km/s!). The blue glow is from nitrogen and oxygen gas.

Posted by AstronoMolly at 11:23 AM