Yet another clear evening!  This is so great :D Really liking California so far...

I've been trying various modes of transportation to get to school; this time, I tried taking the bus.  The trip there in the early afternoon was fairly quick, but the return trip home took a lot longer, and involved me waiting at a bus stop in the dark for 20 minutes :/ But I eventually made it back to my house, and I went straight to the backyard without even going into the house!  I threw off the cover, plugged in my tablet, connected PHD and SequenceGenerator Pro, started the camera cooler, and then updated the target switch times for their new transit times.  SGP has a handy utility called Planning Tools that, for a given target, will tell you where it will be in the sky when, and by right-clicking and left-clicking on a plot of its trajectory over the course of the night, you can set the end and start times without having to fill them in yourself.  Unfortunately, SGP doesn't have a target catalog built in (at least, not one I've been able to find), but it's really good at parsing a wide variety of input formats for the RA and Dec coordinate boxes.  So I simply went into Cartes du Ciel, searched for the target there, copied the RA and dec coordinates (complete with the "RA:" and "dec" text), and then pasted it into the declination coordinate box in SGP.  It very quickly parsed it into the actual RA and dec coordinates.  Woot!  Then I could use the Planning Tools, and this is how it's been slewing to those targets.

This time around, I didn't reset the sequence, but tried just starting from where it left off (which it saves automatically for you).  This worked!  It started with M27, the first target on the list, even though I don't have start times for any of the targets (just end times).  This will let me keep the frame numbers of each target sequential, instead of having frame1, frame1 (1), frame1 (2), etc, for every night I image.

The plate solver had issues again, however -- it didn't want to solve on the second, verification solve.  (It was doing the first solve just fine).  My wifi driver had died again, but the plate solver was set to the offline Astrometry.net server.  While I was working on this issue, I heard a scratching noise from the back fence.  I turned on my cell phone's flash light, and saw a raccoon peak its reflective eyes at me!  The light didn't seem to scare it much, so I sort of fussed at it, and also kicked the fence.  It would duck down, and then peak back up.  Finally, I grabbed a lemon off my lemon tree and threw it at him!  I missed, but it hit the fence, and I didn't see him again after that.  After watching the fence for a few minutes to see if he'd be back, I went back to my computer to keep working on the plate solve issue.

When I tried it again, it worked, and since PHD was still calibrated from the other night, everything was ready to go.  So I finally went inside to feed the kitties and go to bed.  So nice not to have to stay up!

I've got a lot more data I want to collect before I process any of this, so here's a single frame to tie you over!  A noisy, low signal-to-noise ratio one, but you know the power of stacking by now. 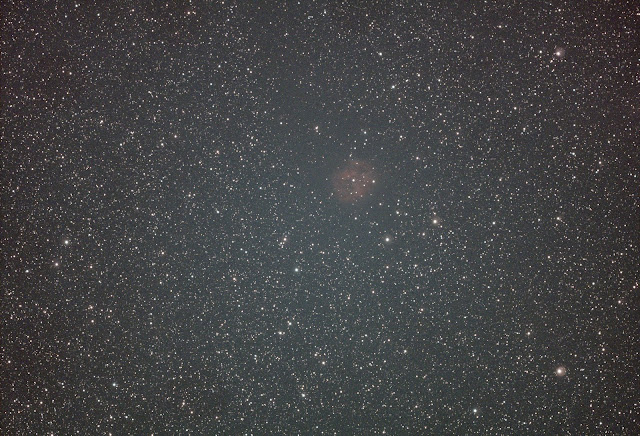 Table of Contents
Posted by AstronoMolly at 6:01 PM