I may come to regret it on Monday, but I did another all-nighter on Saturday night!  I decided to go for a few galaxies this time.  There aren't many galaxies that are large enough to image well on the 5-inch refractor, but M33 and M101 fit the bill.  And it's a happy coincidence to image M101 on my 101st observing trip.

This trip was actually a double-header - I went first to a park and did an astronomy outreach event there with a few other club members.  It looks like there were about 50 or so people who came, a pretty decent turnout.  We looked at the moon, Jupiter, and Saturn mostly, but I also turned my telescope to M31 Andromeda Galaxy, globular cluster M13, M57 Ring Nebula, M27 Dumbbell Nebula, double star Mizar and Alcor, the Wild Duck Cluster, and the Butterfly Cluster for a few intrepid newly-minted observers.  The two open clusters looked particularly gorgeous this evening, as did M27 and M13.  M31 is difficult to view in my 8-inch Schmidt-Cassegrain, even with a 0.63x focal reducer, and especially because of its low altitude at the time.  It wasn't much more than a fuzzy splotch.  Astronomers might like chasing fuzzy splotches, but the public don't tend to find that as exciting, so I picked out some prettier targets.  Even though the moon was out and we weren't far from the city, there were quite a few stars gracing our presence. 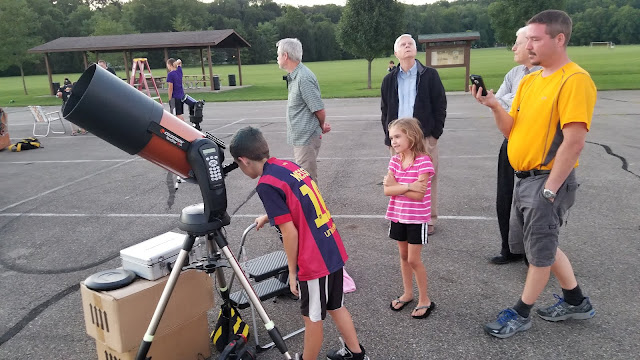 I stuck around until about 11 PM, and then packed up and drove over to the observatory.  I had left everything attached to the memorial scope, so I just needed to open up the dome, turn the power back on, sync on a star, and start imaging.  I decided to start with M101, since other targets I had in mind for the evening weren't rising until later.  I got 14 images on it before it got too low. 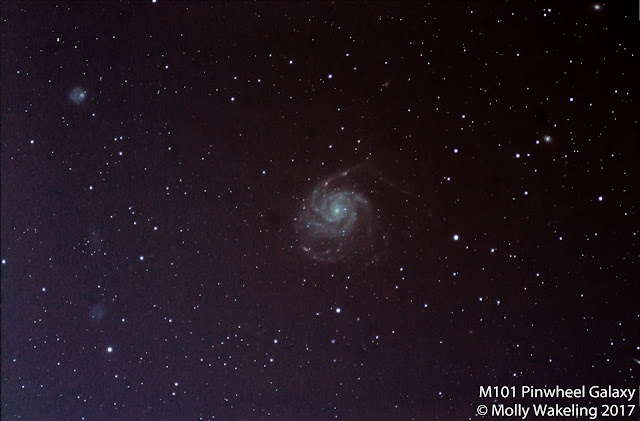 I had some difficulty stacking this one - the noise was like crazy again.  I ended up turning off the background calibration, and I tried auto-adaptive weighted average, kappa sigma clipping, and median kappa sigma clipping, but none really improved the noise that much.  I also tried stacking without the flats.  Ultimately having the background calibration turned off was the most helpful, but I had to keep the image pretty dim in order to keep the noise from becoming too ridiculous.

Around 2 AM, I switched targets to M33.  I'd thought about getting more data on the Helix Nebula, but it wasn't quite as high as I'd like it quite yet, and I didn't have an image of M33 that I was particularly happy with.  This one was noisy too, but not as bad as M101, and I managed to get a decent-looking result (even if it's not quite white-balanced). 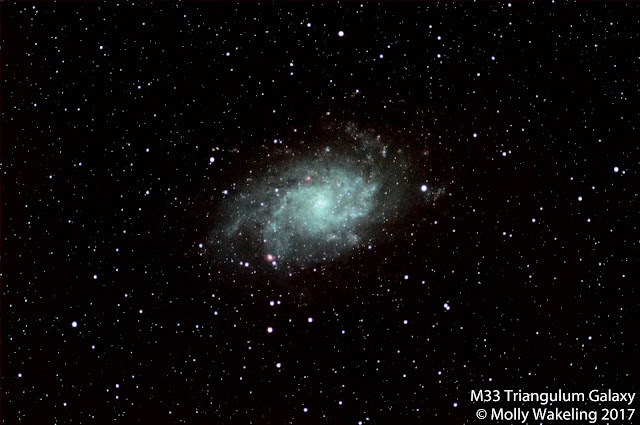 I got a decent amount of the HII regions (the red blotches) as well, woot!  When I was doing some research for including details in my Facebook post, I found out that M33 is actually only 2.4-3 million lightyears away - I knew it was part of the Local Group, but I didn't realize just how close it was.  Neat!

I would have gotten more subframes on M33, but I was tired, and being alone at the observatory all night was starting to get to me.  So I closed up the dome at 3:30 AM and passed out in my sleeping bag on the futon in the warm room again.  In the morning, my haste to get home and avoid all of the bees that were buzzing around and eat some food, in conjunction with my sleep-deprived brain, meant that I accidentally forgot a bunch of stuff there, and had to go back twice!  I was almost out of the park the first time when I remembered that I left my camera bag and tablet in the mini-dome, so I turned around and had to unlock all the locks I'd just locked to get to it.  And then, I was halfway down the drive when I remembered I'd left my accessory bag inside the observatory building, so I had to turn around again and unlock all the locks and contend with the bees.  A gentleman who was walking his dog on the lane was probably very confused.  I'm going to bed early tonight!


Next post: A Super-Duper Primer of Astrophotography Part 9 - Post-Processing in Photoshop

Table of Contents
Posted by AstronoMolly at 2:11 PM