My minion Miqaela and I made it to the Green Bank Star Quest!  After checking in and being shown to the bunkhouse (which I will say is waaaaay nicer digs than the Texas Star Party, haha), we drove down to the observing field in the shadow of the Green Bank Telescope, a football-field-sized radio dish of awesome, and got set up. 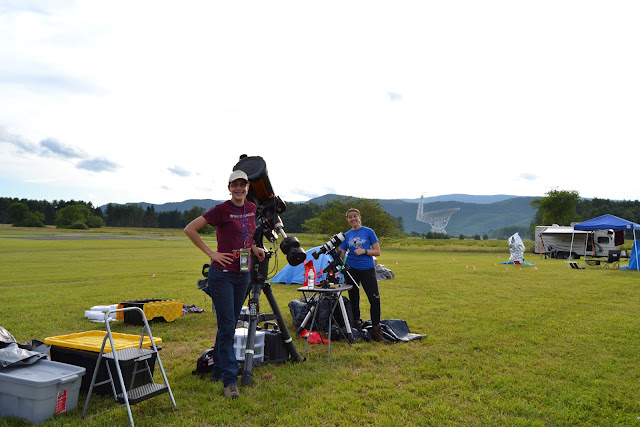 Because of our proximity to the radio dish, all of our devices had to be in airplane mode, but they did allow us to bring cameras and laptops down to the observing field.  Luckily, I already run everything with cables and don't do any wireless triggering, so that wasn't an issue.  We did have to do some power management planning though, since there is no AC power down on the field, besides a barn where they have a couple of outlets that can be used to re-charge things.  I brought my four Nikon batteries, a 7 amp-hour power tank, and a 17 amp-hour power tank I won last year.  Miqaela brought three Nikon batteries and a 7 Ah power tank.  I can run my tablet off any USB port, such as the ones on the power tank or my external cell phone recharger battery, but Miqaela only had a laptop, so we implemented every power-save setting we could find, and kept the lid closed as much as possible.

We had great luck the first night - it was dazzlingly clear!  WOW the sky was incredible.  Especially at zenith - the stars looked so close!  We even found Andromeda naked-eye later that night.

Unfortunately, our equipment was less cooperative than the sky.  I was having some USB issues, likely caused by trying to run 5 USB devices on one USB port (my camera, Miqaela's camera, my guide camera, my telescope, and my digital thermometer), as well as some weird "no response" codes on my hand controller, and I didn't measure north close enough when I set up the tripod during the daytime and ended up having to pick up and rotate the telescope (no easy task when it weighs some 170 lbs!)  This was Miqaela's first attempt at guiding, so we were bound to hit some snags.  We had difficulty even getting her mount to align - her finderscope was broken, and I bent the contact in mine while trying to replace the battery, so she had great difficulty aligning her scope.  Even after she managed to do it, it started having bad gotos, and we had to re-start.  After several attempts, I finally just put in a 40mm eyepiece and got down on my knees and sighted up the tube to align, and I was able to get her aligned, at last.  We got her an Orion 50mm mini guide scope for her Celestron 130 SLT Newtonian telescope, which as a 650mm focal length (the Orion 50mm has a 162mm focal length, and is advertised to be able to guide scopes up to 1500mm long).  However, the mirror is not far enough up in the tube for her to be able to focus her DSLR, so she needs to use a 2x Barlow in order to reach focus.  This makes the effective focal length of her scope 1300mm, which on her Celestron Advanced VX mount turned out to be just beyond its capability to guide.  We finally called it a night on hers.

After getting pointed roughly north, I was attempting to polar align, and realized that the CGE Pro wasn't going to quite be able to make it to 38.5 degrees in altitude (for 38.5 degrees N latitude).  It's got this weird configuration where you have to move the plate with the altitude screw down to a lower position in order to reach altitudes 40-65 degrees.  I had it still set for 10-40 degrees from the Texas Star Party, but the screw reached its tightest position at only 38 degrees.  Luckily, a gentleman and meteorite guru I met at my club's annual symposium, Dave Holden, had a great idea - just put a thick nut on the bottom of it!  This gave me the extra height I needed to polar align.  Woo hoo!   Finally, after midnight, I started imaging my target for the evening - the Crescent Nebula.  I've imaged it twice before, and could see the edge but none of the center, but I was hoping from this dark location, I would be able to see more of the inner portion.  The next day, I realized that I had forgotten to attach the focal reducer!  I was wondering why my subframes were so dim - imaging at f/10 is hard.  But it came out all right anyway!  This was also my first time guiding with the Borg refractor, and the extra 100mm of focal length helped - I was able to go at least 7 minutes, and I didn't go longer only because I didn't have any darks to match.  (Guess I'd better start taking some for star parties!) 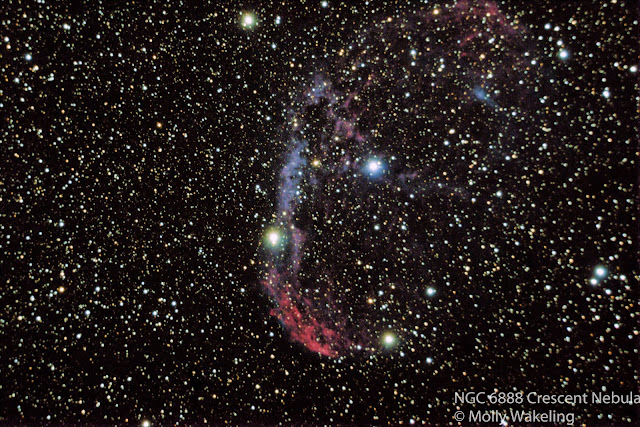 Because I forgot the focal reducer, I also didn't have any flats to match, so I took some the next day.  I took them after I had initially processed it though because I'm impatient, but I ended up actually liking the version with the flats better - the noise wasn't as bad, strangely.  Maybe I need to re-look at how I take my flats.

After an hour and a half, it was time for a meridian flip, but I decided to change targets instead to the Cocoon Nebula.  I took a 5-minute subframe, but couldn't see a single thing - probably because of the lack of focal reducer.  It's mostly a hydrogen alpha nebula, a wavelength that my unmodified DSLR isn't sensitive to at all, so I really need that focal reduction in order to get anything.  I tried the Pinwheel Galaxy too (M33), but it was also super dim.  Then, the 7 Ah battery I was using to power all of my dew heaters (two for my scope and guide scope, one for Miqaela's guide scope, and one for my Nikon D3100 running timelapse) finally died, so I moved my camera up to the Borg, which with its smaller objective and plastic dew shield seems to be more resistant to dew.  I tried for Andromeda, but it was dewing up already too, so then at 4:30 AM I called it a night.  I woke a snoozing Miqaela from the car, we put our tarps over the scopes, and trudged back up the hill to the bunkhouse.  A difficult night, but it was awesome just being under those gorgeous dark skies and watching the Green Bank Telescope move every so often.

Posted by AstronoMolly at 7:05 PM