Getting your target for the evening centered in your eyepiece and focused isn't always as simple as it sounds at first glance.

Target Acquired! - How to frame your shot

It's a multi-step process.  If you just put the name into your goto hand controller, chances are it won't be centered, and you might not be in focus either if you have a reflector, especially a Schmidt-Cassegrain or anything with a big giant mirror.

1. Sync on a nearby star

I have used two kinds of mounts so far - Celestron, and an older Losmandy Gemini II.  I can't speak for all brands, but I think many of them have some kind of Sync feature.  I recommend it - it will firm up the pointing model for that part of the sky, making both the goto and the tracking better.  The Losmandy mount I use is on a pillar planted in the ground, so it is permanently polar aligned, and well enough so that I don't even add alignment stars - I just sync on a star near my target, and go.

Generally, I use my SkySafari app to find a nearby bright star to the object I'm about to image, and I sync on that.  Also, the sync will work better if the star is on the same side of the meridian as your target, so be wary of which star you choose if you are shooting near the meridian.

While you're at a star that is near your target (and on the same side of the meridian), go ahead and use that for focusing.  There are a number of ways to achieve focus.  There are two that I use more frequently: Live View on my camera, and a Bahtinov mask.

Back before I had BackyardNikon, I would go to the bright sync star, turn on my camera's Live View, and zoom in realllllly close.  I would then adjust the focus knob until the star appeared as small as possible.  Not terribly scientific, but it worked well enough.  Unfortunately for SCTs, the focal point is rather broad - for nearly a quarter of a turn, the star will appear to be the same size.

Now that I have BackyardNikon, I use its "Frame & Focus" mode to pull up Live View on my computer, which has crosshairs and a zoom-in section.  When the star is in the center of the zoomed-in section, BackyardNikon will give you a FWHM (full-width half-maximum) reading.  I adjust the focus knob until this is as small as possible, mentally averaging for the seeing conditions.  This has the same problem though where the focal point is still rather broad.

Also, for you Schmidt-Cassegrain owners out there, make sure the last focus knob movement you make is ccw (counter-clockwise) - this is the "up" direction for mirror movement, and will put tension on it against gravity, which will hold it more steady.

I use Live View for this too, but the Bahtinov Mask is a little more accurate.  It's basically a piece of plastic with lines forming a pattern that will cause a spiky diffraction pattern at the eyepiece/in the camera.  When the central spot is in the middle of all of the spikes, then you are in focus. 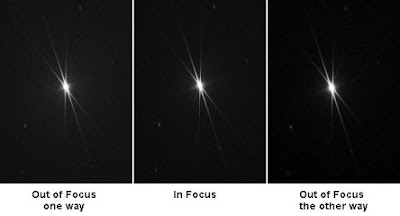 I'm sure there are other tools out there, I just haven't used them.  Focusing an SCT for imaging is kind of a crapshoot anyway, at least in my experience - my stars never turn out as pointlike as they do in a refractor. Stars will always appear softer in an SCT because of the large central obstruction (the secondary mirror).

I think this feature is unique to Celestron mounts, but I may be wrong.  If you have a Celestron mount with relatively recent firmware on the hand controller, definitely use this feature!  It's one of the main menu options under the Menu key.

Basically, you tell it which object you want to slew to (using any of the same databases already available on the HC), and it will search its catalog for a nearby bright star.  You select one (choose one on the same side of the meridian), slew to it, and center it in your camera (this is where the crosshairs in BackyardNikon come in handy).  Then hit Enter, and it will slew back to the object - which will be nearly perfectly centered.

To double-check that the target is where I want it in the frame, I'll usually take some shorter-exposure test shots.  If it's a relatively bright object, it'll show up in a short exposure, say 30 seconds (and sometimes in the viewfinder, which I use surprisingly often to center things).  If it's rather dim, then you can at least see some of the more prominent stars in/around the object, and use those plus your favorite astronomy app to line things up.

Plate solving is kind of a neat concept - the mount tells the program where it thinks it's pointing, then the program uses your image acquisition program to take a short exposure, and then it uses a downloaded database to plate-solve the image and figure out which stars you are looking at.  It then will use your ASCOM driver (the same as needed for guiding) to slew your telescope a little bit, after which it will take another image and plate-solve it, and this process continues until the reference stars are where they should be for your target to be centered.  I tried AstroTortilla for this once, but it has a bit of a steep learning curve, and I'm pretty good now at centering my targets without it.  But it can be awesome for automating long imaging sessions.  I'll probably check it out at some point, and then write up a tutorial for it.

Once your object is centered, you're ready to image!
Don't forget to re-focus your scope whenever you do a meridian flip.  Even refractor users, unless you have a locking focuser, it can slip, and even with a locking focuser, your camera could adjust slightly as the telescope slews around.  It's better to take a minute to re-focus than to waste hours of hard work on un-focused images!


Next in series: A Super-Duper Primer of Astrophotography Part 8 - Post-Processing with Freeware

Table of Contents
Posted by AstronoMolly at 7:21 PM