So you've got your camera attached to the telescope.  Now what?
First, let's talk about hitting that shutter button.

Most DSLRs I know of have a built-in exposure time maximum of 30 seconds.  This is a good place to start.  However, you will quickly discover that the act of hitting the button causes your telescope to vibrate quite a lot, which will show up in your images.  Some manufacturers and models have a mirror-lock mode, which helps, but alas, none of the low-to-mid-range Nikons I've used do, so if yours doesn't, you'll need some options.  Also, you will eventually want to take images longer than 30 seconds.

I started out with a wireless remote shutter, something I still use frequently for DSLR selfies and grab-and-go widefield astrophotography (aka, putting the camera on a tripod).  It allowed me to hit the shutter button from a distance and not touch the camera, which kept the vibration to a minimum.
Pros: Less vibration from your finger
Cons: You're responsible for remembering to hit it every 30 seconds for hours on end.

While my Nikon D3100 did not support the use of an intervalometer, my later purchase of a D5300 did (which I got solely because I needed greater control over bulb mode and other camera functions from a computer).  An intervalometer is basically a little programmable plug-in remote that triggers the camera at intervals you set.  I got one like this - although note that different manufacturers (Canon, Nikon, etc) will have different connectors, so make sure you get one for your camera brand.  You can set it to any time, even up to hours, for the exposure time, set a delay (I usually do 5-10 seconds delay to let the telescope vibrate itself still after I let go of it), set a pause between frames (a few seconds to allow the giant RAW image to save to memory), and a number of frames.
Pros: Automation, no computer required.  Batteries last forever if you don't use the backlight.
Cons: Dangles from the camera, can only set one exposure length at a time

One of the best computer purchases I have made is my Microsoft Surface 3 tablet.  It's small, powerful, has a very long battery life, has a full-size USB port, and charges via micro-USB (meaning I can charge it from a lithium-ion battery out on the observing field when there's no AC wall power).  I now use it to control all of my equipment - camera, guide camera, telescope, and temperature probe (more on all these things later).  I have a four-port USB hub to plug everything into.  I started with using digiCamControl, a piece of freeware that controls many kinds of DSLRs via USB cable, and looks nice to boot (if a little buggy sometimes).  (A quick note here: the Nikon D3100, since it's an entry-level camera, does not have a released SDK from Nikon, which in short means that there is no program out there that can control its Bulb mode. Believe me, I've looked!  This is why I upgraded to the Nikon D5300).  I later paid $50 for BackyardNikon (there's a Canon version called BackyardEOS), which gives me a great deal of control over the camera, lets me use Live View on my tablet screen, I can program a sequence of images (great for taking dark frames all night - more on that later), and much more.
Pros: Much more control over camera functions and your telescope
Cons: Laptops can be cumbersome in the field, and non-tablet laptops have short battery lives and are more susceptible to the effects of dew, heat, cold, etc.

If you're new to DSLR photography, all of the available settings may be overwhelming.  It can be helpful to learn how to use a DSLR in daytime photography first so that you get a feeling for what all of the settings do without wasting precious clear night hours.  But let me give you a breakdown of the settings.

I cannot emphasize this enough.  Even when I'm acquiring images, I have it save to both my computer and my camera's memory card.  I upload my data as soon as I can when I get home to my main computer, and then I backup my entire Astrophotography hard drive to two other drives - one internal, and one external.  I cannot imagine how devastated I would feel if my hard drive crashed and I lost all those hours of hard work.  I keep the external backup drive in a fireproof and waterproof safe.  (This is serious business.)

Shoot in the raw.

Always set your camera to take RAW images for astrophotography.  It is an uncompressed format that preserves every pixel's worth of data, plus much more (you can adjust color temperature, exposure, and more in Photoshop and get back details even of washed-out or underexposed parts of a picture).  Get yourself a big hard drive though - these files are as big as the number of megapixels on your camera (for my D5300, these files are 25 MB in size apiece for the 24 MP that camera has - and it adds up fast!).

Not only will you need your image files for processing, but also darks, flats, and biases, plus a folder for your final images (more on calibration images later).  Here's my folder structure:
Astrophogoraphy drive
-> Stacked Images
-> Target Name (ex: M42 Orion Nebula)
-> Attempt # (ex: Orion_5)
-> Image type folders (lights, darks, biases, flats, finals)
My final images are named first my object, then attempt, then version out of the stacking program, then version out of the post-processing program.  For example, Orion_5_1_2 would be my 5th attempt at the Orion Nebula, first version I saved out of DeepSkyStacker, and the second I saved out of Photoshop.  This way, I can easily track back to what the camera settings, telescope configuration, etc were for that image, should a copy wind up in another folder (like the one I keep on my Dropbox to show off to people).

I am a scientist, so writing down details of my work is very important.  In every Finals folder for every attempt on every target, I have a standardized text file that includes all of the information about how the image was acquired.  Here is an example: 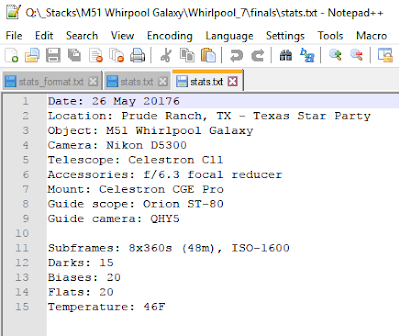 I realized later the typo in the year.  Or am I just living in the future???
#TooLazyToFixIt

Now, this doesn't capture all the settings I use in DSS or Photoshop, unfortunately - there are too many things to list.  But getting the configuration, number of subframes, ISO, temperature, etc. is important, and is what AstroBin asks for when uploading photos.

In addition to these technical notes, I also have kept a log since Day 1 of owning a telescope, for which I am eternally grateful.  Some entries are more detailed than others (as you'll discover by reading them on this blog), but not only is it neat to go back and look at how I used to do things and what I used to not know, but it's a very useful tool for cross-referencing data and getting a qualitative glimpse at weather conditions, telescope performance, etc, that affects my images.  It's also fun to re-live the moments I first saw or captured something amazing, like the first time I imaged the Orion Nebula, or the first time I looked at Saturn.  Many visual observers keep logs of what they have observed and sketches and notes about the object - astrophotographers should too.

Next in series: A Super-Duper Primer of Astrophotography Part 5 - Calibration Frames

Posted by AstronoMolly at 7:16 PM