It's a weeknight, Miqaela has "the bug," and of course I can never resist a clear night!  So I picked her up and we got out to the observatory at about 9:30 PM.  I decided to give piggyback imaging a try at the observatory - I figured the light pollution would be too much for short focal lengths, but I thought I'd try at least.  I mounted my D5300 atop the Vixen scope in the memorial dome, and attached a 70-300mm lens to it (also given to me by a club member last year).  At first, I couldn't see Deneb in the live view so I could focus (I had the focal length at ~200mm to try and capture the whole Veil Nebula), but the camera was up too high and was too far forward on the scope for me to use the viewfinder, so I ran inside and grabbed a step stool.  I saw where it was in the viewfinder, and then at last I was able to find it in the live view on my computer as a tiny dim spec.  I focused as best as I could, and then moved over the short distance to the Veil Nebula and took some 3-minute subframes.  They were pretty bright with light pollution, and I couldn't see the nebula at all.  So I scrapped that plan and plugged the D5300 into the Vixen and got guiding set up quickly.

Meanwhile, Miqaela got her scope set up and guiding pretty much without my help.  Woot! She borrowed my Orion ST-80 again.  However, her camera wasn't completely fastened into the eyepiece tube, so it slid out of focus a few times, and re-focusing at such a short focal length is difficult, since the stars always appear small and dim.  Between this and my attempts to piggyback, neither one of us started acquiring images until well after 11 PM.  Since it was a week night, my plan was to have us pack up around 12:30 AM, so that didn't leave us much time.

I managed to grab 14x7-minute subframes on the Western Veil Nebula, which I haven't imaged before.  The subs looked very promising, but the first iteration out of DeepSkyStacker came out very noisy, so I ditched the flats and tried again (I don't have an exact position marked on the scope, since I don't own it, so I just align the accessory shoe with the piggyback mount on top of the telescope tube, but it is inexact).  Maybe I can mark it with tape or something removable.  The stack without flats came out a little cleaner, but not much.  Trying out different debayering settings and stacking settings was still giving me very noisy images, although using "Auto Adaptive Weighted Average" in the "Lights" tab of the stacking parameters window seemed to do better, and I added the flats back in. 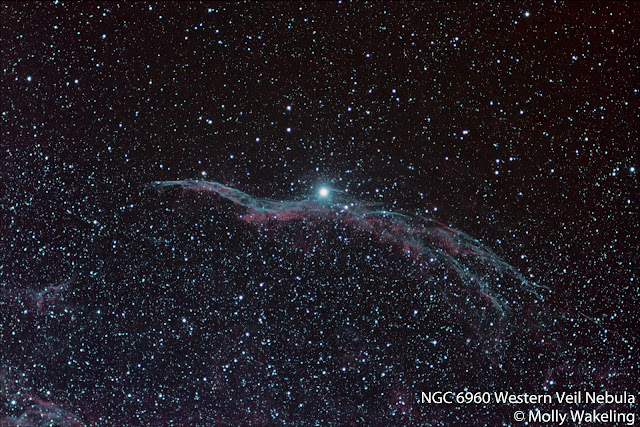 Also, guiding was so good on the memorial scope that I may need to start dithering!  Dithering is where you can have PHD or your image capture program (through PHD) move the telescope a pixel or two every so many frames so that you don't end up with one of the camera's hot pixels on the same spot in every frame.  Usually periodic tracking error pretty much takes care of this for me (even when I guide it shows up still, just more slowly), but guiding was so tight that my images barely moved, if they moved at all!

While my images were going, I also ran around with my D3100 and nabbed some Milky Way images, as well as the  Big Dipper.  One of the Green Bank attendees pointed out the "Green Bank Telescope" asterism in Ursa Major, and I was hoping to make a picture to show that.  I'm still figuring out how to make constellation stars stand out, so I'll post it here when I finish it.

We did indeed pack up at 12:30 AM and I got to bed by 2:15 AM.  Thank goodness for cheap office coffee to help me get through the afternoon!

Miqaela's image came out lacking the red, but that's to be expected from an achromatic refractor, it looks like.  We didn't quite get the field-of-view moved up high enough to see the Pickering region in between the Eastern and Western Veil Nebulae, but you can kind of see some of it in the lower parts of both my and her images.  Still pretty neat what you can capture with a cheap refractor!  And she got some pretty neat star colors. 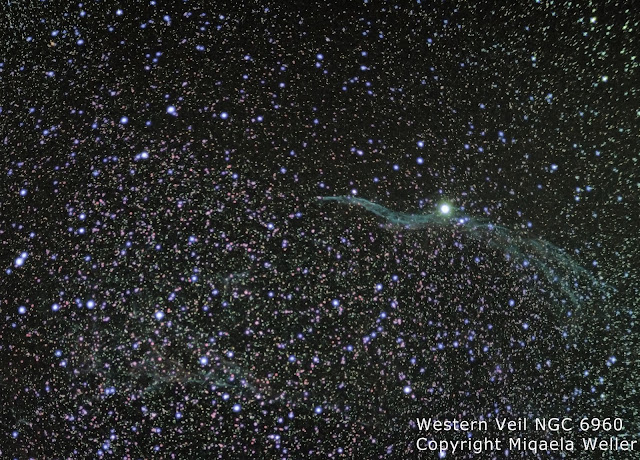 There was also a very nice ISS pass - almost straight overhead!  As well as an Iridium flare.  I misjudged where the flare was going to occur, so I only caught it in the side of the frame (and out of focus). 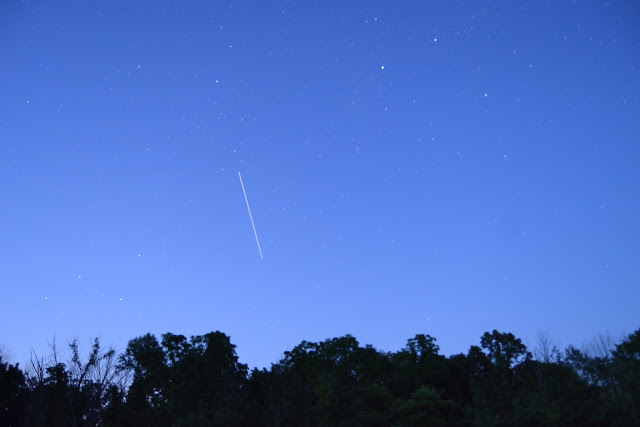 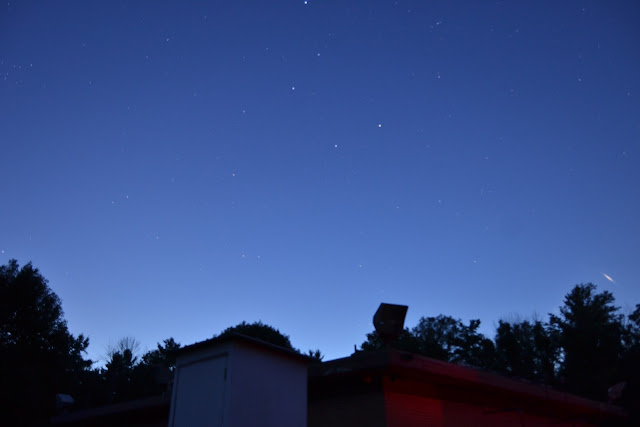 A short but productive evening!

Table of Contents
Posted by AstronoMolly at 5:52 PM