The first part of the evening was the Camper Stargaze.  The club hosts these throughout the summer in the parking lot next to the playground, and lots of club members come out and set up gear to show off the night sky to both campers at the park and people who hear about the event through Facebook/word-of-mouth/etc.  Last month’s event apparently had 250-300 people, which is the biggest crowd we’ve yet had!  We think people are getting more interested because of the upcoming solar eclipse.  Last night didn’t have quite that number, but I heard it was over 150.  There were a lot of club members present with their gear, so it didn’t feel like it was that many – I maybe had 20 people total come by.  We looked at Jupiter, M51, and M13.  M51 was difficult to see – I could make out the two cores, but some of the guests had trouble, but M13 was very nice, especially with averted vision.  It was right at zenith, but luckily I had the telescope far enough forward in the mount that the star diagonal didn’t hit the mount like it usually does that high.  Jupiter looked pretty good – I put on the 13mm eyepiece, which I think I need to clean after so many kids’ faces smudging it up.  But the view was still nice, you could see the two main cloud bands and its four Galilean moons.  Callisto was just above the planet, very close to it.  I had several little kids come through, and there’s always one who is very knowledgeable, and it’s fun to watch them show off.  This time it was a young boy, maybe 5 or 6, who could name all of the planets in order.  The family of one of my Girl Scouts came out as well, and I left the event at the time it was set to end, although there were still people there, in order to show them the observatory as part of earning the Sky badge.  It killed me to leave when people were still looking through scopes, but I also had an ulterior motive: I wanted to do some imaging before the moon came up!  We looked at a few more things in the memorial scope: the Lagoon Nebula and the Andromeda Galaxy.  The 26mm 2-inch eyepiece I grabbed was just too much FOV though, so there wasn’t much detail on anything.
After doing a tour of the observatory and the dome where I image, my Girl Scout and her family took off, and I got busy getting set up on the memorial scope.  I only had about an hour and a half though until the moon was up, so I scrapped my plans for imaging the Veil Nebula and picked an easier target instead: the Trifid Nebula.  I got about 14 progressively brighter 6-minute frames before I called it quits; my blue histogram peak was about to fall off the right edge.  I lost one of my frames when the mount did the thing again like on 4th of July weekend, where the hand controller acted like I was pressing and holding the menu key, and it looks like it stopped tracking or something for a bit, since PHD showed some huge spikes trying to compensate.  I hit the menu key a few times, and a few other buttons, and then let it sit for a moment, and it stopped and continued tracking where it left off.  Night saved!  I hope this doesn’t keep happening because a replacement hand controller for the Losmandy Gemini is expensive…


Anyways, here’s the image!  Light pollution removal algorithms are truly magical, I have decided.  I think I’ll use this one for my Photoshop tutorial. 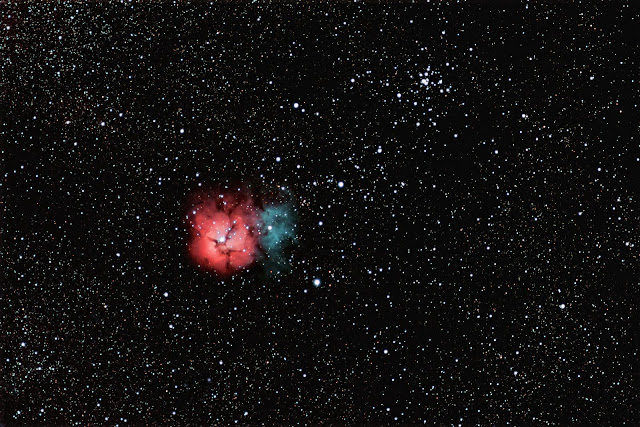 Open cluster M21 is in there too – I was going to center M20, but then decided it’d be nice to have the cluster there as well.  I’m also quite pleased with the lovely shade of pink-red that came out.  I didn’t adjust that color at all besides white-balancing use the black point.
I left the observatory around 2:30 AM, and got to bed about 3:15 AM.  Unless it clears up Monday night, my next log entry will be from the Green Bank Star Quest!

Table of Contents
Posted by AstronoMolly at 3:19 PM