I put in a bunch of raffle tickets for a Canon T5i, but didn't win.  Darn!  Astrophotographer Brent Maynard gave several talks on astrophotography, and talked about the Magic Lantern tool for Canons, which lets you access a great deal of the camera's settings, and he was offering to modify it for the winner.  That would have been awesome!

It was cloudy again that night, but this time it was due to a bit thunderstorm rolling through.  After the raffle, Miqaela and I drove down to the observing field to batten down the hatches on our gear, which we didn't end up having a chance to put away earlier that day, and I grabbed my camera and tripod while I was down there.  The lightning was awesome, but I missed the bulk of it by the time we got back up to the bunkhouse, where I set up my camera to try and capture some lightning images.  There was a massive strike nearby that shook the bunkhouse!  Out of some 1,300 frames I took facing different directions as the storm moved, I managed to get only two with lightning, and only one in raw format.  I touched up both of them anyway - check it out! 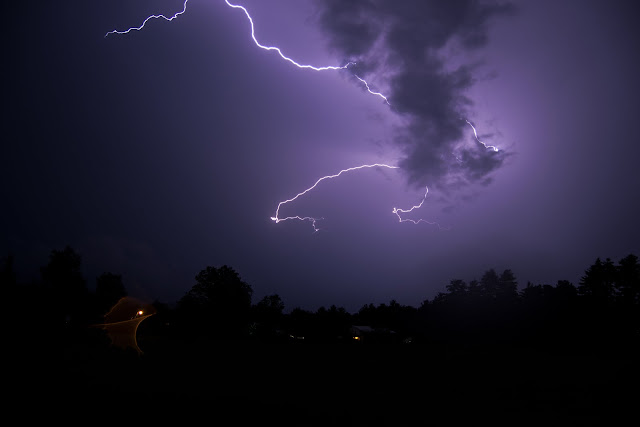 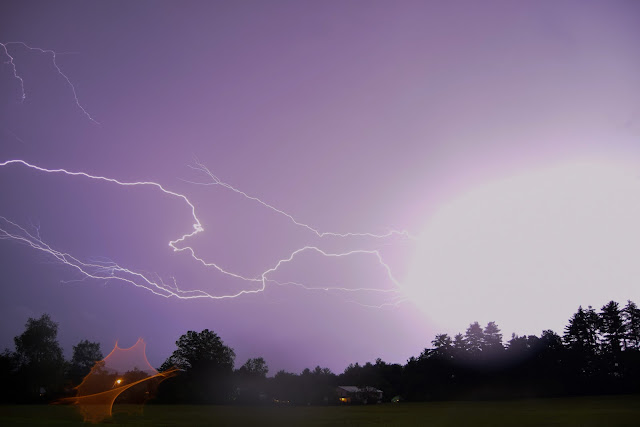 The orange glow around the light on the lower left is from a water droplet on the lens.

I wish I'd grabbed my camera sooner, I could have gotten some lightning shots with the Green Bank Telescope in the background!

Needless to say, no observing was done that night.  Our gear survived the storm, and we packed up Sunday morning and headed home.  We had a great time!  Lots of awesome talks, met a lot of new people, and saw a few friends we'd met previously at other star parties and events.

Here's a timelapse I made over the course of the weekend - I didn't get as much as I'd hoped to get, but still kind of cool!


And, also, a timelapse of us tearing our equipment down also came out super cool.

Table of Contents
Posted by AstronoMolly at 7:16 AM