A Super-Duper Primer of Astrophotography Part 1 - My First Telescope

I got started with astrophotography just by thinking, "Hey, I'll bet there's a way to attach my camera to my telescope and try to take some pictures of this really cool stuff."  Well, there was!  But I definitely picked probably the absolutely hardest and most difficult way to do it.

My First Set of Gear

My first six months of observational astronomy were with that 8-inch Schmidt-Cassegrain on an alt-az mount.  These together are great for visual observing - large aperture in a relatively lightweight and small package (it didn't seem to small at the time, but compared to what I have now, it's absolutely portable!) - but are not exactly meant for astrophotography.  My camera was a Nikon D3100, an entry-level DSLR that at least has the minimum requirement for AP: Bulb mode, and manual settings for ISO, white balance, etc.

Schmidt-Cassegrain reflectors are difficult to image through due to their long focal length.  My C8 has a focal length of 2032 mm (that's over 6-1/2 feet folded up into a footlong tube!) and an aperture of 203.2 mm, giving a focal ratio of f/10.  If you are not a photographer or astronomer, then I will tell you that that is a rather high ratio, which means rather dim images.  (Focal ratio is the focal length divided by the aperture).  For astrophotography, this means that you have to image an object much longer in order to get the same amount of light in each pixel as a lower f-ratio telescope.  Having such a long focal length does have one upshot though - small field-of-view (FOV).  Well, this is an upshot if you like looking at galaxies and planetary nebulae, at least.

Alt-az mounts are lightweight and easy to set up - no polar alignment or counterweight-balancing required.  You just throw it on the tripod, give it two or three stars, your location, and the time of day, and you're off to the races.  Alt-az mounts do not follow the motion of the sky, however - they move up-down, left-right, with relation to the Earth.  They will of course track something across the sky quite readily, but it has to move both axes to do it, and over the course of the evening, the object you're observing will appear to rotate - this is called field rotation.  The effect is negligible when doing visual observing, but becomes readily apparent when taking images - for example, this uncropped image of M42, the Great Nebula of Orion. 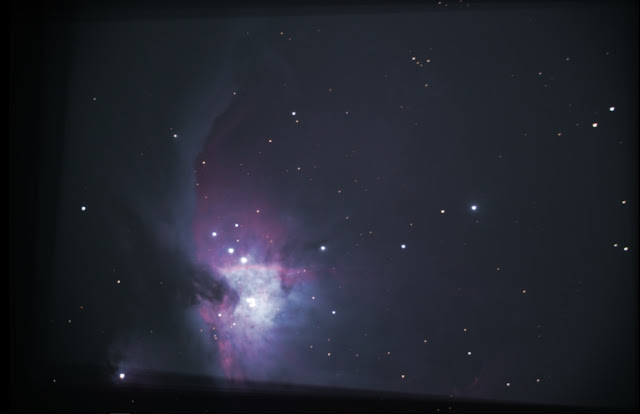 This is a stacked image (more on that later), and you can see how each successive frame is rotated.  Each frame is only 20-30 seconds long, and it doesn't take long to start seeing the effect.  This is one reason why you are limited to very short exposures (30 seconds or less) on an alt-az mount.

DSLRs have a number of limitations as well (although I have gotten some fantastic images with mine, I could be doing even more amazing things if I had a CCD camera).  These include:
Now, it would seem that I am painting a pretty grim picture here.  And if I knew all of these things when I started, I might have given up!  But in spite of all of these things that make imaging with the equipment I had difficult, I nonetheless managed to acquire some good images - with some help from digital image processing.  But that topic deserves several posts dedicated to it, so keep reading!

I have discovered, however, that you don't necessarily have to break the bank to get high-quality astro images on fancy equipment.  I've got another post coming up about a relatively cheap setup that I've gotten some fantastic images out of so far as well.  Stay tuned! 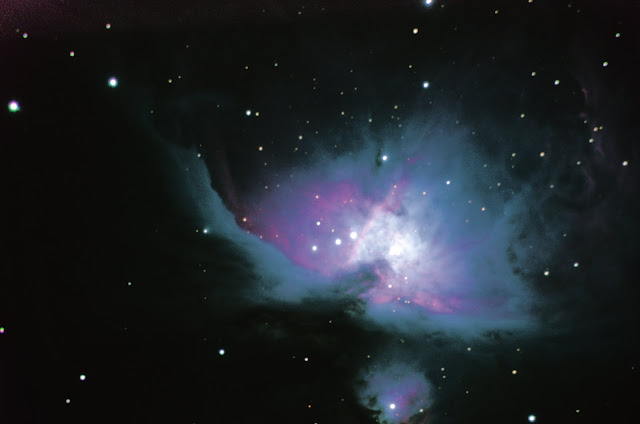 Next in series: A Super-Duper Primer of Astrophotography Part 2 - What Is Stacking?

Table of Contents
Posted by AstronoMolly at 3:50 PM