There is lots of great freeware out there.  And I'm all about using freeware wherever I can.  Sometimes I even donate to the makers.  But there is a reason that paid software exists, and in the case of Photoshop, there are a lot of advantages for shelling out the extra dough.  I pay $10.66 a month to get some high-quality imaging processing tools at my disposal (and better yet, the license gives me 2 computers to use it on, so I can put a copy on my laptop and process while I'm at star parties, or sometimes when I'm at work).

I have Adobe Photoshop CC 2017, with Camera Raw Filter (which is like the best thing ever.)  It has a ton of tools, and I've only scratched the surface of what can be done in image processing software - some people I've met spend hours on their astro images.  I spend maybe like 20 minutes doing the post-processing.  I'm not saying that's the way it should be done, but that's about as much as I know how to do at this point!  So here's the rundown of my favorite tools.  I'll walk through processing the Rosette Nebula, since it's one of my favorite images, and a great example of what can be done with processing.

I mostly use Photoshop's built-in tools, but Noel Carboni developed a great set of actions for Photoshop that does some terrific things.  It's only $20, and I was able to copy the files over from my desktop to my laptop so that my laptop could have them too.  Check them out here.

The Nexus of Science and Art

There is no "right" way to process your images.  I'm going to walk through what I usually do and a variety of tools at your disposal, but this is by no means an instruction manual.  Astrophotography is where art and science meet, and no two images of the same object are exactly alike!  So do it your way.

Many astrophotographers I've met or seen videos online of take the unprocessed image out of DeepSkyStacker (hitting the "Embed" button instead of the "Apply" button in DSS when saving the final image) and stretch it themselves in Photoshop.  I haven't really done this, and the few times I've tried were terrible, so I just let DSS do the stretching.  For the most part, I think it does a good job.  It's also a lot easier to white balance in DSS when you can visually move the RGB curves on top of each other.  (See my stacking tutorial for information on this).  So I'll skip the histogram stretching, and we'll start with the image I left off with in the stacking tutorial post of the Rosette Nebula. 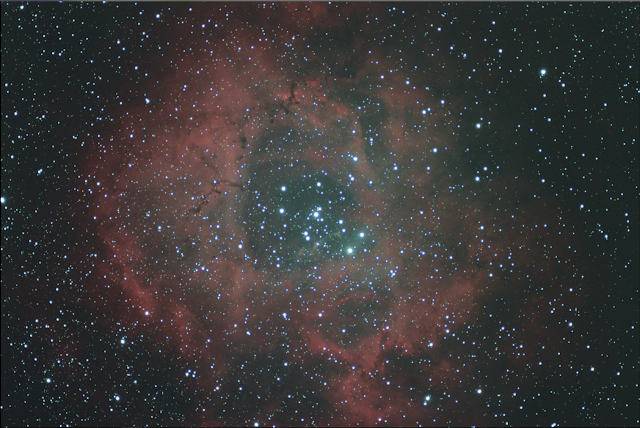 First, import into Photoshop (the TIFF) - I usually just click and drag, but you can also go to File -> Open.

The first thing I usually do is try Photoshop's "Auto" tools, under the Image menu.  There is Auto Tone, Auto Contrast, and Auto Color.  Sometimes these work great, but sometimes they make the colors funky, or blow out the cores of galaxies, or make the noise level go through the roof.  You can always hit Ctrl+Z to undo.  In this case, they worked rather well. 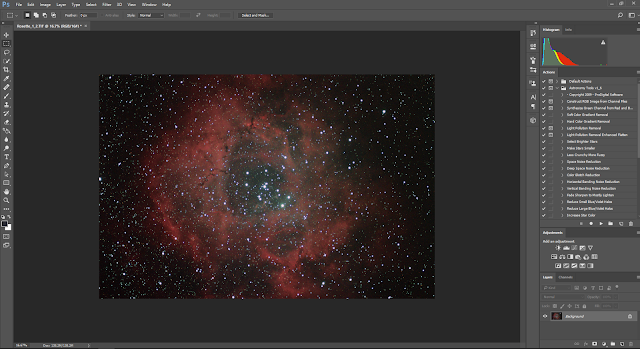 My next stop is the Curves window, which you can access either by going to Image -> Adjustments -> Curves, or using the shortcut Ctrl+M.  You will see a window with a histogram and a luminance line.  Since the Auto tools did a good job, my histogram is already pulled all the way over to the left.  Sometimes, though, especially when your light pollution is high, the background can still have a lot of light - this will show up as a gap between the left side of the histogram plot and the peak that represents your data.  Take the dot at the bottom left corner of the diagonal line and drag it to the right.  Go far enough to reduce your background light, but not so far that you start losing the dim details of your DSO.

Next, you can increase the brightness of your DSO by clicking about two-thirds of the way up the diagonal line or so and dragging it up.  Don't overdo it, but this can help bring out dim objects.

I like to click "OK" between actions - that way, it's easier to undo them one by one instead of undoing them all at once if you decide you don't like it.  The next thing to do here is to set your black point - I usually only do this if the white balance still isn't quite there.  You can do it by clicking on the leftmost eyedropper (just to the right of the "Input" box), and then clicking on a black area of your picture.  You might have to try different places because a pixel that appears black could really be a colored noise pixel, in which case your white balance could get very weird.

In addition to adjusting the master histogram, you can adjust the histogram for each channel by clicking on the box next to "Channel" and choosing Red, Green, or Blue.  I find this helpful when my background is more reddish or greenish or blueish, or when I need to bump up the red in a given object because unmodified DSLRs are not great at imaging red.

Feel free to mess around here until you are satisfied.  You can always undo actions by going to Edit -> Step Backward, or clicking on the History button (see below screenshot).

At this point, I'll apply some of those astronomy tools I mentioned from Carboni.  The 5-inch refractor I frequently image on is not an apochromatic refractor, but a neo-achromat - it has less chromatic aberration, but it's not entirely corrected.  So my stars will often have little blue-violet halos around them.  Not to worry, there's a tool for that: the "Reduce Small Blue/Violet Halos" tool.  Works like a charm, and so far I haven't seen it have any affect on the rest of the image.  To run a tool, click on it, and then click the "Play" triangle button just below.

For images with a lot of light pollution, I'll usually run the "Light Pollution Removal" tool next.  The readme that comes with the toolkit explains how to do this, but I'll show you here too because I'm feeling generous.  After you hit the Play button, it will think for a bit, and then a "Dust & Scratches" dialog window will appear that will make your image look very fuzzy.  Not to worry, it'll return to normal once you're done.  Slide the "Radius" slider until the largest stars just disappear, then click OK. 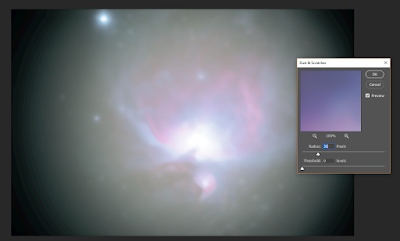 It'll think some more, and then present you with a familiar window - the Curves window.  Click on the leftmost eyedropper, the "Set black point" one, and click on a place in the picture with the most light pollution.  You might need to click around until most of the light pollution is gone, but none of the DSO.  Then click OK again.  Once it's done thinking, you should have an image with a nice dark background!  The white balance might be off, so run the Curves tool again with the "set black point" eyedropper to adjust.

There are lots of other tools here - give them a try!  The documentation with the toolkit explains them pretty well, and there is more explanation + examples on the website.

If I come to a point along the way with a good-looking image, I'll save it, and then keep editing.  Then, when I'm all done, I'll pick my favorite iteration.  Sometimes, it's the one with less editing done that ends up being the winner.

This is probably my favorite part of Photoshop!  It's a fantastic tool for editing raw daytime images, but you can also edit JPGs and TIFs and whatever else with it too.  It's under Filter -> Camera Raw Filter, or the shortcut is Ctrl + Shift + A. 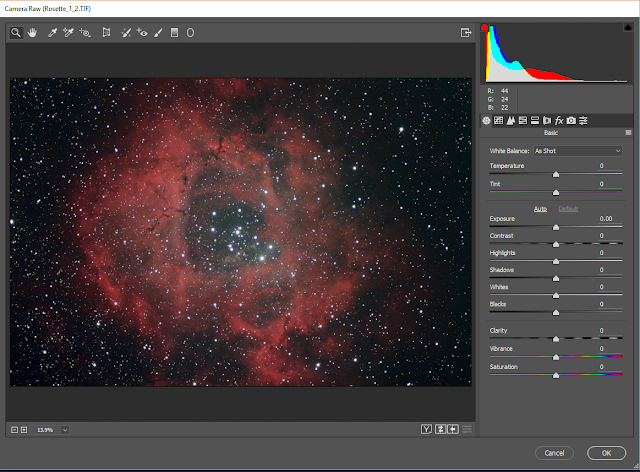 If you use a light pollution filter on a galaxy, this is a good place to adjust the white balance by adjusting the "Temperature" and "Tint" sliders.  I usually also increase the contrast a bit, lower the blacks (which basically chops off the left part of your histogram - you can lose some faint detail here, but gain a nice black background.  Try to find some middle ground), and increase the saturation.  Mess around with the sliders until you get something you like.  Don't go too crazy - it's easy to introduce noise or lose detail by going too far with any of the sliders.

Under the histogram, there are a series of tabs marked with icons.  The first tab is the one shown in the above screenshot, with the basic adjustments.  The second tab is just like the Curves tool, where you can adjust the luminance line for all channels or each individual color channel.  You can also select Parametric instead of Point and adjust each section of the histogram independently - Highlights, Lights, Darks, and Shadows.  It gives you a lot of control.

The third tab is probably my favorite - it has an excellent noise-reduction algorithm.  I never use the one under Filter -> Noise because I don't think it works as well.  This one is fantastic.  There are two sliders you'll focus on - Color and Luminance.  Start by zooming in - I usually go to 100%.  The tutorial I used to learn about this tool said to put color nearish the middle (I never see it do much on its own), and then move the Luminance slider up far enough to reduce the noise, but not so far as to start losing detail or get weird artifacts.

So that's about all I usually do for my typical astrophotos.  Sometimes they require some special care if the noise profiles are particularly high, or they are resisting being white-balanced, etc.  But these are the basics!  Definitely explore the plethora of other features in Photoshop, and hit up all of those internet tutorials.  And then enjoy your gorgeous photos!


Next in Series: A Super-Duper Primer of Astrophotography Part 10 - It Only Takes a Camera!

Table of Contents
Posted by AstronoMolly at 2:44 PM