Since it’s 4th of July Weekend, I decided to camp out there, even though the moon was going to limit how much imaging I could do.  I set up my tent as soon as I got there and opened up the memorial dome to let the heat out.  I had to close it up again, however, when it started to rain!  The forecast said only a 15-20% chance, but not only did it rain, but it poured there for a little bit.  We were sitting pretty underneath the awning of the three trailers that Jim, Bob, and Linda brought.  It was cloudy well into the evening, but then it cleared up quite rapidly.  I got the memorial dome set up for imaging, but no one else really pulled anything out.  The moon was still high, but I decided to go ahead and start imaging the Pelican Nebula anyway.  I got it placed where I wanted, and started taking subs.  Shortly after everyone went to bed around 2 or so, I went to go check on it, and the mount had parked itself!  I looked at the hand controller to see what had happened, and it was scrolling through menu options as if I was pressing and holding the menu button.  So I power-cycled it, but then it would hang on parts of the boot-up process.  If I let it sit, it would sometimes eventually get to where I could do stuff, but then the menu-button-pressing thing would happen again.  I tried unplugging it from my computer, power-cycling more than once, power-cycling the whole dome, unplugging and plugging back in the hand controller, and stuff like that.  But it still kept doing the same thing.  I thought about pulling out the CGEM and putting my Borg on it (since I don’t have a guidescope for the Meade 127mm that’s on there), but it was late and I knew I’d probably run into other problems or clouds would roll in or something, so I decided just to call it a night.  We figured out the next day that is was probably the humidity getting to it – we’ll have to think about what to do about that.


I did manage to get about 13x300s subs though, and the result isn’t great but there’s stuff there: 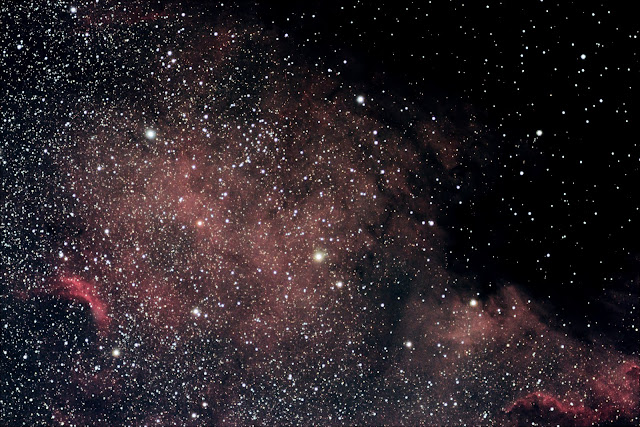 John says I need darker skies than here for it, and that I should try again at the upcoming Green Bank Star Quest.  Sounds like a plan!

Table of Contents
Posted by AstronoMolly at 9:49 AM