Before you stack your images in DeepSkyStacker, you will want to have some calibration images to get the most out of your hard-earned light frames.  Here is what you'll need, and how to get them.

Dark frames help remove that noise caused by ambient heat.  Cameras are really a detector that converts the energy of light into electrons, which your camera displays in an image as light.  The pixels in the camera chip can also be caused to fire by ambient heat providing enough energy to trigger the pixel and release some electrons.  This is thermal noise.  The hotter it is outside (or the hotter your battery and sensor chip get), the higher the noise.  It's also random - it can occur to any pixel at any time.  The longer your exposure time, the more time there is to collect this noise, and the higher the ISO, the more likely you are to see this noise.  (It should be noted here that taking longer images will ultimately get you less noise than taking many shorter ones - this is due to read noise.  See the Biases section of this post for more on that.)  It's harder to see the effect in a compressed JPEG than in the original RAW file, but this should give you some idea. 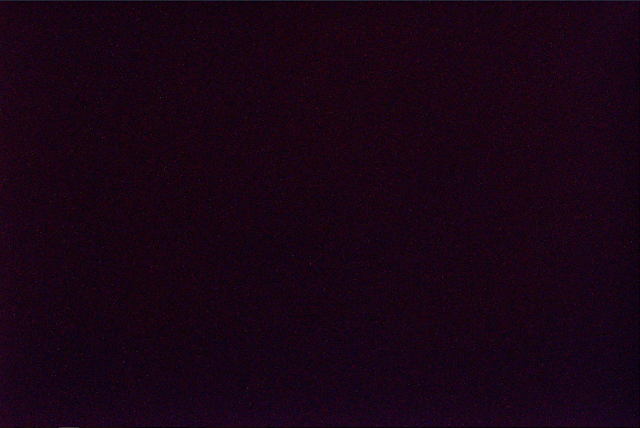 This is a 7-minute long dark frame taken at ISO-1600 when it was 80 degrees outside.

Basically, what having dark frames does for you is to help reduce both thermal noise and "hot" pixels (pixels that always fire, even when there's no incident signal).  Since noise is random, you can't perfectly subtract it, but giving dark frames to DSS tells the stacking algorithm allows it to "subtract" an average of this noise.

How to collect dark frames

Darks need to be at the same temperature, exposure time, and ISO as your light frames.  This means that if you take 30s photos at ISO-3200 and it's 65 degrees F, then you need to take your darks at 30s, ISO-3200, and within a few degrees of 65 degrees.  And, of course, it needs to be dark - light can enter in through the viewfinder and leak around the lenscap, so be sure to cover your camera with a towel and only shoot darks at night.  Generally, 20 dark frames is good enough for a good average, but some people use as many as 50 or 60.  You want a minimum of 10 or so.

Back when I only took 20-30s images, I would just take my camera off the telescope, put the body cover on, throw a towel over it, and use my remote shutter to take all of my darks while we were packing up.  But now that I take 5+ minute images, this is impractical.  So I bought a little digital temperature probe on Amazon that plugs into USB, and I record the temperature every 5 minutes while I'm out imaging.  Then, on nights when I'm not out at the observatory, I put my camera and the temperature probe on the back porch, and using a sequence I made in BackyardNikon, I take a variety of exposure times and ISOs throughout the course of the night.  The next day, I shuffle these away into folders in my "Dark Archive," one for every 2 degrees F (based on the temperature & time recorded by the temperature probe, matched with the time the image was taken), and then subfolders for every exposure time/ISO combination I usually take lights with.  I have over 6,700 dark frames saved just for my Nikon D5300, spanning 24-80 degrees F, 30 seconds to 7 minutes, ISO-1600 to ISO-6400.  I've been working on it for months.  And every camera is unique - if you get a new DSLR, you will need all-new dark frames!

What are bias frames?

Bias/Offset frames record the "read" noise of the camera chip.  The simple act of the camera's processor reading off the intensity of the light recorded in each pixel introduces electrical noise, which shows up in the image.  It looks similar to thermal noise, but is much less intense.  However, it tends to come in bands, and tends to be worse toward the bottom of the chip (also where the thermal noise is worse - it's closer to the battery and the camera processor).

How to collect bias frames

These ones are easy - set your camera's exposure time to its very shortest available value (usually 1/4000th or 1/8000th of a second), and then jam on the shutter button until you have about 20-30.  These do need to be at the same temperature and ISO as your lights, so if you take your lights at ISO-3200 and it's 40 degrees F out, then your biases need to be taken at ISO-3200 and about the same temperature.  Because these are quick and easy to take, I don't keep a library of them - I just (try to) remember to take them when I'm packing up at the end of the night (or when I change targets).

First, see my post about vignetting here.  Flats do two things for you - they capture information on the vignette profile of your telescope, and capture the dust you probably have on your corrector plate, mirrors and/or objectives, and any other pieces of glass in your optics train (to include your camera's chip).  They are not temperature-dependent, but are ISO-dependent, and very, very dependent on the orientation of your camera with respect to your telescope, as well as the configuration of your telescope.  I have different sets of flats for my C11 with a focal reducer, without one, with the Skyglow filter, without it, and different flats for each telescope I use that camera with, as well as for each camera.

How to collect flat frames

These ones require a little effort, but once you get the hang of it, they're not too bad.  First of all, you will either need to have your camera in the same orientation every time, or take a new set of flats every time you image.  Some people do it that way, but instead of the extra work, I just drew a line down all of my attaching components to my telescope with a silver Sharpie, and I line everything up every time I connect my camera to the telescope.

Next, you need a white light source.  There are a few options:
Then, you'll need to select an exposure time that puts the histogram in the center.  Most DSLRs have some way for you to view the histogram of an image you just took.  On my D5300, I press the Up key.  On my D3100, I have to go through a few menu options in the Edit section to see it.  Consult your manual.  Here's an example histogram:

On my C11 with the f/6.3 focal reducer and the Orion Skyglow filter at ISO-3200 in daylight with a towel over the top, the shutter speed that worked as 1/1250s.  Other flats of mine run as slow as 1/30s.  It depends on the telescope, ISO, other optics, camera sensitivity, brightness of the light source, thickness of the white t-shirt...so just check the histogram.  And take 20-30 of them.  It is helpful to have the telescope in focus (like from the night before) so that you can see all of your dust spots as well.

The tint of your flat frames isn't important - mine generally come out blue either because of the light pollution filters I use, or because I take them in daylight.  But DeepSkyStacker processes the flats in monochrome, so worry not.

What about "Dark Flat Frames?"

I've never used them, and the DeepSkyStacker FAQ doesn't have much to say on them.  I think you either use darks or dark flats.  Personally it's easier to take my darks when the camera is not attached to the telescope, so I'd just stick with darks.

Spend some time on your calibration frames - it will be worth your while!

Next in series: A Super-Duper Primer of Astrophotography Part 6 - Stacking Tutorial

Posted by AstronoMolly at 1:49 PM